On the 2nd I was up at 3 a.m. to drive Sylvi to the airport for a ridiculously early flight to Manchester. I'd loaded my mullet gear into the car the previous evening, and diverted back via Rosscarbery on the way home.

It was just about light enough to fish, the tide was up and water was pouring into the lagoon under the bridge. In front of the bridge a big shoal of mullet was congregated in the flow, mostly small fish but a few big ones also, mostly deeper down. I set up my float rod.

I trotted a bait through repeatedly, fishing just off bottom, but the only bites came from big gobies. After wasting a while on them, I set the float shallower ... not much action at all now but eventually one or two half-hearted bites, then a better one. I hooked a mullet, predictably one of the smallest present, not even 2lbs.

As the flow started to ease up, the mullet left en masse, first a group of bigger fish then the remaining smaller ones. It was a disappointing result given the numbers that had been present but I had plans for the rest of the day, starting with breakfast from the village shop. As I sat in the car eating it, I nodded off briefly, felt absolutely shattered when I woke up and decided I'd throw the plans to the wind and head home for a proper sleep!

Next day I did an afternoon/evening session on the new beach mark I tried in September. It looked really good to be fair but there was a total dearth of fishy activity ... I thought it was going to be a blank till a dogfish hung on at last knockings as the light faded.

I was back at Ross on the 6th, arriving mid-morning for a legering session through till dusk.

Disappointingly few mullet seemed to be present in any of the normal swims; I set up on the grass across from the hotel which seemed as likely as anywhere to produce. There were occasional showers and a fresh westerly breeze was blowing, but I was snug enough under the brolly.

The late morning passed without any action on the tips but just after lunch, as the water level began to creep up with the new tide arriving, I had a good pull on my left hand rod.

The mullet gave a good scrap all the way in, and went a very respectable 5lb 4oz. For sure I'd have taken that at the start of the day, but much better was to come.

The high tide came and went, and the water was dropping away quickly when my right-hand rod pulled over and I lifted into a very solid fish. It ran out in several short runs of about ten yards each, but I couldn't get any line back between so it ended up a long way out ... when it eventually stopped I thought, I really hoped, it was just short of the wreckage of the old oyster pens across the pool.

A period of stalemate followed, my John Wilson rod arched over, 6lb mono whistling in the breeze, till the mullet kited round to the left. It went way past the bridge, into the shallows beyond that are littered with snags including traffic cones ... but happily the fish kept on the move and I was gradually able to bring it into the deep water in front of the bridge. Another five minutes passed nervously with the fish plodding around near the bottom close in, then finally I caught a glimpse of a massive flank and soon I had the net under the mullet.

It was a wonderful new Irish PB thicklip of 7lb 8oz ...

As I slid the fish back I briefly wondered if I'll ever catch a bigger one. I've landed several heavier mullet before in England, Wales and the Channel Islands, but it's taken seven years living in Ireland to crack 7lbs here. Only a handful of 7lb+ have appeared on the IFI specimen lists over that time.

On the 8th I headed up to Kerry, to one of the marks I fish for spurdogs in the spring. I've only tried it once before in the autumn, and it wasn't great, but I fancied a change and the day didn't pan out too badly.

I arrived about two hours up the tide, just as a small boat was dropping a string of crab pots out in front! They were about at the limit of my casting range, I thought I'd probably be okay if I didn't give my casts too much welly. I decided to fish and was straight into a series of doggies which were soon onto any bait I cared to chuck out ... mackerel, herring, squid, sandeel and permutations of the same.

I was thinking it was going to be one of those doggy days but then about ninety minutes before high water they turned off like a light, and finally some better quality fish could get to the baits. Over the high water period I had three decent fish out, two thornbacks about 6lbs and 8lbs and a nice huss I would think just into double figures... 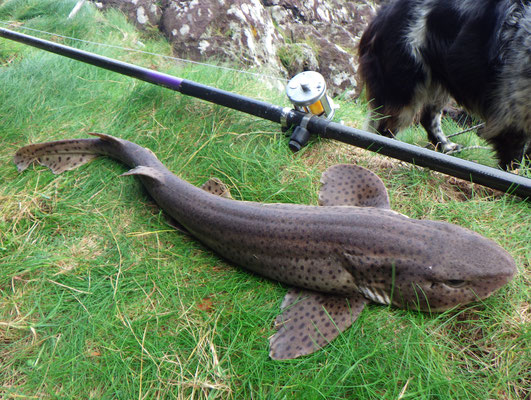 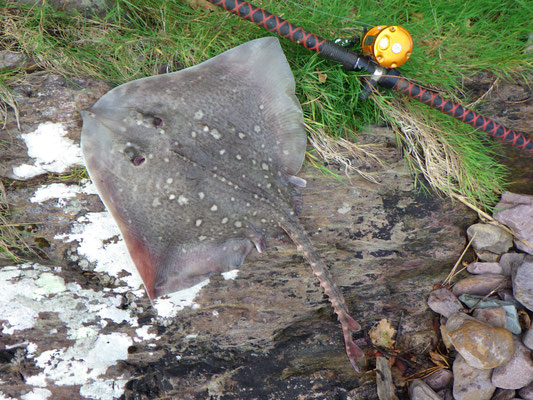 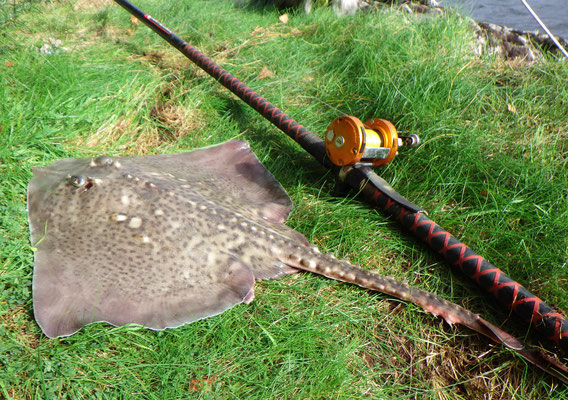 There were birds feeding out in the middle of the bay most of the day, and though they never came anywhere near in range I thought it would be worth a go for mackerel ... and fortunately, in a rare inspired decision, I'd brought along my bass rod and some sabikis for just this eventuality!

I had a string of three mackerel second chuck, and they kept coming in fits and starts. I stopped at 25, which only took about an hour and that included breaks to deal with the bottom rods. It was about as many as I wanted to carry back up the hill to the car, happy now that I'd have a decent supply in the freezer for bait in the winter and spring after such a poor showing in Bantry Bay earlier this year.

The edge was taken off the day just a bit by losing a nice fish right at the death. The tide was dropping quickly now and I'd had a last chuck with a mackerel head close in to the rock edge. The rod pulled over hard as I was tidying up the rest of my kit, the fish swam off powerfully downtide to the right then swung into the edge when I gave it some stick. Unfortunately I hadn't got it up off the bottom quickly enough and it found a snag ... huss, conger, who knows?

On the 10th I had to get Sylvi back from the airport from a ridiculously late flight in from Manchester. I planned to float-fish for mullet in the Clonakilty estuary over low water from about lunchtime, then return to Rosscarbery to leger the evening high water into the dark till it was time to drive up to the airport about 10 p.m. In the event I got a bonus hour fishing till 11 p.m. as the flight was delayed even later, but by then the day had already unravelled.

I arrived at Clonakilty to find the estuary channels had all changed since I last mullet-fished there in the spring. The low water pool where I'd caught so well last winter was gone completely, in its place just a straight, shallow channel with a strong flow through. I drove lower down where the channel is generally deeper but I couldn't see any mullet moving at all. I decided to head back to Rosscarbery early and have a session in the lagoon before getting back to the original plan.

Unfortunately the numbers of mullet in the lagoon seemed to have fallen off a cliff since my last visit in September and I could only muster one bite. It was a decent fish about 4lbs but the hook pinged out just short of the net. My rig flew back towards me and the lead whacked me right on the kneecap, some days you know your luck's out!

As dusk fell I headed up to the village to get chicken & chips from the takeaway, then set up to fish from the back of the car off the wall down the west side of the estuary pool. I've night-fished for mullet before but not for about twenty years, so this was going to be a steep relearning curve. The first thing I learned was that the chemical starlights that I'd carried around in my tackle box for years didn't work. I checked the packets, use by Nov 2017! Fortunately there was a big full moon which was enough to see my rod tips, and I'd brought a functioning headlamp for close-up work. The second thing I learned was that I should have paid more attention to the weather forecast ... the air temperature dropped like a stone, reaching 3degC by the time I packed up, far colder than recent nights. Although I'd see occasional big whelms from mullet in the moonlight on the mirror calm surface, I didn't get a bite. It was a relief to pack up, chilled through, and pump up the car heater for the drive up to Cork.

I was back at Rosscarbery on Friday 14th, with Sylvi, sneaking in a session before what looked a very unsettled spell of weather on the way. In fact the weather was already on the slide on a chillier and more blustery day than the forecast had suggested and with outbreaks of rain.

Nothing much was showing out in front but early in the afternoon I missed a drop-back bite on my left-hand rod. I cast a new crust bait back as near as I could to the same spot, and this time had a good pull-down bite. The fight was pretty much a "lite" version of the one I'd had from my 7:08, and Sylvi netted the fish for me over by the bridge again. I thought it would go over 5lbs but the scales wouldn't stretch past 4:13...

Soon after, while Sylvi was taking the dog for a walk, I had a take on the other rod and landed a little mullet about 2lbs. Unfortunately either bending down to unhook it, or to put it back, I pulled something in my lower back. It seemed innocuous enough at first but  got steadily worse through the rest of the afternoon and overnight. It ended up very sore for a week till miraculously it was suddenly better one morning ... just in time for me to come down with a miserable non-covid cold that Sylvi also had. All this has coincided with the start of my seasonal exam work, so I've not been fishing since though, to be fair, the weather has been so unsettled I doubt I'd have been out much anyway. The exam work carries on all through November but I hope to get a few sessions in when the wind and rain allow.