Only really a half report though - the last fortnight of the month we've been visiting family and friends in the UK and I've been taking a break from fishing.

Given the reduced time available, I wanted to get a July mullet under my belt quickly so on the 2nd I headed to Rosscarbery. In hindsight it probably wasn't the wisest venue choice, the estuary pool being short of water on the neapish tide, with calm and bright weather.

I set up along the west side where there seemed to be a fair amount of mullety activity, though most was from small fish with just the odd bigger whelm further out.

I launched two leger baits out as far as I could but it was very slow, just the occasional knock on the tips that could have been line bites or attention from tiddler mullet. Eventually a little breeze kicked up which seemed to help. I had a better bite and struck into a fish - it was a mullet so job done in that respect - but it was barely a pound in weight. A few minutes later I was into another that may have been a shade heavier, but it threw the hook as I was reaching for the landing net. The breeze dropped, I was becalmed again and the mini feeding spell was over. I still had a few odds and ends of exam work to finish off so I decided to call it a day.

I was out early on the 4th to catch the high water on a new spot from where I'd had reliable reports of thornbacks.

The first ninety minutes passed uneventfully, just some tiny nibbles on the baits that may have been from something like pin whiting and worrisome amounts of weed coming back on the leads and baits.

Then as the tide topped I had a big slack line bite on bluey on my right-hand rod. I wound down and struck but missed whatever it was. While I was baiting up that rig again, the mackerel bait on my other rod was taken and the rod pulled right over.

The ray gave a good account of itself, especially close in where it dived repeatedly for the bottom. But soon it was flapping on the surface under my rod tip and I scrambled down the rocks to land it. It was a really thick thornback that went 9lbs 8oz. I've had some heavier in UK but it was a new PB in Ireland, well happy with that.

The fishing died a death as the tide dropped away, but I had an extended "chat" of sorts with a Ukrainian gent who approached me. He had been in Ireland less than a week and only knew a very  few words of English but he spoke into his smart phone in Ukrainian which translated to English on the screen, then the reverse for English to Ukrainian. It was slow progress but it soon became clear he was an angler. He showed me pics on his phone of catfish he'd caught from the Dnipro River, I showed him pics on my camera and did my best to explain the local fishing. As I was packing my rods away his wife turned up who spoke better English - their home had been levelled by Russian missiles and their son is fighting in the Ukrainian army - it's a dreadful situation and seems another world altogether from the west of Ireland.

On the 6th I took the big rods out onto the rocks in Dunmanus Bay. There was a fresh west breeze so I chose an east-facing mark that has been kind to me in the past, producing several double-figure huss. It seemed properly out of form today though. High water came and went with nothing to report; I wished I'd braved the breeze and chosen a deeper mark with more movement in the water. Eventually I had a couple of knocks, both from very modest strap congers... 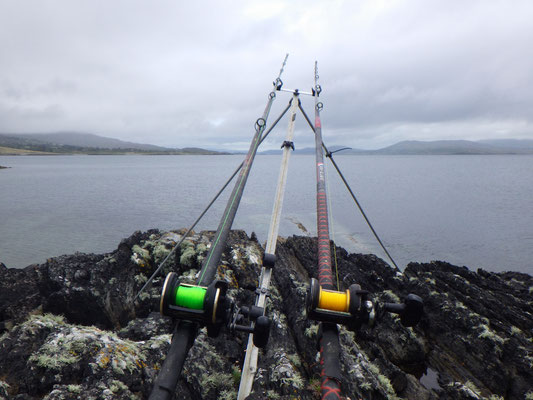 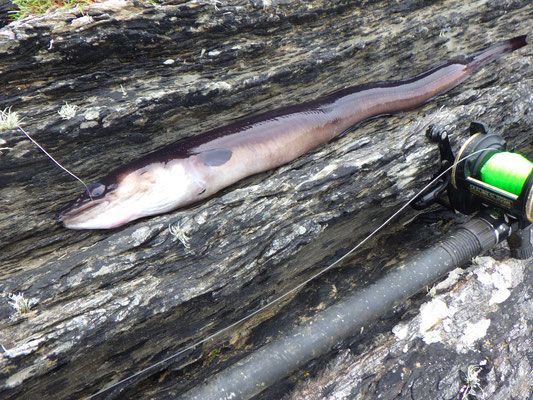 On the 10th I collected some limpets and headed onto the mark in Bantry Bay where Mike Buckley and I had caught triggerfish last year. It was probably a couple of weeks early for the triggers to show (if they show at all) but I thought I'd give it a look as we'd be away later in the month, and there should be wrasse for back up.

The triggers didn't show, and the wrasse fishing certainly didn't shine either. To start with it was just occasional tiny bobs of the float as small ballans or corkwings nibbled the soft parts off the limpets. As the tide built, I started to get some better bites, but not many and only fish to about 2lbs.

I don't do a lot of wrasse fishing but the impression I get is that it's become significantly harder in the seven years we've been in Ireland. I think you could still build a decent bag if you invest in premium baits like ragworm or crab, but the days seem to have passed

when you could rock up with a bucket of limpets and expect to catch a dozen nice ballans. There's just not the numbers of them competing for food. It's difficult not to point the finger at the guys trapping juvenile wrasse to act as cleaner fish in the salmon farms. It must cause a gradual attrition of the stock, and as a fishery it is barely documented let alone properly regulated in Ireland.

Today's session was rescued to an extent by some respectable pollack in the 2 - 3lbs class that took a fancy to a garish "Tequila Sunrise" Redgill on the dropping tide after the bites on float had dried up again.

Next day I was out in Bantry Bay again, this time on my low-water mullet mark. It has been in decent form this year for mid-weight mullet, and it didn't disappoint today with another four between 2 and 3lbs. I'd probably have had more but same as last year, the pollack numbers seem to be swelling as the season progresses and they definitely get in the way of the mullet fishing. 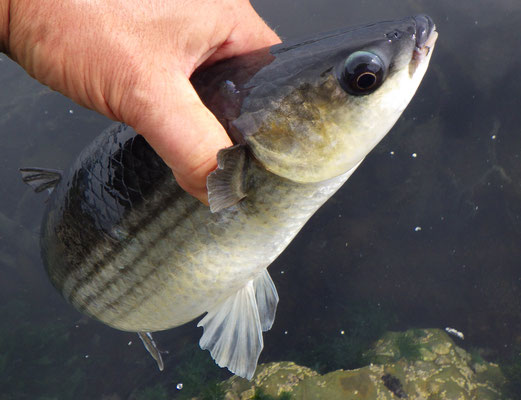 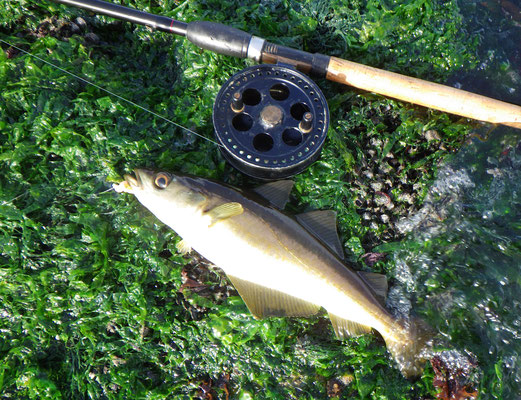 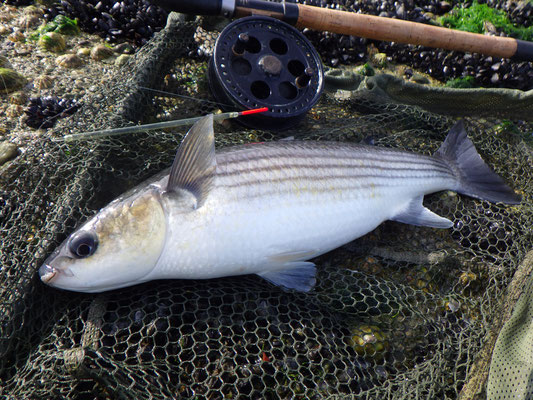 On the 13th I was out on another Bantry Bay mark to try for mackerel. They haven't really shown in any numbers till well into August the last few years but I'd heard some reports of sporadic catches this year so I thought I'd give it a try.

It was choppier than I expected on the north side of the peninsula there, and the first thirty minutes passed with only a couple of tiny pollack on the sabikis.

Then a single mackerel, then another, then a busy hour when I was picking them up every two or three casts in twos, threes or fours.

I stopped at 35. They were a couple of distinct sizes, some really chunky ones about a pound and others I'd describe as big joeys.

In among the mackerel, a single sardine, my first ever... 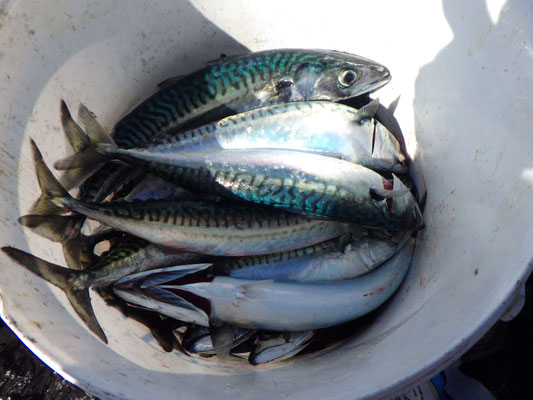 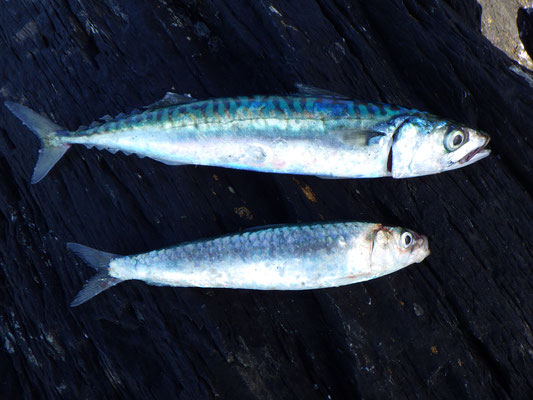 We had a nice meal from the bigger mackerel and I froze down the rest for bait. I was back the next day for more freezer fodder, and thought I was in for a beano with a string of four mackerel second cast. That was the best of it though, with long quiet spells punctuated by occasonal mackerel one and rarely two at a time. Eventually I got up to twenty and called it a day at that. Interestingly I'd also had another sardine, a few millimetres bigger than yesterday's so technically a PB ... 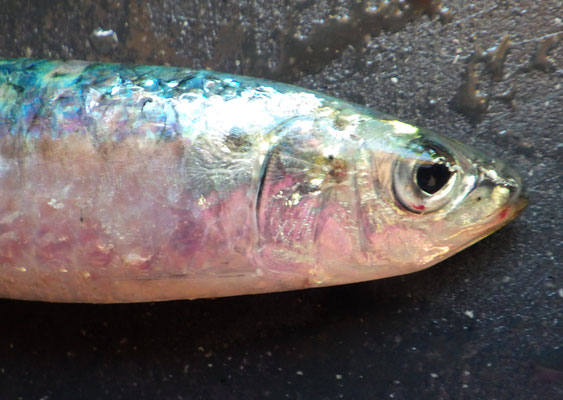 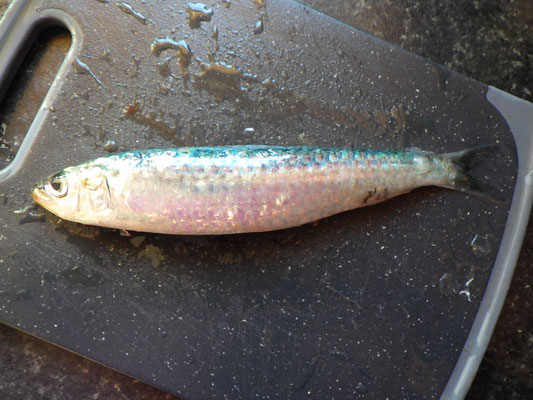 It seems a bit odd to be catching them one at a time, I'd have thought they should go round in shoals by the million. Maybe it's just a few individuals got mixed up in the mackerel shoals somehow.

By the 15th we were getting ready to go away, but I sneaked a couple of hours on yet another Bantry Bay mark. I had some intriguing new crayfish plastics I wanted to try for wrasse, but bewilderingly I couldn't get a touch on them. The trusty old Redgill came to the rescue again ... the pollack were really hugging the bottom in the bright sunshine but fortunately it's not too snaggy on this mark till close in, so I could bump the 'gill in most of the way. Among some smaller fish I had three or four around 2lbs and finished with a lovely fish just over 4lbs. 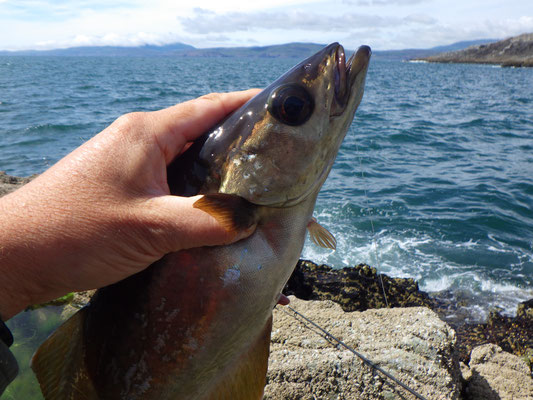 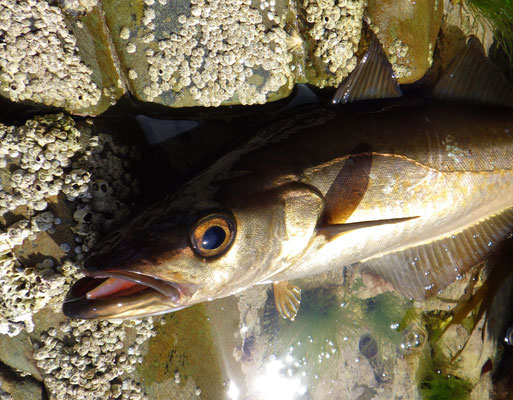 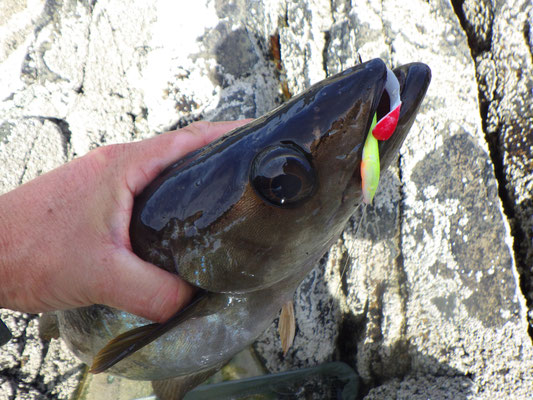 We'll be back in Ireland from early August - it will be good to be fishing again but it's going to be mostly mulleting for a few weeks, with a succession of mullet-oriented friends over from England till well into September.