It wasn't going to last, but February did at least get off to an encouraging start.

On the 1st I headed down to Rosscarbery. Most of the estuary pool was raked by a strong and chilly north-west wind, but I found some mullet in the shallows in the semi-shelter of the west bank.

I hadn't had much luck with the mullet in this swim on recent trips, so it was a relief when one of my leger rods yanked over after only about fifteen minutes. It was only a small fish, not even 2lbs, but it was a mullet to keep my successive-months run going , and it was caught the proper Irish way fishing out of the back of the car!

Despite this early success, the mullet weren't really in a feeding mood and although I had plenty of fish in the swim I couldn't get another take. Three hours dragged by but there wasn't really another viable spot to move to so I stayed put.

After lunch I was momentarily distracted by a car pulling up in front of me. David Norman of West Cork Bass guiding fame climbed out to have a chat, just in time to see me grab one of the rods as it threatened to pull over the wall.

It was a powerful fish that ran out strongly in a series of spurts. David took some photos but alas the mullet found a snag in an area where I didn't realise there were any. After several steady pulls my rig came free but the hook had bent out of the fish.

We chatted for a while then David drove on to investigate lower down at the sea. He was barely out of sight when I was into another mullet, about 3lbs. It was still recovering in my net when David drove back up, and he took the photo for me...

We talked a while longer, then David went on his way.

I still had some mullet moving in my swim, and I was hopeful of further action.

I'd occasionally see a big shoal further out in the pool when they spooked at a bird and splashed on the surface. Very gradually they seemed to be edging closer to me, then suddenly they were in range and I had whelms everywhere in front.

A hectic hour followed with line bites, a couple of mullet hooked and lost, and four more landed making a total of six for the day. They were 2lb and 3lb size fish with the best 3:10 and 3:12 - all good fun though it was a pity I lost the one in the snag earlier as that had seemed in another class altogether. 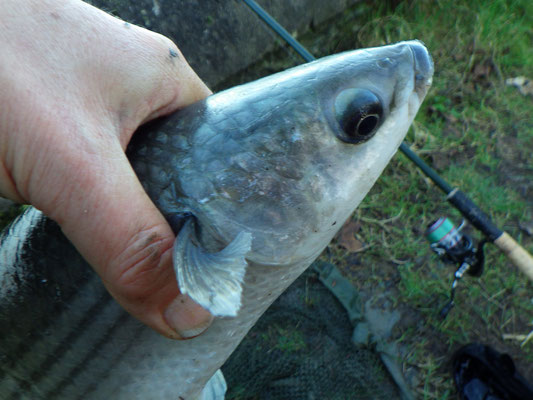 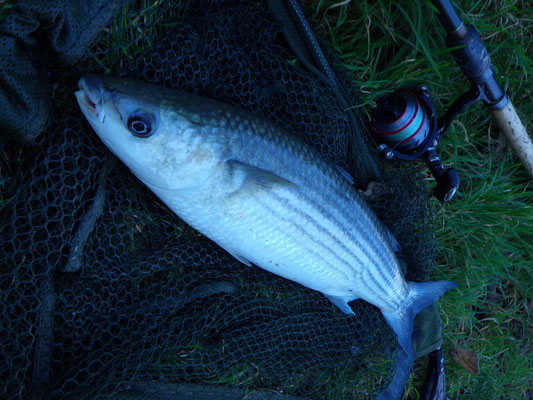 David does some mullet fishing in winter, using fly tackle, and he's had some success on milder days getting fish feeding on the surface then targeting them with a bread-fly.

He left me one of his home-tied flies to try. It certainly looks the part ...

I'm not quite sure what to do with it but I think I'll probably save it to use later in the year  in a swim where the mullet occasionally have a go at bread flake as it's retrieved. I've hooked a couple like that and had enough other bumps to convince me it wasn't a fluke ... usually the bread just comes off the hook but I fancy the bread fly slowly retrieved behind a small controller float might do a job.

On the 2nd I headed up to Kerry for another spurdog attempt. I was joined by my friend Stephen again but just as the last time he came down from Cork, it was a desperately slow day with very few bites. The water was unusually clear for this area after all the settled and dry weather through January, and I think this wasn't helping the fishing, at least in daylight.

Also just like last time I fished with Stephen, I was fortunate enough to bag the only decent fish of the day, a chunky huss. It wasn't badly hooked at all but coughed up some blood while unhooking. I wanted to get it back into the water quickly so didn't weigh it, I'd say it was 8 - 9lbs. Hope it was okay.

I'd thought I might go back the next week but I read the Caha Tunnel was closed again for repairs after someone had damaged it with an overheight vehicle. I knocked that idea on the head and went mullet fishing instead.

It had seemed a nice day in Kilcrohane but out on the Mizen the wind was a little fresher and, as it clouded over, it verged on the bleak. I blanked in one swim where the breeze was straight in, and moved to another where at least it was running across and I could just about get my back to it. After an hour patient light feeding, I had a couple of bites and hooked into a pristine thicklip of 3:04.

The rest of the month was a write-off for fishing. Sylvi's car was off the road for repairs - it took the garage an age to source a new fuel pump - and as she needed a car most days that clipped my wings fairly effectively. And the weather finally broke into a really rough spell including named storms Dudley, Eunice and Franklin in rapid succession.

I'm mobile again now, and the weather has calmed down somewhat. I've already had an interesting session on 1st March but I'll save that for next time.