We weren't back from our UK trip till the 21st. We'd managed to avoid catching covid over there, so we passed our tests and were allowed back into Ireland, albeit both with a really unpleasant cold we'd picked up along the way and which still lingers on...

I didn't feel fit for much with the cold and tired after all the travelling, but on the 23rd I headed down to Rosscarbery to try to catch a December mullet. There was more water in the pool than I expected, rainwater probably, and I had to hunt around for signs of fish. Eventually I found some in the shallows down the west side.

The mullet were present in reasonable numbers and seemed quite active, but I couldn't get any interest apart from a few trembles on the tips that I put down to fish swimming over my lines rather than attention on the baits. After a couple of fruitless hours I packed up and headed over to Clonakilty hoping to find some more obliging mullet in the estuary there. That proved a complete waste of time, no mullet at all to be seen, so 90 minutes later I was back at Ross for another go in the remaining couple of hours of daylight.

I set up on the foreshore in front of the causeway east of the bridge. The water is very shallow along there and despite the lop on the surface I could see a few mullet moving. They seemed dotted all over the place so I fished one rod close in and the other further out.

The thick end of an hour had passed when the close-in rod pulled down decisively. The fish came in quite easily and I was surprised by its size when I got a glimpse ... it surged out again and put up a stubborn scrap for a good few minutes before I could beach it. It went 4lb 3oz on the scales.

A few minutes later I had a delicate but persistent bite on the same rod, now fishing a bit further over to the right away from the disturbance zone of the first fight. I struck and was in again but after a few seconds the fish found a snag. I could feel the fish still there but it seemed well stuck so I waded out to free the line. The water was only knee-deep so this wouldn't be a problem, apart from getting my feet soaked as I hadn't bothered with my waders! The line was tangled round a traffic cone of all things, lying on its side ... I soon had the line off, retreated to the bank and played the mullet in without further mishap. Another decent thicklip of 4:00. 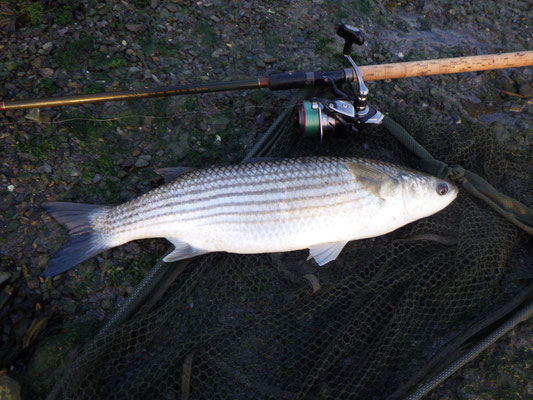 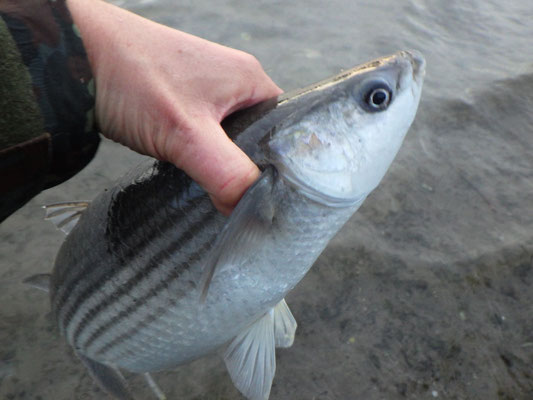 With the light failing and my soggy feet, I decided to call time on the session.

On St Steven's Day Sylvi and I saw a lot of mullet in the estuary down near Mizen Head as we were walking down there with the dog. It was a lovely sunny day in an exceptionally mild spell of weather, so no great surprise I suppose. I wanted to try for these fish but next day a depression tracked along the south coast of Ireland and the easterly wind and rain on its north edge wasn't very appealing.

By the 28th we were back in a westerly airflow at least, but the water had been coloured by the rain yesterday and there were no mullet showing on the ruffled surface on this grey and blustery day.

The resident otters had been busy, leaving plenty of mullet scales scattered about, and judging by the size of some of them they'd had a few big fish out. This was encouraging in some respects, discouraging in others, and ultimately there was no immediate way of knowing if any mullet remained in the pool to catch today.

After a couple of hours trotting a float through to zero effect it certainly wasn't looking good. The flow was a little faster than ideal, probably down to rainwater still running through. It was quite hard work and I decided to have a break for a coffee before a last hour's effort. I put my rod down with the float dangling in the margins ... and the float immediately plunged under!

It went a foot down but was already coming up by the time I'd got hold of the rod again. Fortunately it went again, I struck and was into a good fish. The scrap went on for ages, a lot of it spent with the mullet trying to bury itself into the undercut bank beneath my feet ... at times like this I really appreciate the extra couple of feet on my 15' Preston float rod to keep the line out of trouble. The fish eventually weakened, and I got the net under it.

I hoisted the mullet to show it to a driver who'd stopped on the causeway to watch the fight, then put it onto the scales ... dead on 5lbs.

There was a stroke of luck to the capture to be sure but I'll take that any time. The fish displaced a 3:09 from my NMC Top Ten, giving me a aggregate 52:08 for my best ten mullet of the season with a maximum four from any one venue ... not bad at all!

I wish a very Happy New Year to all my blog readers and will see you back here in 2022.