Just a brief mullet-only report this month. I've not been doing much with my seasonal exam work underway.

I started off with a session at Rosscarbery on the 5th. It was a grey but mild day, and on arrival I could see a few mullet moving in front of the grass.

I soon had my leger baits out and after a few abortive plucks on the tips, finally a good take. After a spirited fight I landed this chunky 4:15.

A short while later I had a smaller fish about 2:08 but after that the fishing petered out. After lunch I decided to drive over to Clonakilty for a look round the estuary there.

I had a browse around a few spots about Ring but didn't see any mullet, then I found a few in really shallow water as I drove back up towards Clonakilty town. I gave them an hour or so but they were really skittish and I couldn't get a take despite at times having fish all under and around my float.

I decided to head back to Rosscarbery for a last hour into the dusk. The tide was up now and I was just set up and fishing again when a large seal stuck his head up right in front of me. I don't suppose it was the first up there nor will it be the last, but it was the first I've seen in ten years fishing on and off at Ross. It's only three feet deep even with the tide in, and I could see the seal exploring all round the pool from the hump of water he was pushing up in front of himself. He didn't seem to be catching anything to be fair but the mullet understandably made themselves scarce.

I was intrigued by the fish I'd failed with at Clonakilty, and decided to head down on the 7th for another try. I spotted a couple groups of fish on the drive down the estuary, but decided I'd have plenty of time for them later and chose instead to go for a few fish that were showing at Ring.

I got a bit engrossed as it's easy to do mullet fishing and in truth spent too long trying for what was only a handful of fish that weren't particulary interested. I had a few half-hearted bobs of the float and did eventually land a mullet that was barely 2lbs.

By the time I'd returned to the fish further up the estuary I was limited for time ... I had a nice 3:07 before the flood tide surged up the channel and the fish disappeared with it.

I was back on the 20th for another attempt, on the last day before a cold snap was forecast. This time I stopped for a go at the first fish I found, in a long pool that is effectively cut off over the low water period, with just a very shallow channel in and out. And today there were many hundreds of mullet present.

I set up with a dumpy little float that trotted through beautifully right to left on the flow of fresh water through the pool. It took a while before the fish showed interest, but once they did it was steady action. I'd catch one then move a few yards along and eventually amassed nine, losing a couple of others. 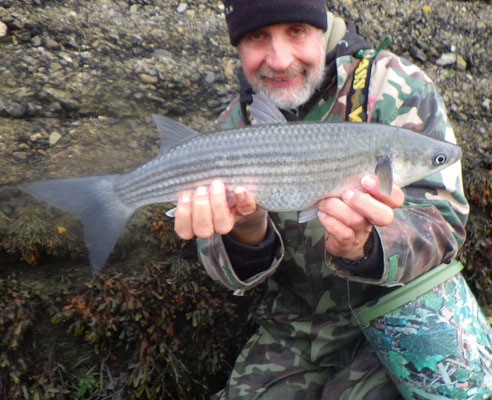 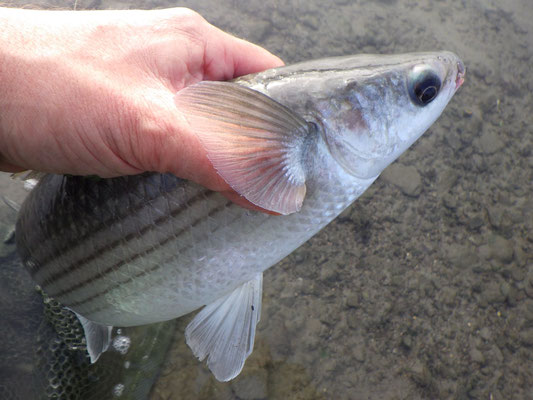 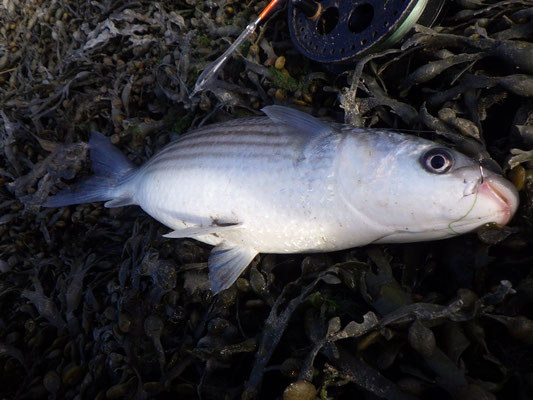 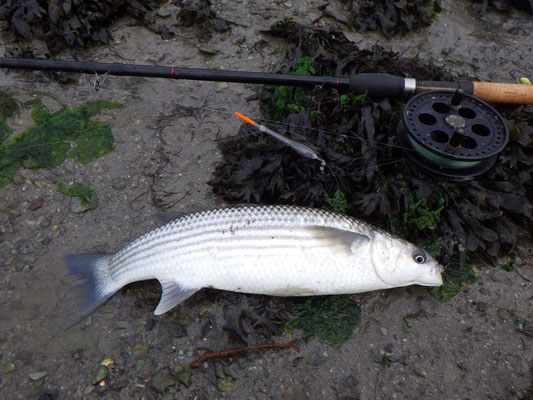 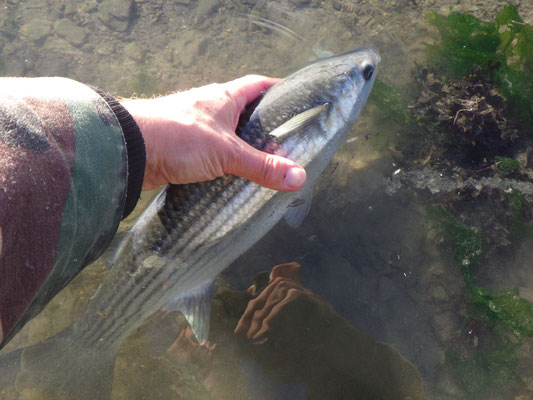 The mullet were all 2lb-this and 3lb-that.  There was definitely a smattering of bigger fish present judging by some of the backs and tails I saw, and ideally I'd have liked a couple of 4s for my NMC Top Ten. That wasn't to be but it was still great fun catching these fish especially on the float and centrepin.

The cold snap did arrive and a couple of nights with really heavy frost followed. Nevertheless I was keen to have what would be a last go for a while - a proper Arctic blast from Storm Arwen was on the way and soon after that had passed we'd be having to travel to UK for an extended trip. So I headed back down on the 23rd.

The mullet had evacuated the pool where I'd done so well before, but this time I found good numbers lower down the estuary. The conditions were very different - a perishing cold day despite the lovely sunshine, the water now felt at least five degrees colder than last trip and was much clearer.

I was surprised the mullet fed as well as they did given the sudden drop in temperature. Despite missing a load of bites and three fish shaking the hook, I landed another five, though again they were on the small side. 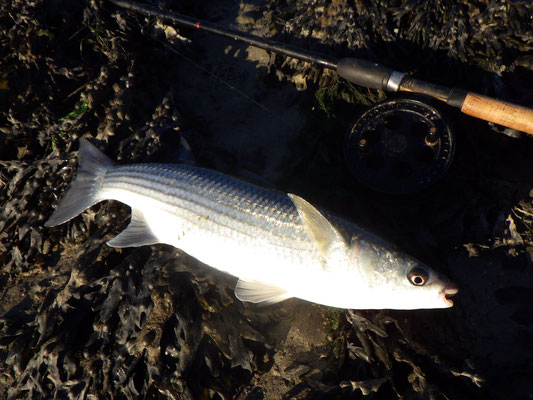 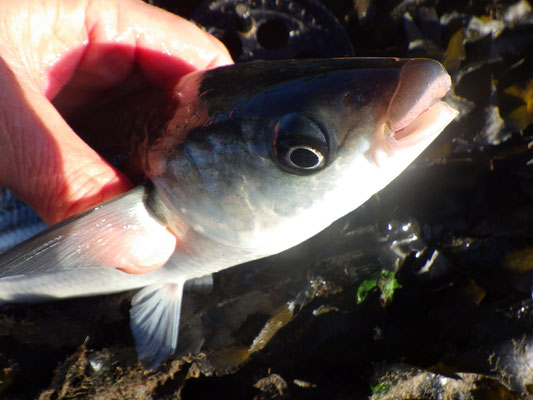 I won't be back in fishing action again now till nearly Christmas - hopefully there will be enough time left in the month to catch a December mullet and maybe get started on the spurdog season.