A slightly truncated report this month with fishing opportunities limited by a variety of factors.

The 4th was a rainy day but it turned to showery late on, just in time for a quick pollack session down in Dunmanus Bay.

There were plenty about, with bites on most casts. I kept a fish about 3lbs for eating, and put back a couple similar. The rest were all pound-size or smaller.

The already short session was shortened still further when a massive bull seal appeared. He chased a small pollack I was winding in almost to the rocks, then stationed himself just off daring me to get anything else past him. 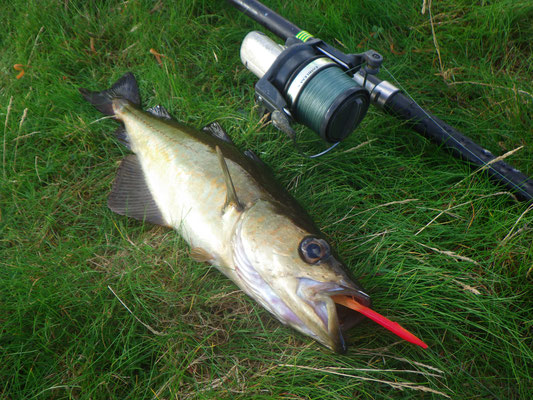 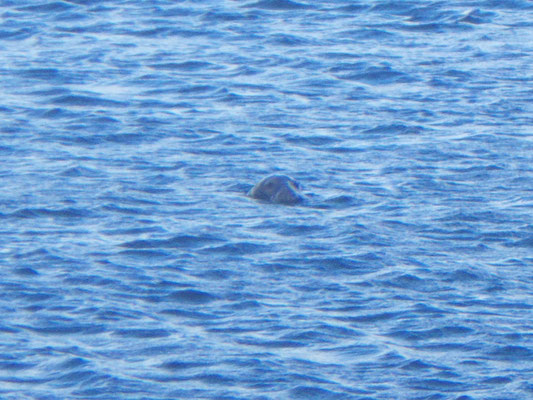 On the 5th I was down to Rosscarbery to try to get an October mullet under my belt.

The slow form from late September carried over, with only one definite take in a long session legering at range. About lunchtime my left-hand rod nodded then the line dropped slack. I struck and connected with a lively thicklip which turned out to be 4lbs on the button.

As the afternoon drew on the tide flooded into the estuary pool and I was soon forced back across the grass. I dropped my baits closer in, only two or three yards past the rocks at the

margin, a tactic that had produced a couple of bonus fish in recent sessions. It worked again today as it turned out, when my left hand rod suddenly yanked over and a big mullet splashed on the surface. The fish never ran far out but the fight seemed to go on for ages. It was a lovely 5:13.

My next couple of mullet sessions were disappointing really.

It was a stunning day on the 9th, following some foul weather the previous day and overnight. The small pollack seemed to be gone from my low water rock mark in Bantry Bay but unfortunately the number of mullet didn't seem to have increased at all. I had a couple of chunky mackerel then finally a thicklip about 2:08 almost on dead low. A line of surface debris - leaves, sticks and other dross - moved in with the first of the flood tide, not in itself too much of a problem but the water behind the scum line was a thick, peaty brown. Obviously this lot had come down one of the streams off the hills in the heavy overnight rain, and not yet mixed with the seawater in the bay. The session turned from hopeful to hopeless in the bat of an eye.

On the 11th I arrived at "Mike's Pontoon" to fish the low water, having failed to locate a mullet in an hour session on Rosscarbery Lagoon on the way. The low tide proved lower than I expected, leaving not a lot of depth under the pontoon and apparently no mullet in residence. As the tide started to flood back in, I started to see whelms and splashes in the margins behind and upriver of the pontoon. They didn't look big fish but I didn't want to blank so I gave them a go. They proved tricky with not much interest in bread and just an occasional half-hearted dip of the float. The reason became clear when I finally connected with one ... a golden grey. Mine was only a pound but some of the others in the shoal would have been comfortably over 2lbs and I was left regretting I didn't have any more suitable bait such as maddies. 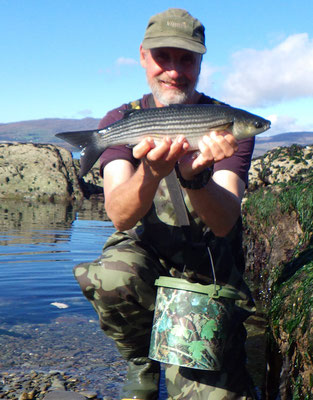 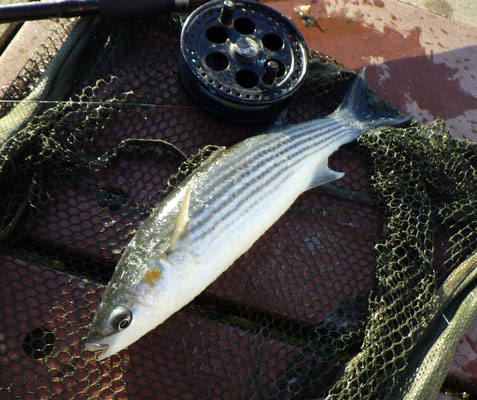 On the 14th I was out on a deep rock mark on the north side of the peninsula. It was nice to have the big rods out again but it wasn't the greatest session.

The highlight really was a small group of dolphins passing by right to left almost in touching distance of the rocks, it's special at any time to see them but particularly this year when there doesn't seem to have been many in the bays.

Fishingwise, the LSDs were out in force from the word go, a bite a chuck and I landed five or six. As the tide topped out I had a couple of better takes, and two huss about 7 or 8lbs. I've had many bigger but probably none so attractively marked as the leopard-spotted one in the photo. I was under orders to get a pollack for supper, which only took a couple of casts with a Redgill as the tide started to drop away. 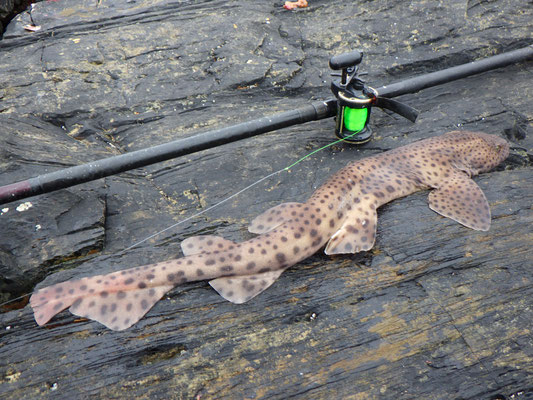 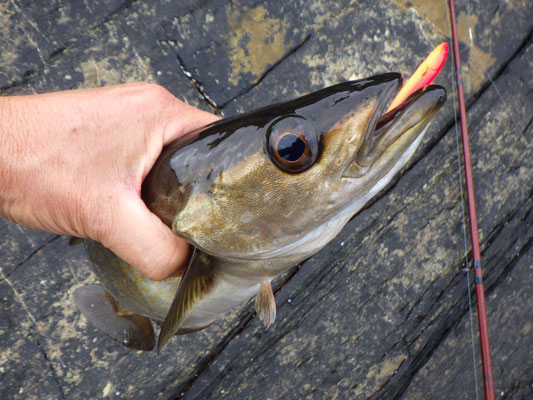 On the 18th I had to drive Sylvi up to Kerry Airport - Cork being closed for rebuilding the runway - for her autumn trip back to England. It was an early flight so I had the better part of the day available. I headed to one of my spurdog marks, more in hope than expectation of a spur at this time of year but it's not bad general fishing.

It was a miserable grey day with outbreaks of rain and a fresh breeze pushing onto the shore.

For the first couple of hours the crabs were stripping baits almost as fast as I could cast them out, then for another hour they were replaced by LSDs.

Just after lunch I struck into a typical LSD bite on my last sandeel bait and found myself connected to something heavy. It pulled harder and harder as it came closer to the rocks in typical huss fashion ... then let go of the bait under the rod tip. I caught a glimpse of a long pale belly as it rolled over and dived away. It's a big huss speciality spitting the bait and hook this way but for some reason it seems to happen a lot on this mark. This one had taken the bait from the wrong end, the hook had turned and was tangled back up the trace. I'd undoubtedly land more with a Pennell rig but it's challenging enough wrestling the huss to get one hook out without the added danger of another one flailing about.

I fished on using squid/frozen mackerel cocktails without much happening apart from sporadic LSD attention. Then a mackerel took one of the baits as I was winding in, bolstering the bait supply.

I put a fresh mackerel fillet out on one rod, a whole small squid on the other. It was the squid rod that pulled down decisively. The fight was very reminiscent of the huss so it was a slight surprise when a diamond shape appeared under the rod tip, a nice thornback about 7lbs.

The fresh mackerel baits seemed to have started the crabs off again, so after a couple more casts with stripped baits I put the mackerel head on and dropped it not too far out. After twenty minutes or so it was taken, and the rod pulled hard over. I felt the weight of the fish just for an instant, then it was gone. The head had a big bite mark across it, just missing the hook. Another good huss I'd say, or possibly a conger. I chucked the head out again, but no further interest.

I'd have stayed longer into the evening but with the Caha Tunnel closed for maintenance and an hour-plus diversion either through Castletownbere or a similarly tortuous inland route, I wanted to get the bulk of the journey on unfamiliar roads done in daylight.

The next ten days or so were written off for fishing - my exam work kicked off for the autumn season, I managed to pull a muscle in my back which laid me up for a few days, then some very poor weather.

I finally made it out again on the 30th, just some light mullet fishing as I was still dubious whether the back would hold up.

I headed to Rosscarbery on a very autumnal day. Considering all the recent rain, the water was remarkably clear, but it felt cold. On looking around I found a few reasonable fish just outside the bridge arch in the flow from the lagoon. I went back to the car and fetched my float rod, fed a little mashed bread, and was hooked into a nice fish after only three or four trots through. It was a lively thicklip of 3:08.

The rest of the shoal had dispersed with all the commotion. There was an odd fish or two showing in front of the grass to my right, so I fetched my leger gear and set up under the brolly. I fished the neap tide up to high water and back down a way, but to no effect. I think it's a bit between times at Ross, the bulk of the summer fish gone and the winter shoals not yet arrived.