As mentioned last time, my old friend Mike Buckley is over from UK on an extended stay. On the 12th he joined me for a session on my low-water rock mark in Bantry Bay which proved to be in spectacular good form. It turned into a proper mullet-fest as we shared eleven between us and lost a couple of others. Mike won 6 - 5 on numbers and we drew on best fish with a 4:04 each. 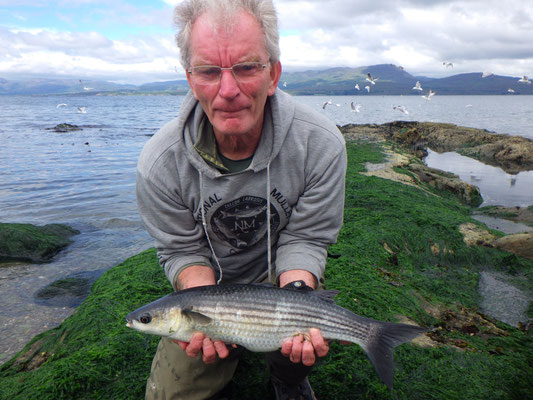 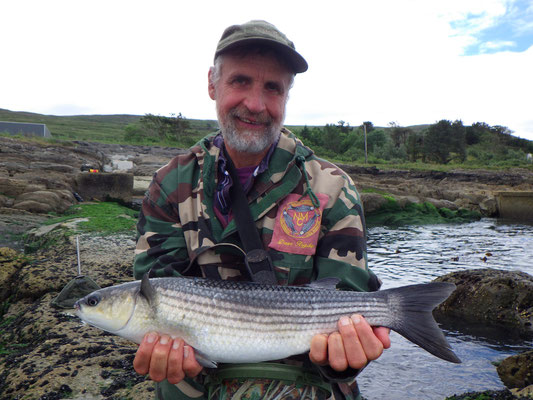 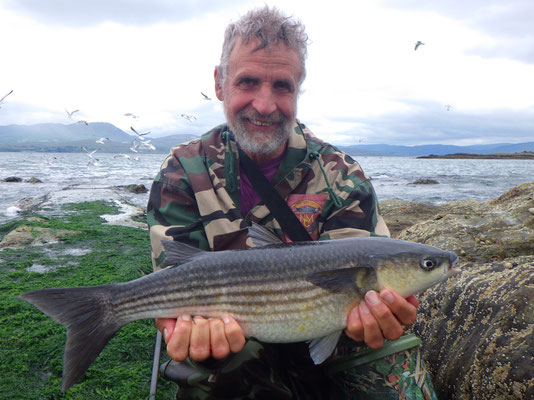 A couple of days later we were at Rosscarbery in time for the morning high water.

Mike took his float rod down the west bank, I set up my leger rods near the bridge arch.

After a very quiet couple of hours I went up on to the bridge for a look and could see numbers of mullet cavorting in the flow pouring into the lagoon.

I quickly set up my float rod and started trotting baits in towards them, accompanied by loose-fed bread mash. I started getting bites, but not many considering the number of fish there and only at the last instant before the float would be accelerated away over the rocks and under the bridge.

Mike arrived having struggled to find fish lower down, and gave me a running commentary from the bridge on the size of mullet around my bait! I missed a few bites  then hooked one, a nice 3:03 thicklip which gave a lively scrap once I'd bullied it away from the bridge.

Mike took his float rod further along the causeway, I carried on fishing where I was but the number of fish diminished as the flow into the lagoon died away and I only had a couple more bites. Soon I returned to legering.

It was still quiet on the bottom, but after an hour or so I started getting little knocks and taps, and eventually some better pulls. A golden hour followed when I hooked six mullet, somewhat tarnished by losing three of them including two decent fish right at the edge and a probably very large one - I pulled the hook trying to keep it out of the old oyster pens way across the far side of the pool after a series of powerful runs. The ones I landed were 4:11, a lovely 5:12 and a little one about a pound. 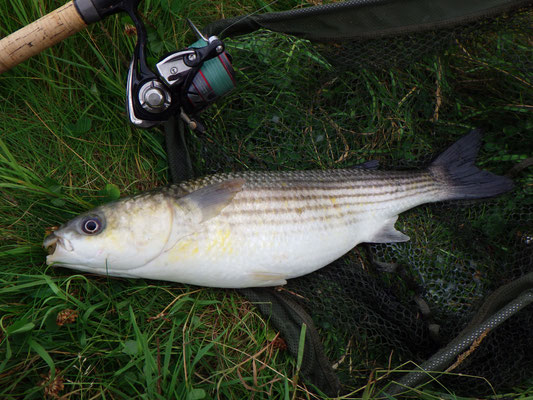 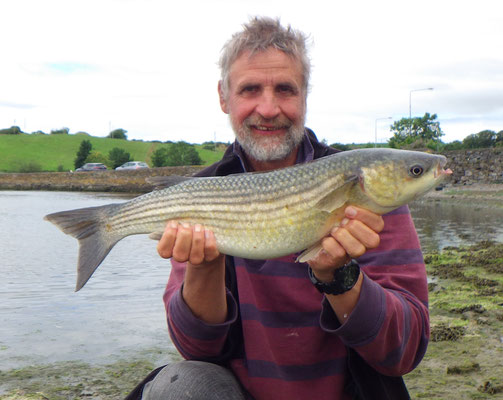 And then the heatwave arrived, and the mullet fishing took an immediate turn for the more difficult.

I left the Bantry Bay mark to Mike. He visited it a few times and caught every trip, though with far fewer mullet and, on some days, nuisance quantities of small pollack.

A baking afternoon session at Rosscarbery yielded me only one small mullet. I decided I'd go back a couple of days later for a morning session before it got too warm, but it was already uncomfortable by the time I was setting up at 7.30am. By the time Mike arrived after breakfast it was sweltering and he decided not to fish. I caught just one small mullet again before deciding at lunchtime I was cooked enough. In the meantime Jason had arrived and fished a couple of hours, catching a fine 6:01 just to prove what was possible.

I was back at Rosscarbery on the 28th to fish with Mike again and Jim Murray. The weather had broken and was more traditional Irish now with a west breeze and heavy showers, but the mullet were still playing hard to get.

There was a big shoal again in the flow into the lagoon at the top of the tide, fish of all sizes including some that looked 5 - 6lbs. Mike had a go at them on float, but only the smaller ones seemed to be feeding. He landed one and lost two others, nothing over 2lbs.

Meanwhile Jim and I were getting tentative knocks on leger. These also proved to be small mullet. We had a couple each, including this impressive double-shot. Mine's bigger than his, it has to be said.

I was lucky enough to catch the only proper-sized mullet of the day after a powerful bite on the 'tip. The fish came in relatively easily then slogged away for ages at short range in the deeper water in front of the bridge, benefitting from the flow of water out of the lagoon. When it finally surfaced and Jim got the net under it I was expecting it to be bigger than its 5lb 2oz. Still, a nice fish on a difficult day.

I only did one more gilthead trip in July, on the 22nd, but what a trip it turned out to be, on a blistering hot day in the midst of the heatwave.

I dug some lugworms easily enough but the fishing part of the day didn't get off to a great start when I found someone had planted a new mooring plumb in the middle of my favourite swim. There was nobody else fishing so I had my pick of other swims, and settled on one up-channel a way from where I normally fish.

I had a schoolie on the last of the ebb tide then the slack water was very quiet. The first hint of flow on the flood tide brought a good positive bite and a nice little gilt of about a pound and a half. Sadly it had swallowed the hook and was bleeding from the gills, so I kept it for eating. They are very nice eating though ...

As the tide picked up further a couple more schoolies followed. By now my lines were showing signs of bumping round with the tide - usually the chance of a gilt has gone by this stage but I thought I'd give it one more cast on each rod. Bass rod out, carp rod out and just putting it into the rest when the bass rod yanked over.

What followed was a fantastic fight with what was obviously a big gilt, but I'd chosen the swim well and despite several powerful runs it was never in much danger of finding a snag. Eventually the gilt tired and I steered it in round the clumps of bladderwrack in the margins - it was my second PB of the year, 5lb 9oz ...

I tried another cast with each rod but within moments the lines were swept round, festooned with green weed as the tide surged up the channel. The gilt really had been a last-gasp capture.

On the 27th I had another session on the airstrip strand to see if I could add to the thornback tally reported last time.

I started around lunchtime for the mid-afternoon low water, one line baited with bluey and the other with mackerel. I'm still using the mackerel I froze down last summer as I have plenty left where the winter spurdog fishing was written off by the 5km travel restriction. It's going past its best but fresh ones have been anything but plentiful so far this summer.

Fifty minutes before low water the bluey rod pulled hard over, and the tripod started to tip

forward. I grabbed the rod, wondering if it might be a big huss given the violence of the bite. The bottom-hugging fight was much more typically ray though, and soon I had a decent thornback flapping on the beach. It tipped the scales at just over 6lbs. I'd gathered a small audience of dog-walkers behind and one kindly took the photo for me.

Five minutes before low, I watched the tip of the mackerel rod unbend slowly then reverse direction and pull right over. After another tussle a second ray joined me on the beach, identical in weight to the first but with much prettier markings.

Half an hour up the flood tide, a more gentle bite on a bluey/mackerel cocktail produced another, much smaller, thornie then the inevitable airstrip LSD put in an appearence.

A few minutes later a massive drop-back bite dumped my line on the beach. I expect that was another ray but will never know as whatever it was had gone by the time I'd wound down to it. 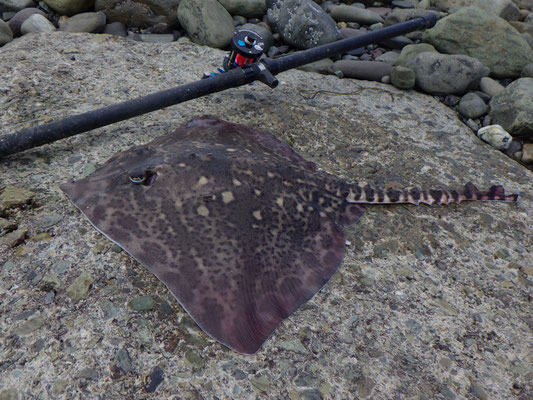 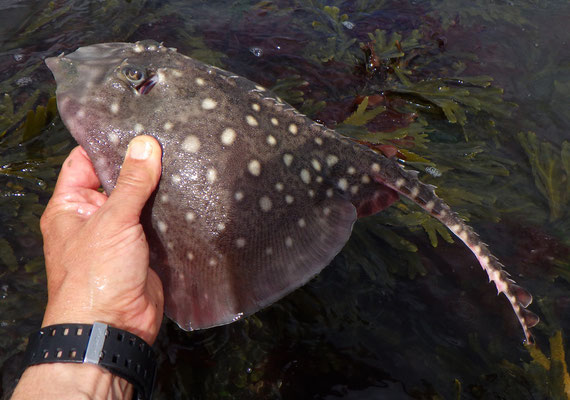 I've done just one more session on the rocks near home, when I took the bottom rods out on the 31st. I fished about four hours over the high water and had a couple of bullhuss of 8 - 9lbs, one first cast on a prawn/mackerel cocktail and one dead on high water on a mackerel head. The start of the ebb was very quiet, then last cast I had a rattly little bite that seemed to come to nothing. When I came to wind in, there was a bit of weight there. My immediate fear was that a tiny strap conger had been twisting up my rig for the last several minutes, but it turned out to be a rare daylight 3BR ... 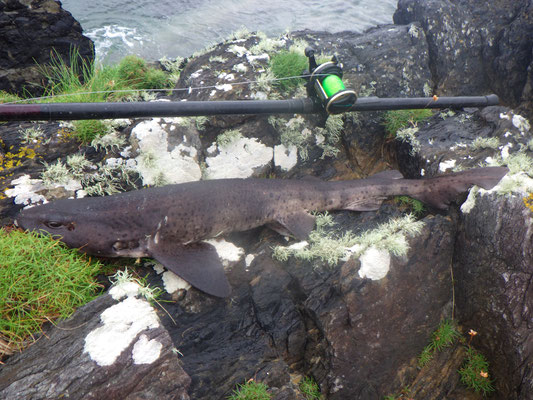 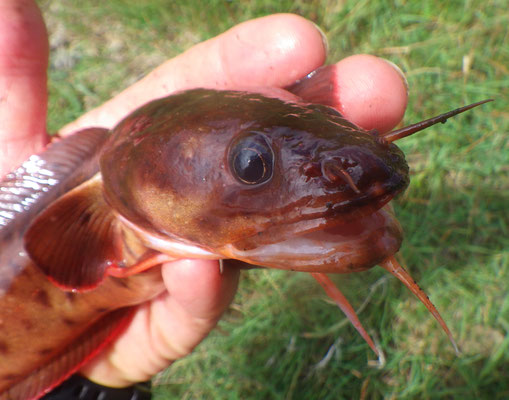 The summer is slipping by - I must get out on the rocks more over the next month. The main target will be pollack, but tomorrow Mike is coming over for some wrassing so I'm hoping that will make a nice start to August's fishing.