June, and into July

My exam work, though reduced, kept up a steady pace from mid-May and inevitably limited fishing opportunities to a few shortish sessions.

My mullet fishing has felt rather on the back-burner recently anyway. I somewhat lost the habit over the winter lockdown then was unenthused if not actually demotivated by some pretty dour sessions in the grim spring weather once travel restrictions were eased.

Over the last month or so I have had a few quick goes in the bay here just local. In fairness I've found mullet each time but only in small groups and very easily spooked in the clear, shallow water. A few opportunities came and went fleetingly as I missed the handful of hard-earned bites, a bit frustrating.

If the mullet in the bay were difficult, on one of the trips I found a shoal in the tidal lake that were much more obliging. Perhaps it was the few extra degrees on the water temperature, but they were immediately on to the bread I catapulted towards them and immediately giving me bites after I'd gently waded out.

After a couple more misses, I was in. It wasn't a large fish, less than 2lbs, but it was pristine and very welcome. A few minutes later I hooked into another that felt bigger, but it came off after a short run.

My only other mulleting success was from a short, almost drive-by, session on my low water rock mark in Bantry Bay. I only fished for about fifteen minutes and had two out, also no great shakes at 2:08 each but it was nice to see good numbers of mullet there and feeding and I'm looking forward to getting back.

I've kept an eye on Rosscarbery in passing on my way to and from gilthead fishing. It hasn't looked great to be honest, I've never seen such large amounts of green weed there in most of the popular swims.

My old friend Mike Buckley is over from UK and staying in his trailer home near Skibbereen having done his PCR tests and quarantine. On Thursday I met up with him gilt fishing then on the way back we stopped to fish for mullet at Rosscarbery. Mike found a small clear patch to fish on float down the west bank and I set up my leger rods next to the bridge arch.

My swim was reasonably clear of weed on the bottom but soon the new tide was pushing floating stuff left to right. I ended up fishing very close in to miss the worst of it and remarkably had incessant action on the tips for about ninety minutes up to high water. Most of it was tiny knocks and drop-backs that I persuaded myself probably were down to very small mullet, but occasionally there'd be a better yank that didn't connect. Then one did connect, after a fashion, and a decent mullet swirled and splashed on the surface then came off before I could pick the rod up. A few minutes later, as the tide was topping out and activity on the tips slowing down, one of the rods lunged over as another decent fish took. This one ran off about ten yards in a couple of spurts before it came off too!

It was getting late into the evening so I packed up and went down to Mike. He'd had mullet all round his bait throughout the session but only three proper bites and one fish about 2lbs.

The gilthead fishing has been difficult too. The crop of smaller fish I was getting in April and May seems to have moved on, leaving just the chance of the odd bigger specimen.

I fished a fortnight after I'd had my 4:14 on a very similar tide. There were several other anglers out including one casting from the road into the channel directly over the spot where I'd have been sat fishing in my favourite swim. I headed a good bit further down the channel to get away from all that, pleased to be away from the splashing leads but dubious about the closer-spaced moorings lower down there. I had one buoy close in which was an obvious hazard but I decided that with waders I'd be able to cope if a big gilt tried to go round it.

In the event I had a massive bite about an hour up the tide, The gilt ran diagonally left, well clear of the buoy that had registered as a problem and inexorably round behind one well down-channel and much nearer the far side than mine! It was a proper zoo-creature and there was just no stopping it, particularly once it saw the snag and turned on its turbocharger. Then followed three or four minutes with my line sawing back and forth across the mooring chain. I was waiting for the braid to part then surprisingly I seemed to be winning line back. The gilt must have been almost clear of the chain when it finally broke me, taking just the hook and maybe an inch of fluoro trace.

Three subsequent trips in a mix of less-than-ideal conditions were all blanks apart from odd school bass and the fourth, with Mike's company, was shaping up the same way. I'd only had a couple of schoolies and the weed was already started to drift up the channel when I struck into a persistent tapping bite. I'd thought it was probably a flounder but I found myself connected to an angry gilt! No problem with moorings this time but it did pick up a large clump of green weed during the fight. No worries though with Mike at hand to get the net under the gilt, weed and all. It was a touch over 3lbs...

This time last year I was doing reasonably well for thornback rays down on the airstrip strand near Bantry, so I've done a few trips down there to try to repeat that success.

The first was on an afternoon tide and although conditions seemed good no rays showed, and even the doggies were slower than usual with just a couple of them over the low water slack.

Next trip out, for a morning session, was also quiet with just a couple of bites over the low water again.

One of them was a big drop-back which is always a good sign, and after much heaving I duly landed a very decent thornback.

At 8lbs it was my PB in Ireland, though I have to say I have landed many more attractive thornies than this unusually dark one.

I went back to fish a similar tide a fortnight later. This was a much busier session with the doggies out in force and bites every cast. Between the LSDs I had a couple more thornbacks, not so big but respectable at about 4lbs and 6lbs.

All three rays were taken on bluey, as were most of last year's, I'm going to have to try sourcing some in Ireland. I've been bringing back a large poly-box of frozen baits from trips to UK but in another Brexit bonus this doesn't seem possible now, or at least risks confiscation at Rosslare port. There's a personal import allowance into the EU of 20kg of fish products but as far as I can see this only includes gutted fresh fish on ice or processed fish such as smoked or cured, not frozen fish of any kind.

I packed up this session running out of bait as the doggies reached plague proportions. They were even coming out two at a time on either end of my Pennel baits, though in the photo the lower of the brace is actually a small huss ... 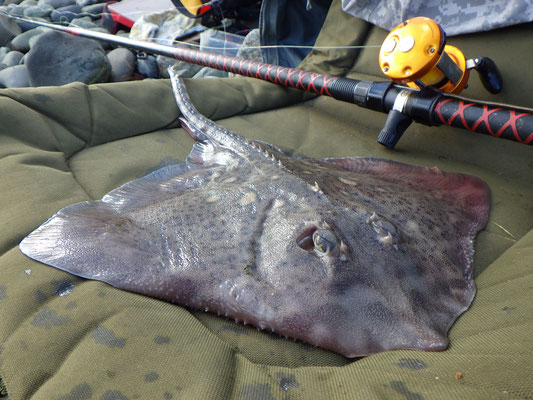 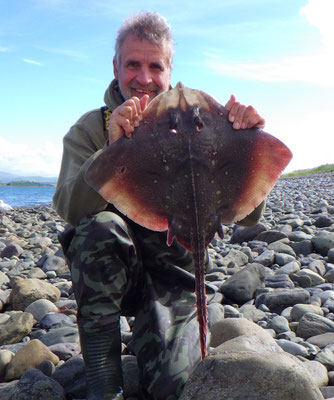 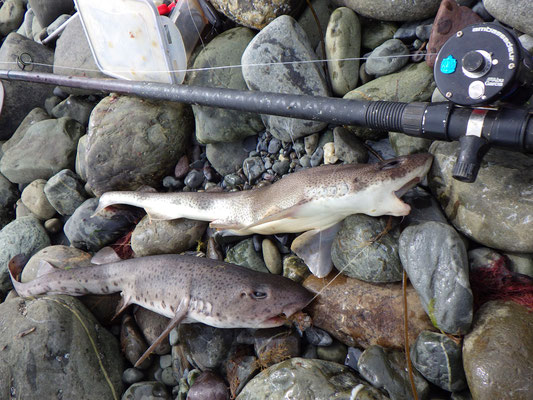 Speaking of huss, I had a decent one on my only venture out onto the rocks on Sheep's Head here. It was a bright but blustery day with a moderate west swell running into the bay so I chose one of the few east-facing marks facing back up the bay towards Durrus. 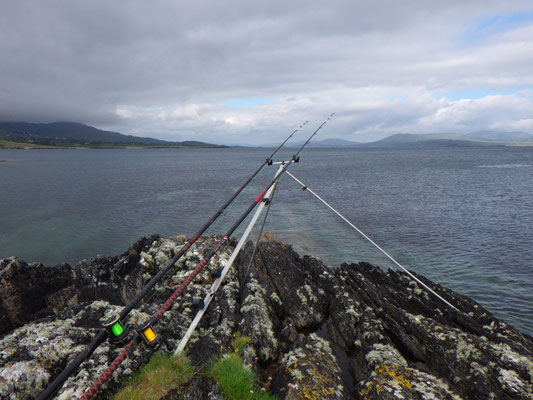 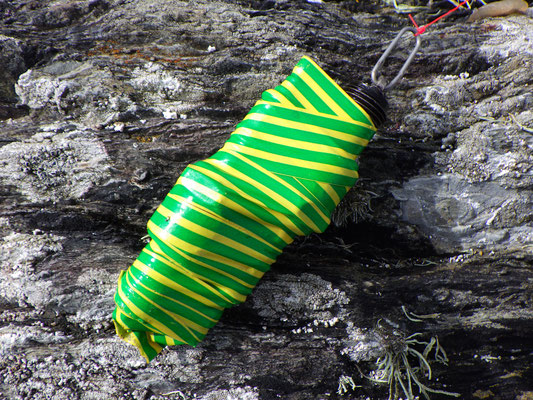 I'd been donated a box of old spark plugs to use as disposable weights. I've used these before for wrasse fishing but one seemed a bit light on the beach rods so I tried lashing two together with electrician's tape. The results were far from the most aerodynamic things I've ever cast into the ocean but they lobbed okay and held well enough not to drag into snags. In fact it's remarkable once something is designated "disposable" it becomes almost impossible to dispose of it ... I didn't lose a one! It's not the snaggiest mark I fish but I'd expect to lose one or two rigs with normal leads.

Anyway - I had plenty of bites but most of these were quick rattles I put down to small pollack having a go at the pop-up baits. A few more decisive bites turned out to be strap congers and an LSD then dead on high water I had a good run. The huss was weeded but eventually I got it in along with a large frond of kelp (and the disposable weight!) It was a very dark fish and long, though I doubt it quite made double figures as it was definitely on the skinny side ...