On the 5th I headed down to Rosscarbery on a mission to catch a mullet for May before moving on to other things. It was a fairly miserable day's weather, grey and blustery, spitting with rain on and off and none too warm. I had a good look round but couldn't see sign of mullet so I set up to fish the deeper water by the bridge arch.

After a couple of hours I hadn't had a bite or seen a mullet in that swim, but as the water had shallowed up on the ebbing tide I had started to see an odd one or two moving in front of the rocks to my right. I shuttled my kit over but had to endure another couple of biteless hours. Those mullet seemed not to be feeding then disappeared anyway.

I upped sticks and moved to my third swim of the day, down the west side of the pool, more to get out of the wind than in expectation of catching much.

In the event there were actually a few mullet there, whelming and bow-waving occasionally so at least quite active. The water was very shallow at the bottom of the tide but fortunately there was enough ripple to hide my baits from the gulls which would in turn have attracted the swans ...

After another hour of frustration my left hand tip yanked over without warning. The fish swam out strongly at first then came in very gradually, kiting to my left. The water close to the wall was barely deep enough to get my net under the fish, but eventually I scooped it out plus lettuce weed and mud. At 4lb 1oz it was my biggest mullet of the year so far, though not as big as I fancied it was when it first ploughed off.

On the 7th I headed further east for another try at the giltheads. Remarkably there was frost across the fields on the drive down and the air temperature actually hit 0 degC for several miles. It had clawed its way up to 3 degC by the time I arrived and yomped out across the muddy sand to dig some lug.

An hour later I was setting up to fish, not really knowing how the gilts might respond to such an unseasonally cold snap.

After two hours without a touch I was fearing the worst when one of the tips pulled over, and a lively scrap ensued with a gilt pushing 2lbs. A few minutes later I was in again with a slightly smaller one... 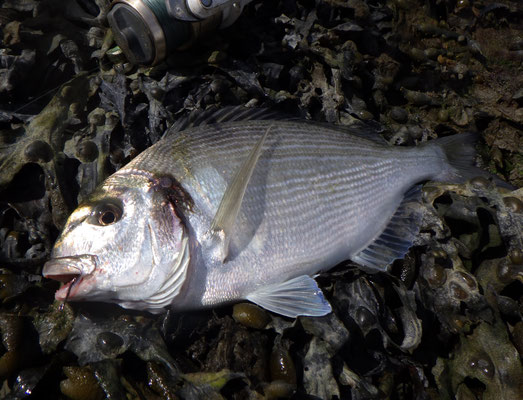 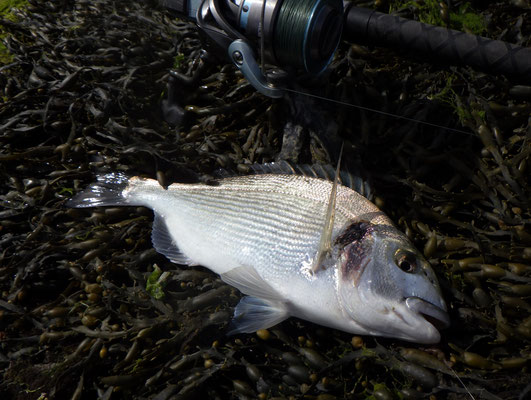 As the tide edged up I missed another good pull, probably a gilt, then a more gentle nodding bite produced a big flounder.

Looking at the photo of it here on my seat, awaiting unhooking surgery, I'm thinking I should have put it on the scales...

The session was brought to an end as the making tide, and the weed it was pushing up the channel, became all too much.

I'd kept my mullet kit in the car from the last session, and decided to have a quick go at Rosscarbery on the way home.

I headed straight for the swim where I'd caught last time, and cast the leger baits as far as I could towards the few fish I could see moving, a long way out in very shallow water.

In the event I didn't have to wait long for a bite, a good rattle on my right hand tip followed by slack line. I struck into the fish but it was only a small one less than 2lbs.

I couldn't get another take after that and packed up as the tide arrived into the pool and moved the fish on.

On 10th May the inter-county travel restriction was lifted. I headed up to County Kerry with the vague hope of a late spurdog in the back of my mind. Well, that didn't happen and the weather turned very wet for the morning then increasingly windy for the afternoon.

Around lunchtime I had a little flurry of LSD bites, landing three and missing a couple. Then a good pull-down on my left hand rod. The fish put up a stubborn resistance, especially the last few feet under the rod tip, then finally a big bullhuss broke surface ...

I thought it might go heavier than its 11lbs, but it wasn't packing a lot of weight on it compared to some individuals.

The bites dried up again but I didn't dry out much. I gave up mid-afternoon as the wind and swell became too problematic.

On the 13th I was back hunting gilts.

It was a warmer day than my last visit with just a touch of west breeze to ruffle the surface ... ideal conditions I supposed though I don't really know much about gilt fishing.

There were two guys fishing already on the ebb tide when I arrived, and another was fishing by the time I'd dug bait. I headed further down the channel than normal, leaving space for any late arrivals, as I really wanted the end peg so I'd have first grabs at any gilts coming up with the tide. In the event two more anglers arrived, but I was where I wanted to be.

A rattly bite dead on low water produced the first schoolie of the season, then it was all quiet for the first ninety minutes of the flood tide.

I'd wound in both my lines, moved my tripod back for the first time, baited up and cast out one line and was just finishing baiting up the other when the first rod pulled right over and braid was stripping from the spool. It was the lighter of my two rods - my old Daiwa carp rod - and it was everything I could do to turn the fish as it headed towards the moorings to my right. I did though manage to turn it, only for it to steam the other way towards the mooring to my left! It just had to be a big gilt ... it made several more runs but these gradually became less powerful and I became more confident I'd get the fish in. A minute or so later I was sliding it out onto the beach.

The angler next up from me came down for a look and he turned out to be my blog reader and now fellow Mullet Club member Jonny Butler. Many thanks to Jonny for taking the photo ...

The gilt weighed 4lb 14oz. I'm delighted with that but it's worth noting there are 6s and 7s from this area every year on the IFI specimen listings so hopefully there may be bigger yet to come. Not on this session though - I had just another pound-size gilt and a small flounder before the tide surged up the channel.

On the 15th I had my first covid jab and was quite unwell for a couple of days after. With my seasonal exam work kicking off on the 20th I was keen to have another go at the gilts before that so I drove down on the 18th. It wasn't the greatest idea to be honest, I was still decidedly below par and felt knackered by the time I'd dug the lug, and the "occasional showers" forecast turned out to be several prolonged downpours. I did get a gilt, another small one, but several other good bites all turned out to be small schoolies.

The international exams I mark have been badly depleted by covid restrictions in various countries across the world. It's not what I'd have wanted but at least I'll be able to take more days out for fishing than would normally be the case over the next few weeks.