There's not a lot to report here. The level 5 lockdown with its 5km restriction on non-essential journeys has ground on and on, and is continuing as I write. I'm lucky I know to have some fishing available within 5km but it rarely shines in the early months of the year and I've found it a bit demotivating not being able to travel south for the winter mullet or north for the spurdogs that would have featured heavily in my plans. The weather has been very up and down and all I've managed is a few night sessions on the pier during the less unpleasant interludes.

First was on 21st January. The water was quite coloured after a rough spell which in the past has been the precursor of some good huss sport.

I had plenty of rattling bites on small to medium fish baits but they proved difficult to hit.  The half dozen I connected with all turned out to be really small LSDs - cute in their own way but not very exciting.

Towards the end of the session I had a good strong run on a mackerel head bait, then a lively tussle with the only huss of the night. It was a nice fish I'd say just into double figures.

I was next out on 6th February.

Again the smaller baits were getting a lot of attention, this time mainly from small pout.

I added a couple of badly-hooked ones to the bait supply, but neither these nor mackerel heads received much interest.

Instead I had to rely on the smaller baits to produce a smattering of better fish. There was  nothing very inspirational though, just a three bearded rockling and a couple of very modest strap congers. 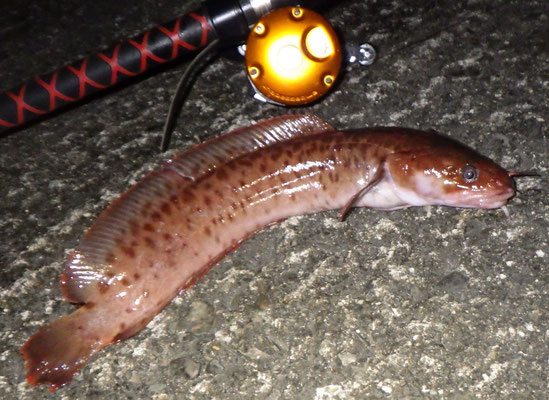 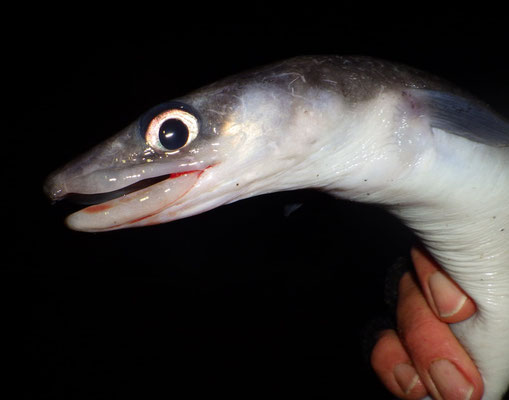 About half-past midnight a car came down the access lane, An Garda Siochána had arrived to check me out! I can't imagine they'd routinely be touring piers in the middle of nowhere in the early hours, so I'm guessing someone had seen my light moving about from further up the bay and reported me for smuggling or holding an illegal party ... we had a friendly enough chat about the fishing then inevitably they asked where I'd travelled from. Fair enough question with my English accent and Kerry-registered car, but the pier is comfortably in my 5km so no problem.

The gardai had just gone when I had a stuttering run on a mackerel head. A mediocre huss about 6 - 7lbs shook the hook out at the edge for an appropriate end to an indifferent session.

I was back on the 21st February on the tail end of a very cold snap that had seen two snowfalls just inland of us around Durrus. The water was cold and clear and the session turned out very dour indeed.

I had no action at all on the big baits, The scratching rig turned in a small pollack, a tiny strap conger and another three bearded rockling.

The 3BRs are pretty fish but already losing their novelty value - that's the third this winter, or maybe the same one three times, who knows?

Between times I've been doing a bit of rig-building for better days ahead.

I think most of fishing is about the right time at the right place with the right bait so I don't often write about tackle. Just occasionally though ...

I've probably come late to the Gemini Splashdown bait clip party, but what a great piece of design!

For years and years I've used Breakaway Impact Shields on my clipped-down rigs. They've been great, but they're fiddly to set up. They rely on sliding up the trace a bit on impact (to a stop) to release the bait. If the rig body line is too thick or the rubber tube holding the clip in place is too long, they don't slide enough and the bait may not release. If the rig body is too thin or the rubber tube too short, they may slide and release the bait early in flight. No such issues with the Splashdown, just a foolproof release on impact every time. The slot in the metal blade part for the hook is happily just large enough to take the barb on a 4/0 Viking or Manta Extra which are the biggest I use on clipped rigs. I don't bother with clips for baits like mackerel heads on bigger hooks just lobbed off the rocks or pier.

I'm not a massive fan of attractor beads or other trace clutter but by many accounts spurdogs can respond well to luminous attractors so I thought I'd give it a go. I found these on moonglow.co.uk - they are basically just a rubbery silicone cylinder impregnated with the glow chemical. There's no hole, I just speared them onto the wire biting piece I use for spurs before crimping on the hook, but they could be added retrospectively onto the hook and slid up over the eye onto the trace. They are supposed to glow best when "charged" by a UV torch, but I haven't organised that yet and they glow pretty well after a few seconds' blast with a normal white LED torch. 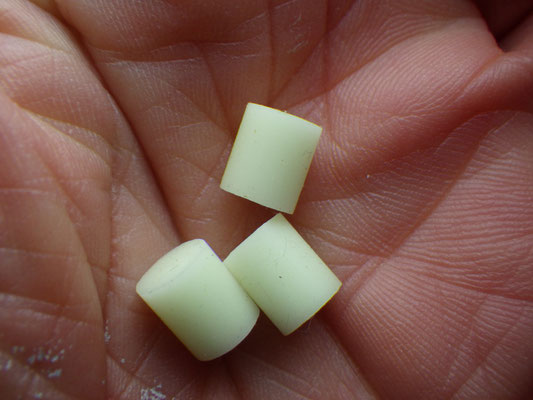 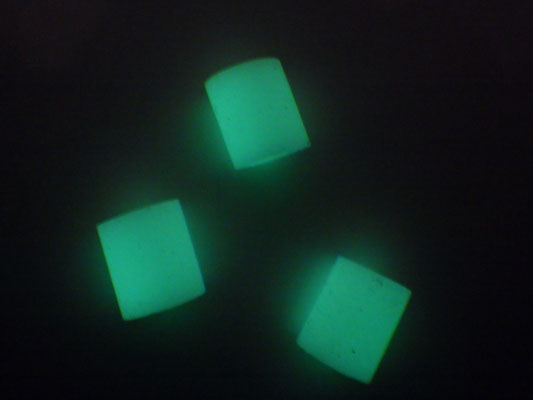 I first used them on the spur rigs I used on my Christmas Eve trip, and I caught. I'll never know of course if the glow beads made any difference, but I feel there's no going back now ...

Late February and into March we had a dry spell with predominantly east winds that kept down the worst of the Atlantic swells. Instead of getting out on the rocks I was diverted into painting a neighbour's house ... well it made a change!

We finished the painting today just ahead of rain this evening and what looks a wet and windy spell over the next few days. As soon as that abates I'll get out on the rocks for a couple of sessions and fingers crossed we'll be let out into wider County Cork from 5th April.