December Update and Into the New Year

I headed down to Rosscarbery again on 7th December. It was a grey, gloomy day with occasional rain showers, so I set up under the brolly on the grass. Although it was mild there were evidently far fewer mullet present than last week; I'd see a bit of surface activity from time to time but bites were hard to come by. I had a couple of takes mid-afternoon and landed both fish, 2lb-class thicklips.

A wet and windy spell followed, and my next trip out was on the 12th for a night session on the pier just local on Sheep's Head. It's a Jekyll and Hyde sort of venue but tonight it was on form; colour in the water seems to help the bottom fishing and there was plenty of colour at the moment.

First fish out was a three bearded rockling that took lugworm on a scratching rig ...

3BRs are such cool-looking fish, in complete contrast to the greasy little shore rockling we used to catch in Hampshire which were universally unpopular, probably because they fed best when the water was at its coldest in January and February and they were often a sign you most likely wouldn't catch anything better.

The lugworms failed to produce anything else except a string of tiny poor cod.

Meanwhile I had out fish baits on two other rods.

Prawn/mackerel cocktail was getting bites on one rod - a bigger poor cod, dogfish and a strap conger resulted.

I was fishing mackerel heads a bit closer in on the other, and getting plenty of action from huss, including one particularly paunchy individual. I'd think she was around 11 - 12lbs but I didn't weigh her as I thought she must be on the verge of shedding her egg pouches and wanted to get her back into the water quickly. I lost count of the others, I think five or six with more conventional body shapes weighing up to 8 - 9 lbs. 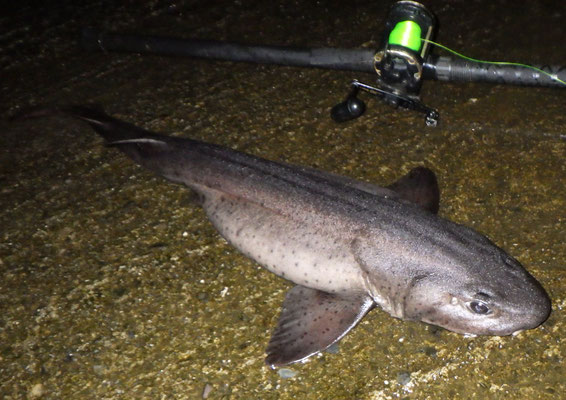 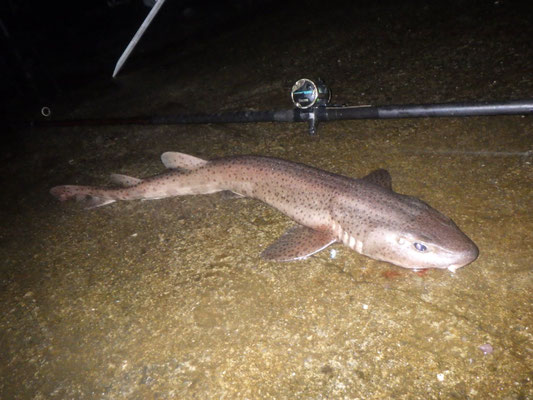 The session was a first outing for a new Fenix headlamp.

My previous headlamp, an early model Petzl Duo, had suddenly stopped working. I think it had a break in the cable where it entered the lamp unit from the separate battery pack, but after struggling for a while I decided the thing clearly wasn't designed to take apart to investigate! I dragged the reserve out of the loft, an old Speleo Anglers Light with LED conversion, but understandably after not using it for at least a decade the NiCd battery didn't want to hold any charge so I've scrapped that too. It weighed a ton anyway!

Early days for the Fenix but I'm pleased so far. The middle setting on the flood beam was all I needed on the pier but it has two other flood settings, and four settings from low to turbo on the spot beam.

Next trip out was back to Rosscarbery on the 19th, on what looked like being the best day of the continuing miserable spell. Even so, there was a stiff westerly wind so I opted for the shelter of the west bank. The day was punctuated by some vicious squally showers and just a very few sunny spells.

I could see mullet moving in the shallow water on and off throughout the session, mostly at and beyond the limit of my casting range and apparently not feeding well. I kept welting the leger baits out, and eventually had a flurry of bites early afternoon. I missed a couple and landed a brace of mullet, both 3lb 12oz ... 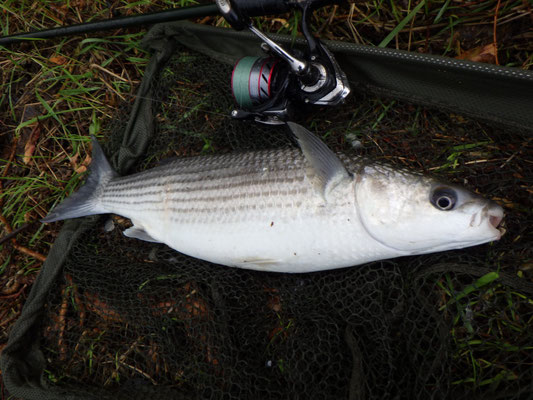 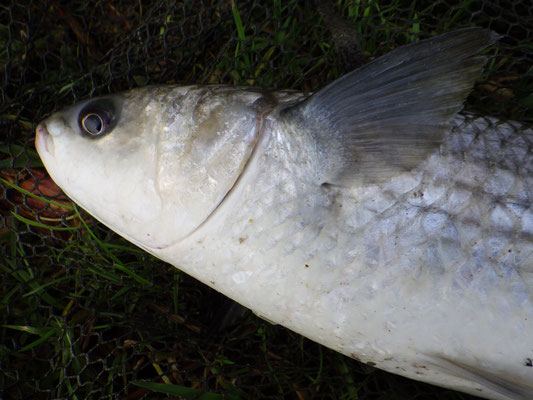 The national travel restrictions had been lifted from the 18th for Christmas, the relaxation originally intended to last till 6th January. Everyone was expecting the in-county restriction to be reintroduced then, so I was keen to make use of the break to get up to Kerry to try for an early spurdog. The better tides were in the week after Christmas, so I planned on that basis. Then, with new covid infections already rocketing, the in-county restriction was announced as resuming from midnight on St Stephen's Day!

A hurried change of plans saw me heading up to Kerry to fish a less-than-ideal tide on Christmas Eve...

One of my regular marks looked favourite with the steep hill behind providing shelter from the northerly wind. There was light rain on and off through the morning, then the day dried up. It was a small tide but at least the water was a decent colour, a sort of cloudy grey and not the peaty brown I feared after torrential rain yesterday.

High water passed about 11.30am; the only thing that seemed to be feeding on my baits were starfish, I had three or four of these guys.

Lunchtime passed. I had a robin of all things for company down on the rocks, a cheeky little chap who was nearly hand-tame. I fed him some crumbs left over from my sandwiches and discovered he really liked squid tentacles which he sucked in like they were worms.

The afternoon wore on. A great northern diver was working close in along the rocks. We get them in winter on Sheep's Head too but I've not seen one this close, handsome bird. He seemed to be having good luck with what looked like small wrasse and gobies. Meanwhile, I still couldn't get a bite.

By 2.30pm the wind had turned to an easterly breeze and the ebb tide was bringing brown water down the bay. It all looked increasingly hopeless and I decided to knock off at 3.00pm.

At 2.50pm my left-hand rod pulled down firmly, I'd been fishing it a bit closer in than the other for a while in case it might pick up a conger or huss along the rock edge. The fish came up stubbornly then spat out the bait as my leader knot broke surface, just before I could see what it was through the murky water. My guess would be that it was a huss, though subsequent events suggest maybe not.

While I was baiting up that rod again, my other one gave a couple of rattles. Nothing seemed to develop so I left the squid/mackerel cocktail bait out there fishing on the muddy bottom.

A few minutes later it pulled down more decisively. I grabbed the rod, felt the weight of the fish and then it was gone. I assumed it had come unhooked but no, the 80lb mono trace had been bitten clean off just above the short wire biting piece I tie in! Huss will wear through a mono trace for sure but they don't really have the dentition to bite straight through, so I was immediately thinking the culprit may have been a spur. They don't normally deep-hook so my suspicion was it had managed to pick up the trace above the bait.

I tied on a new rig and got another bait out ASAP and almost immediately it was taken. This time I hooked up properly and played in a lively but clearly not very weighty fish ... it was indeed a spur, though only a small male about 4 - 5lbs.

I cast out again hopeful of more instant action, but in the event it was nearly 30 minutes before I had a more gentle nodding bite on the same rod. This was clearly a better fish so I hoped it stayed on. I scrambled over the slippery rocks to the edge to slide out a nice spur, this one a female about 8lbs...

I was elated with that. The whole trip was a long-shot forced by the expectation of being restricted (at best) to County Cork all through the spring. I think after scoring in February and now in December, the traditional March/April/May spur season is a bit misunderstood ... perhaps they are there all winter just nobody is trying for them. I ended up staying right into the dusk, but no further action.

I was half-minded to dash up to Kerry again for St Stephen's Day, but in the event Storm Bella put paid to that.

After the storm we have had a protracted period of bitter north winds that I really didn't fancy at all till they'd eased off a good bit. A 5km travel restriction was reimposed from New Year's Eve with the covid crisis still escalating, so a planned mullet trip to Rosscarbery on New Year's Day fell by the wayside. In fact, all my mullet fishing has fallen by the wayside for the forseeable future so I don't feel so bad about dipping out in November now.

My first trip of 2021 was on 3rd January, to a rock mark on the Bantry Bay side of the peninsula on the fringe of my 5km zone. The north wind had died down to next-to-nothing and it was a gloriously sunny day, it's not often you'll see the Atlantic like this in wintertime ...

The fishing, it has to be said, didn't really live up to the occasion.

Smaller permutations of squid, mackerel and prawn fished well out produced a few knocks and rattles, but I only landed a smattering of LSDs.

Meanwhile, mackerel head baits fished closer in remained untouched till a nodding bite late on that I missed then an identical bite next cast which I hit. It hadn't been much of a bite, but it was a good weighty fish that pulled hard in the clear water.

Much as expected, a big bull huss broke surface. I scrambled down the rocks to lift it out by the trace, and estimated it at 12lbs.