Well, my run of consecutive months with mullet came to an end (at 32) with the 5km travel restriction throughout November. I can't even say it went out with a bang; more of a fizzle ...

I thought I was in with a shout at the start of the month. On the 1st I went for a walk along the brackish lake that had turned up trumps during the spring lockdown. It's never a prolific venue but I spooked a couple of mullet out of the margins so I was hopeful of some action when I went back with my float rod on the 2nd.

I waded out in a favourite area, and ran through a float on the drift caused by the gentle SW breeze, loose-feeding a little mashed bread every trot. After about ten minutes the ripple was broken by a swirl under some floating scraps of bread. Whether it was a mullet or one of the resident trout I don't know, the fish didn't show again and I didn't get a bite. I gave up after a couple of hours.

I was back next day in a flat calm, but didn't see a sign of mullet aside from a small shoal of fingerling fish in the margins.

I decided I'd leave it a few days till the lake had had a top-up on the next set of springs, but instead the weather took a turn for the worse with one of the wettest and windiest spells since we moved over here.

By the time we had a couple of better days we were heading into the last week of November, and winter seemed to have set in. The leaves were off the trees and the lake seemed devoid of life. The fingerling mullet had gone; even the resident swans had disappeared. It didn't seem worth getting the mullet rods out either at the lake or indeed off the pier, the water in the bay being unusually clouded from all the swells and rain.

I decided to call time on my mullet run ... a decision not exactly helped when Jason posted photos on Facebook of the six mullet he'd caught in the shelter of the estuary near his home at Clonakilty the very same day! I was tempted ... but stuck to the Level 5 rules.

Instead I ventured out onto the pier one evening with the big rods. I was hoping for a huss but in the event managed only dogfish and poor cod. I had one tentative take on a mackerel head, but my leader parted when I tightened into the fish, the last few inches shredded - I'm guessing it was a conger that had just backed off with the bait under a sharp rock ledge.

It wasn't much of a session but appetite whetted I headed out onto the rocks on the 27th ...

I made for a new spot along the rocks from where I've fished before. I've got to say, it is one of the comfiest marks I've fished on Sheep's Head, a nice flat platform and plenty of room behind for casting ... so it's a pity it seems to be horrendously snaggy under the water!

I lost more sets of gear than I care to think about, had plenty of bites, landed a few LSDs and a strap conger, missed a couple of good runs and managed one huss. At least it was a nice one just into double-figures. I should have done better really.

And so into December, and the 5km restriction lifted. I was a bit deflated about the mullet run ending before its time, but still there's no point moping about it so on the 2nd I was down to Rosscarbery.

It was calm when I arrived mid-morning, and mullet were topping all over the pool, just to remind me what might have been.

I set up on the grass and was soon getting knocks on the tips, I think a mixture of line bites and half-hearted interest in the baits with the water on the chilly side. I tried striking a few of the better pulls to no avail and as is often the way in winter, it was a case of waiting for the mullet to start feeding. It was into the early afternoon before I had a proper take.

I duly landed a feisty little 2:08 that I'd hooked close in, followed by a 3:02 taken at range - these being typical of the size of the winter fish at Ross. A while later I played in another one hooked well out only to have it throw the hook at the edge, and finished with a bit better fish of 3:14. It was a nice little session to get started again with the mullet ... 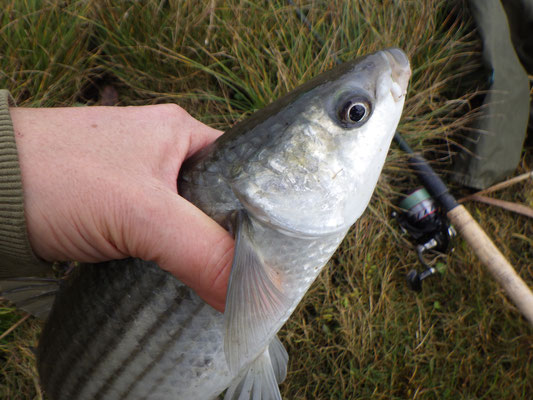 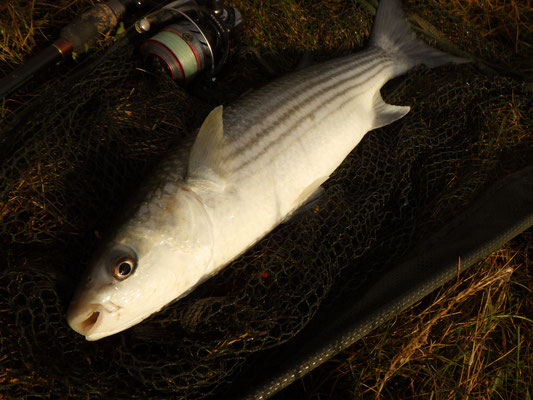 I'll finish by wishing my readers on here a Merry Christmas, and a better year ahead in 2021.