My October fishing started on the 2nd at Rosscarbery.

I arrived late morning and had a good look round. I couldn't find many mullet anywhere, so in the end I went for the default option of the grass by the N71 where I could get the brolly up as shelter from the chilly north breeze and the showers that were threatening. It's also nicer for Fern collie than fishing off the side of the road and where I'd be more socially-distanced from people passing by!

I was spotting occasional mullet whelming, mostly further out, but it was lunchtime before I had a take on one of the leger rods. The mullet ran out powerfully then took me right along the grass to the right to land it. I was a bit surprised it was smaller than I thought and only went 3:15. It was a decent enough start though.

That fish might have marked the beginning of a feeding spell, but no such luck and it actually turned into a very slow afternoon.

Towards evening the new tide started pushing into the pool - it was a spring and I knew it would soon be flooding over the grass so I'd have to up camp and either set up to fish from the wall or pack up ... and packing up seemed favourite given how little action I'd seen.

With the deepening water I dropped one of the baits in close, just in case something might come mooching along the fringe of the rocks, and it was this rod that lunged over just as I was starting to gather my kit together. By contrast to the earlier fight, this one was fairly low-key with the mullet just chugging left and right in front of me and gradually coming closer. I suspected it had some weight to it but this time I was surprised how big it looked in the net. It was a bit of a lump - but I'd just missed out on my third "six" of the year, 5lb 15oz ...

The photo there has been Photoshopped a bit. The evening sun was so low in the sky I managed to get the shadow of the camera plumb-centre on the flank of the fish without realising! Three of my friends had a go at it after I put an appeal out on Facebook, thanks Laurence and Alan for trying and this one is marginally the best of the bunch by Mark Bennett, thanks Mark.

On the 7th Sylvi and I were supposed to go on a short break up to Portmagee in Co. Kerry, but at midnight on the 6th we were moved from covid level 2 to level 3 and restricted to Co. Cork! I wasn't expecting to do a lot of fishing but I was looking forward to trying a couple of new marks and scouting out some others, so it was rather disappointing ... we've carried the deposit over to an as yet unspecified future date.

Instead of our Kerry trip we did a couple of nice days out at the Gougane Barra and on Sherkin Island, then on the 11th I was back to fish at Rosscarbery

It was a small tide and a millpond-calm day. I could see a lot of mullet moving and set up right by the bridge arch. From there a long cast would put my baits out into the shallow water at the tail of the flow out of the lagoon, which was where the mullet activity seemed most concentrated.

My first few casts passed without a bite. I was winding in one line when I thought I'd snagged into a clump of weed or a small branch, until after dragging it in a few feet it came to life!

At first I assumed I'd foul-hooked a mullet but it didn't really seem lively enough for that. The fish kited off to the left as it came close to the bank, and by then I'd twigged what it was.

I netted a flounder, quite a big one but on the lean side for this time of year. It wasn't foul-hooked though, the hook was well inside its mouth. There's no way a soggy piece of breadcrust would have stayed on at the speed I was winding, so I assume the flounder made a grab for the empty hook as it shot by its nose.

Soon after I started getting mullet bites. I lost one fish and landed a couple ... 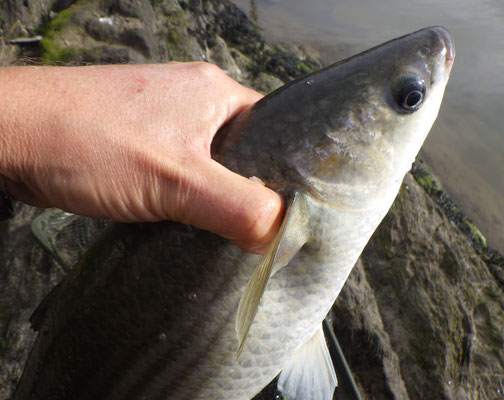 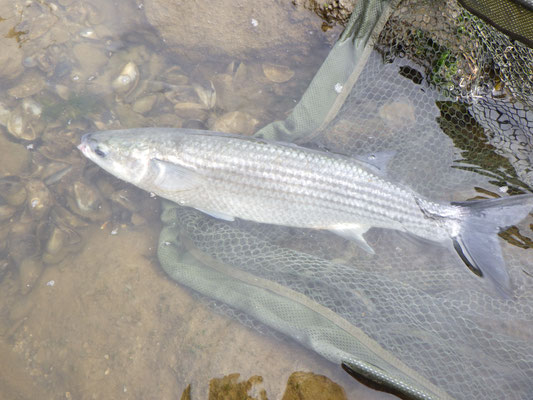 ... in a short feeding spell that coincided with my own lunch time. Once I'd finished my sandwiches and put the coffee flask away, everything went quiet on the mullet front too.

Later on in the afternoon I started seeing the odd mullet flanking right in close to the rocks in front of the bridge arch. I set up my float rod and made my way down, and had a couple of more fish out from there ... 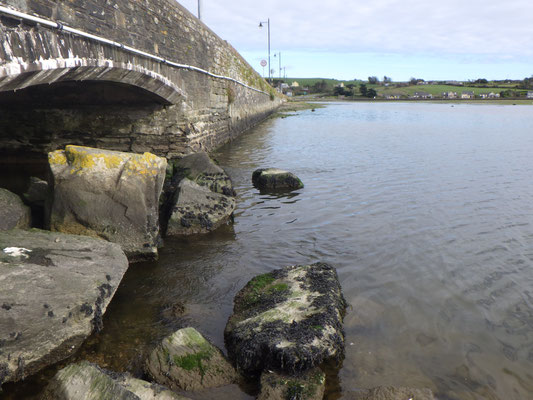 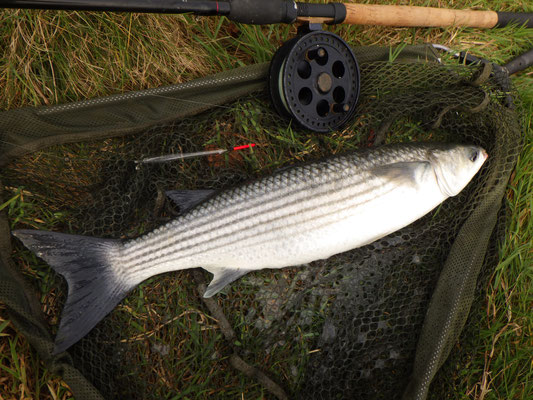 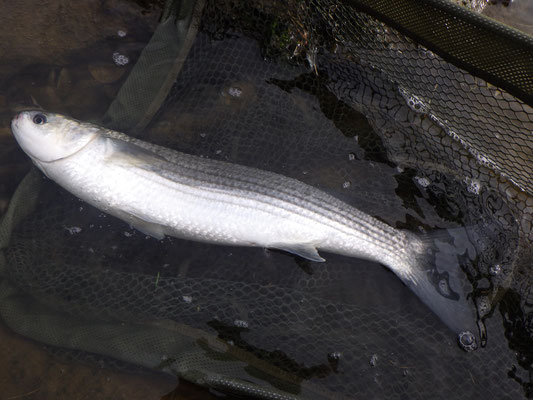 There'd definitely been a changing of the guard at Rosscarbery though, with the big 4s and 5s that had predominated over recent weeks replaced by the smaller stamp of fish that typify the winter fishing. The biggest of the day was the first at 4:03, the others were two and low three pounders.

My sense that the seasons were changing was reinforced by a visit to my mullet rock mark in Bantry Bay ... not a mullet seen and my first blank there all year, save a solitary mackerel on my first cast.

On the 14th I broke out the big rods and headed down near Mizen Head.

I'd fished the mark before soon after we'd moved to Ireland but at an unpromising time of year in early spring. I hadn't done very well but unlike the Sheep's Head marks it seemed like I was fishing out onto sand and I'd long meant to go back for a try to see what different species that might bring.

The day didn't get off to a great start when I broke my bait fork when I stopped en route to dig. I'd intended using mainly worm baits so I started with an unpromising bait supply of just sixteen lugworms, one pack of frozen sandeels and a frozen mackerel. At least I soon supplemented that with a fresh mackerel which grabbed a strip of the frozen one while I was winding in.

There was an east wind blowing off my back, the sun was probably too bright and in truth it wasn't a brilliant session. I missed quite a lot of timid little bites on the worm baits but along with a small pollack I did score my first dab and my first codling in Ireland. I've got to say I need to work the size up a bit though! 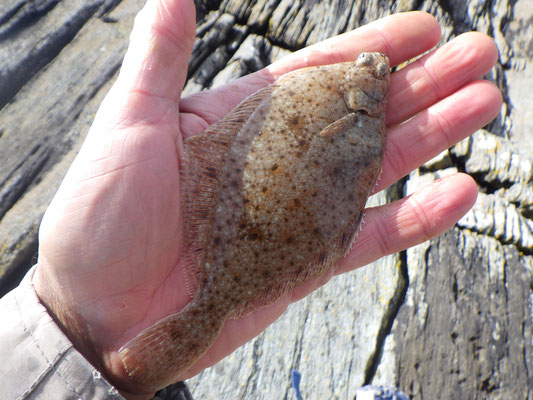 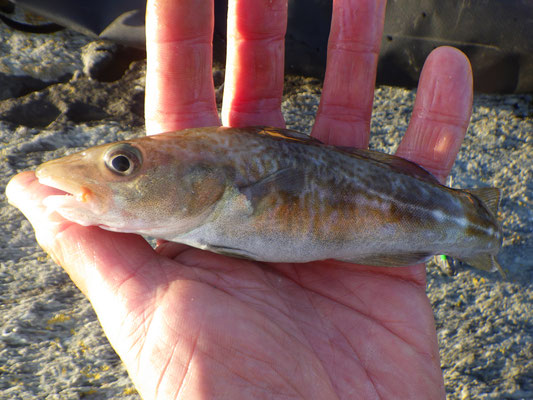 The east wind was still blowing, well howling really, when I was back at Rosscarbery on the 16th. I was expecting it to be bleak but I wanted to give it a last go before my exam work kicked off for the autumn session and, as seemed likely, even more stringent covid restrictions were imposed.

I hunkered down under the brolly and kept the leger baits going out, and a couple more mullet hung themselves on, just either side of 4lbs ... 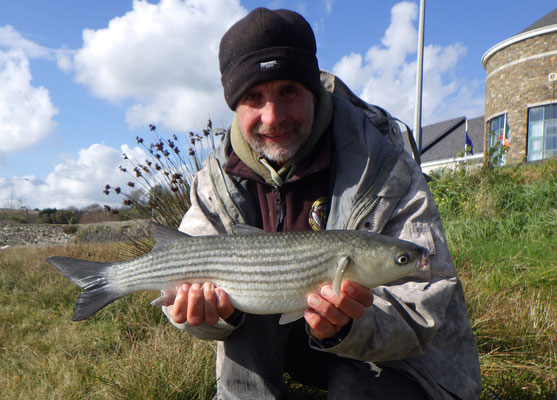 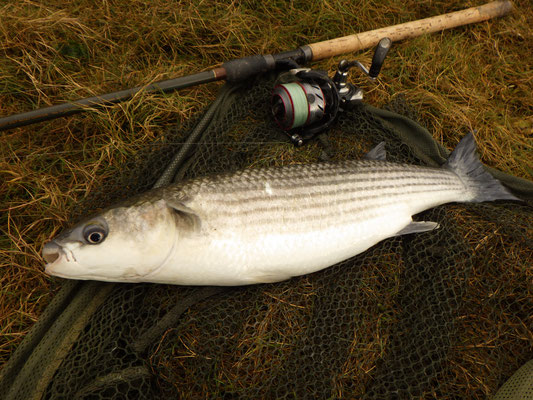 From the 22nd the whole of Ireland has been placed on covid level 5, with a 5km restriction on non-essential travel. We are allowed to fish just local but I haven't been out since as I've decided to push on with my work so I can take a few days out in November to try to keep my monthly mullet run going, currently 32 months since March 2018.

A November mullet is a long shot to be fair, with not much chance at this time of year along the shallow rocky shore near the village here. The good news is that the morning of the 16th, Sylvi spotted some decent mullet in the tidal lake, the first either of us had noticed since I was fishing there in the lockdown in April and May. The bad news is they were hanging around the mouth of the channel down to the beach, probably waiting for a tide big enough to get out ... and with still more than a fortnight till November. Even worse news, the weather since has been shocking - cold, wet, windy and some massive swells running into the bay, up to 10m high in one spell. So there's not much to have encouraged the mullet to have lingered on at the end of their season here, but I'll give it a try in the tidal lake, and failing that in the deep water round the pier. I'm not confident but we'll see how it goes.