It's been a funny few weeks. It took a few days to get properly mobile again after crocking my knee on the rocks, then August became something of an exercise in weather-dodging. First we had thunderstorms that caused flash flooding around West Cork - Rosscarbery was hit twice in the space of 48 hours - and the bays both sides of Sheep's Head turned brown with peaty water pouring in off the hills. Then later in the month, two major storm events - Ellen and Francis - kept things stirred up and brought more floods including wrecking the middle of Bantry town.

Early in the month I did a couple of sessions on the trigger fish mark, but there was no sign of a trigger.

The many bites all proved to be wrasse, a few modest ballans but mostly pretty little corkwings.

The weather hasn't really settled down long enough since to warrant another go but hopefully we'll get a calm spell in September..

Another failure has been the gilthead fishing. I've had a few goes across the month when conditions have seemed okay, but drawn a complete blank on the gilts. My Facebook friend Jason has had a couple of real crackers this month but it's very hit and miss this time of year and ... I've missed. The bycatch has been several schoolie bass but only one that was sizeable, just barely. I was debating whether I could reasonably whack it to take home for dinner when the IFI inspector's van pulled up on the road behind me. I decided I could do without the discussion and put it back!

I also had one session on the Airstrip Strand but that was at the peak of the brown water and I didn't get a sniff on the bottom baits. Surprisingly there was some surface activity - a nice sea trout on the go, a couple of decent mullet bow-waved by close in, and against the odds a couple of mackerel emerged from the sepia water on my mackerel feathers to supplement my bait supply.

The mackerel fishing has actually been spectacular every time the water's been reasonably clear, with big shoals in both Dunmanus and Bantry Bays and some numbers of porpoises, dolphins and minke whales followed them in. I caught my first glimpse of a fin whale in Bantry Bay and there have been humpbacks in close too on the right day.

I've had a few sessions catching mackerel for eating and to top up the bait freezer. There have been a few big launce mixed in with the mackerel too, also a welcome addition to bait stocks. 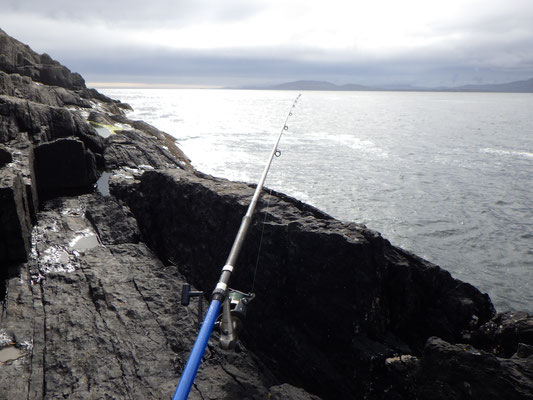 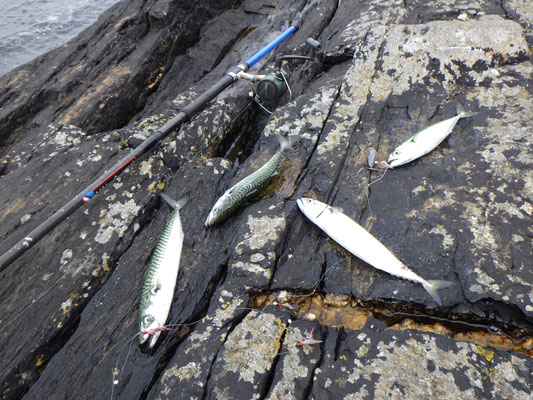 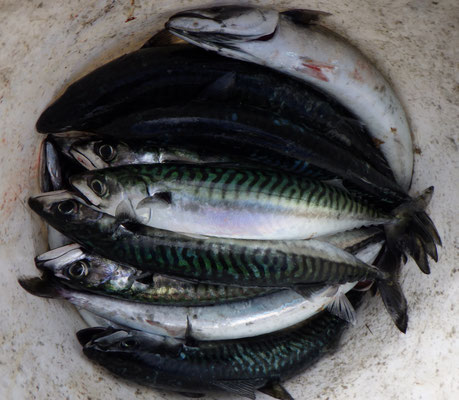 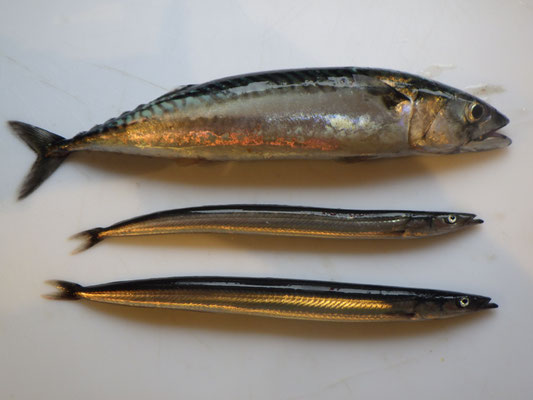 It's been strange to have company on the rocks some days. It's been an unusually busy tourist season with most Irish people taking staycations this year, and quite a few holiday anglers have been having a go for the mackerel. I've also met some guys who've been affable enough but I'd say must be fishing commercially from the numbers they are carrying off. Not really what I'd choose to see though I doubt it does much to dent the stocks in the grand scheme of things.

Towards the end of the month I fished a night session from the pier just local.

It was desperately slow on the bottom baits with just one small poor cod on a scratching rig and one non-commital pull on a mackerel head bait that came to nothing.

I was surprised though that a new solar power LED street lamp has been installed on the pier, given it's out in the middle of nowhere and I've never seen anyone else using it at night.

There was a good bit of fishy activity under the light. Some fish were obviously pollack from their bronze colour, and there were a lot that turned out to be small scad - I didn't have any feathers with me but had a couple just jigging a two-hook paternoster baited with slivers of mackerel. Occasionally I'd see a bigger, pale fish ghost through a bit deeper, I don't know if larger scad or maybe mullet. Dead on high tide the water suddenly turned black as a shoal of mackerel moved in. I foul-hooked one in the tail and in a few seconds they were gone again into the night.

Anyway, I had some fresh bait to use next morning and headed out on the rocks not far from the pier, on the lee side of a headland as Storm Francis was still winding down. It wasn't a hectic session but I had a little burst of activity just before HW when one huss let go after a few yards then I had another (or possibly the same one) a few minutes later. It weighed dead on 10lbs and had taken a mackerel/scad cocktail...

I haven't done much pollack fishing, just a couple of short trips on the lee shore where I had the huss when the storms were limiting other options. I had a lot of small fish, lost a couple of clonkers that I couldn't keep up out of the kelp, and kept just a couple about 3lbs. They are really too tasty for their own good ... 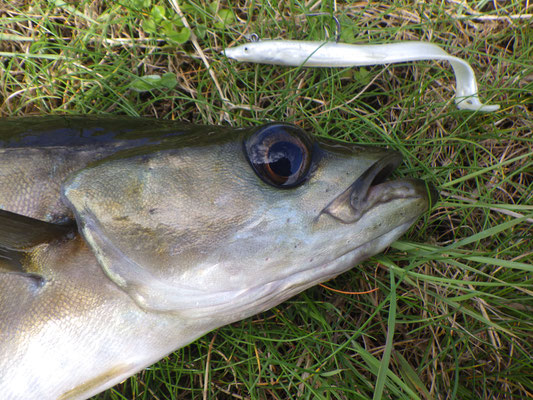 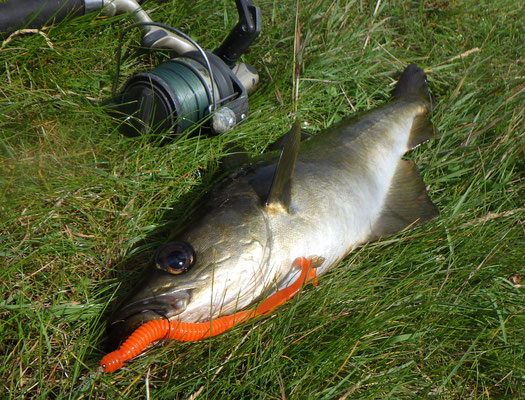 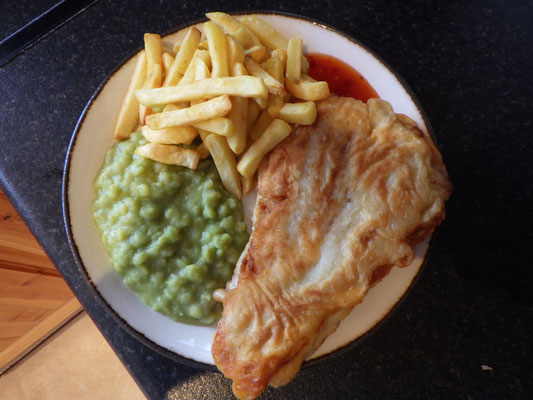 Early in the month while my knee was still iffy I did a couple of short trips down onto my low-water rock mark in Bantry Bay. It's only a short hop (!) from the car and although it looks rugged I have a fairly flat spot to fish from.

There were plenty of mullet about giving plenty of bites, and I soon had my August mullet in the net, in fact six of them across the two trips, mostly on fish baits. As usual these weren't the biggest of fish, generally 2 - 3lbs size, but they still give the centrepin a good workout. 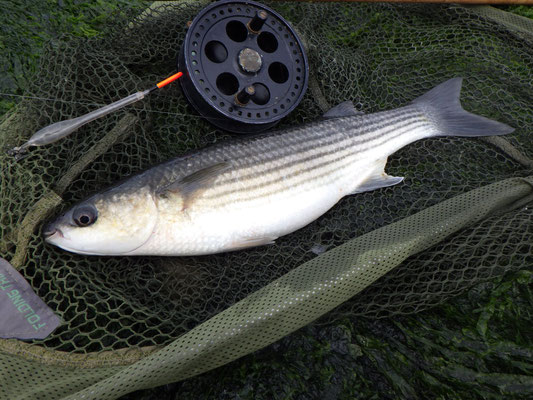 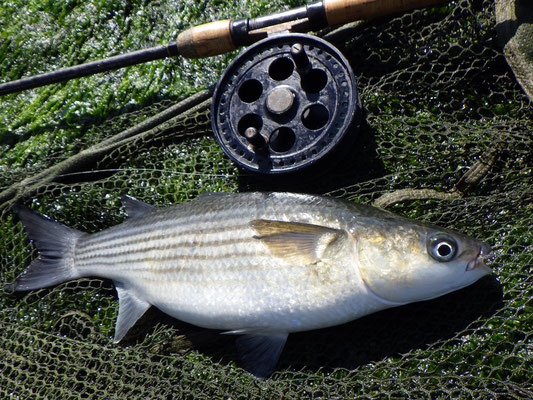 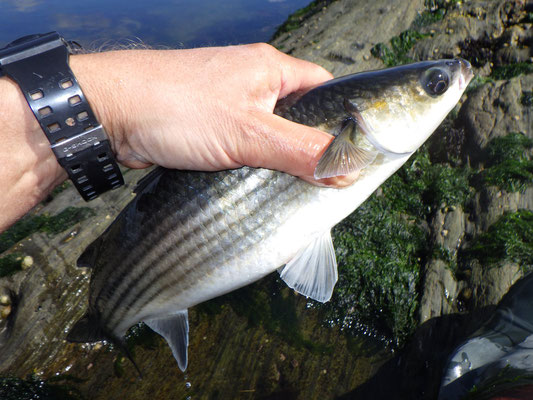 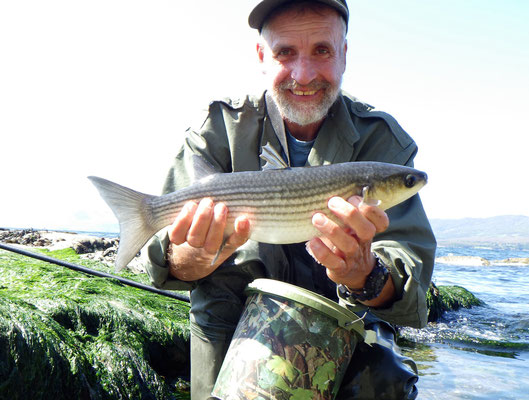 Later in the month I headed back, to be greeted by an extraordinary sight - the normally gin clear water had turned green and turbid.

We'd been seeing patches of what looked like yellow/green water out in the bay for a couple of weeks, but this was the first close-up encounter after a day or two of north-west wind had brought a large patch inshore. I can only imagine it's algae gone mad with nutrients run off from the land by all the rain this month when the water's just about at its warmest. The farmers routinely spray their silage fields with cattle slurry after each cut of the grass, I'd think a lot of that has ended up in the sea recently.

Fortunately, unlike brown peaty water, it didn't seem to have any negative effect on the fishing. I had a string of half-pound pollack that seemed to have appeared from nowhere on this mark, and four chunky mullet. 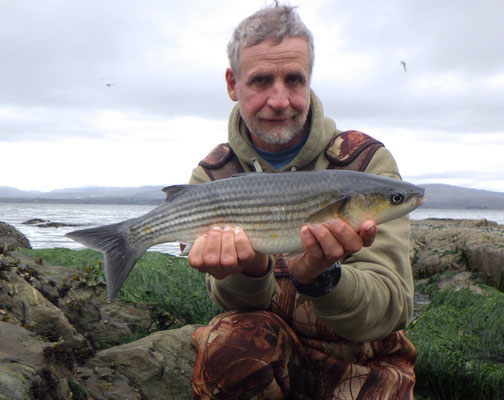 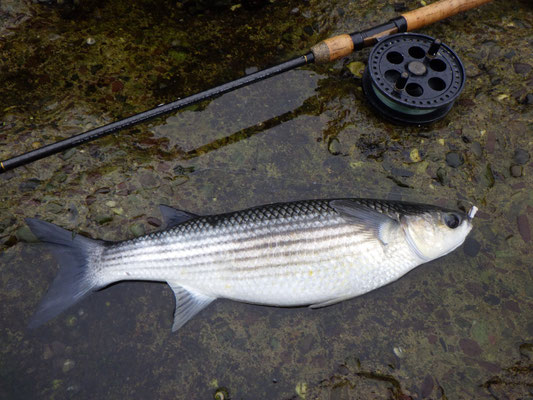 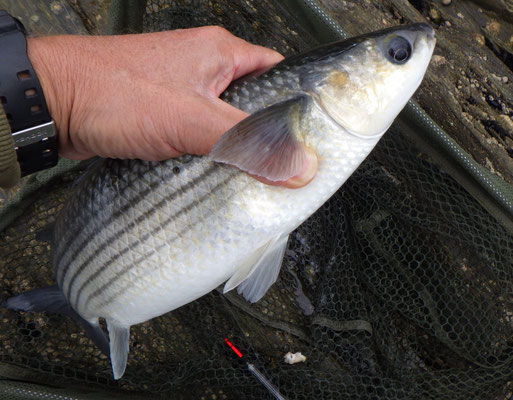 Between times I'd had a mullet trip down to the Mizen which was a blank. It was thronging with holidaymakers down there so I decided not to repeat the exercise till we're out of peak season. And a couple of trips down to Rosscarbery.

The first was in the aftermath of the flooding incidents mentioned above. The water was still carrying some colour but wasn't as bad as I thought it might be, and I really wanted to give it a go in the freshening southerly wind ahead of Storm Ellen as it often seems to fish well in those conditions. In the event, after a slow start, it turned into a real red letter day.

I was legering with two rods from the grass near the bridge. I was half way through my sandwiches at lunchtime when my left-hand rod pulled over. The fish ran out strongly and seemed to hang out there at range for ages before slowly coming back. Eventually I had her close in and in the net ... a lovely thicklip of 5lb 11oz. I did the weighing and the photos and put her back then went back to my chair to get set up again.

Fern Collie had helped out by finishing off my sandwiches for me, hey ho but never mind, I'd barely have had time to eat them anyway as bites followed regularly throughout the afternoon. After the 5:11 I had fish of 4:14, 5:09, 5:06, 4:10 and another 5:06 to finish ... a fantastic session after some pretty dour trips to Ross this year.

A few days later, after Storm Ellen but before Francis,  I was back. I hoping for a repeat performance, but that wasn't going to happen. There seemed to be far fewer mullet in residence, and it was quiet apart from a little flurry of three bites just after lunch. I missed the first, the second was a thicklip of 4:12 and I had a 4:02 on the other rod just as I was baiting up the first again after returning the fish. 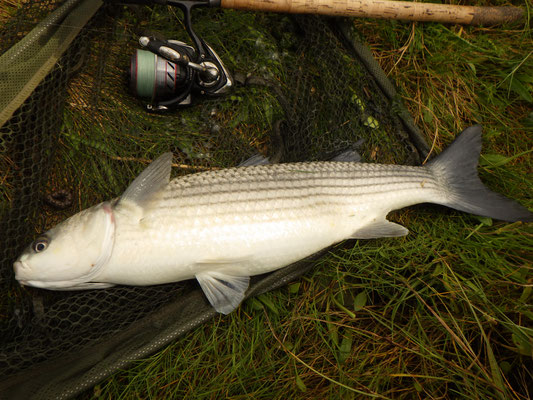 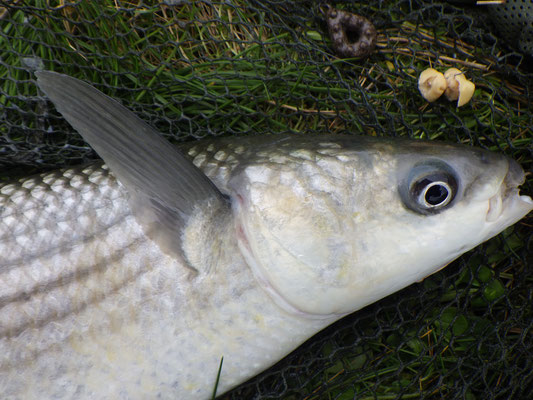 The August bank holiday weekend in UK, this year the 29th to 31st, is always the National Mullet Club's fish-anywhere rover competition. On the Saturday I headed back to Rosscarbery as the venue most likely to throw up a big mullet for this specimen-based event. The water was coffee-coloured after Storm Francis and I couldn't see any fish moving when I arrived. I set up by the bridge, catapulted out some groundbait balls and settled back to wait ...

In the event there wasn't too long to wait, and after twenty minutes or so my right hand rod nodded then pulled over. It didn't feel a particularly large fish but I didn't really have much opportunity to tell, the mullet swirled on the surface and was off.

Next cast, a repeat performance with the same outcome.

A few minutes later I was in again on the same rod. This fish came in quite easily but any illusion it was small was dispelled when it plunged into the deep water in front of the bridge and put up a stubborn resistance for a good five or six minutes. It weighed 4:13.

Soon I had another fish on, this time on the left rod. This one also came in easily then came off at the edge. At this stage I was 3 - 1 down to the mullet and the session was shaping up as a bit of a 'mare. Fortunately though bites kept coming and I turned it round, finishing 3 - 5. Three of the further mullet were also four-pounders - another 4:13, 4:07 and yet another 4:13. I'm fairly sure this third 4:13 was a repeat capture of the first, about four hours between; at least, it had a fresh hook wound in about the right place. 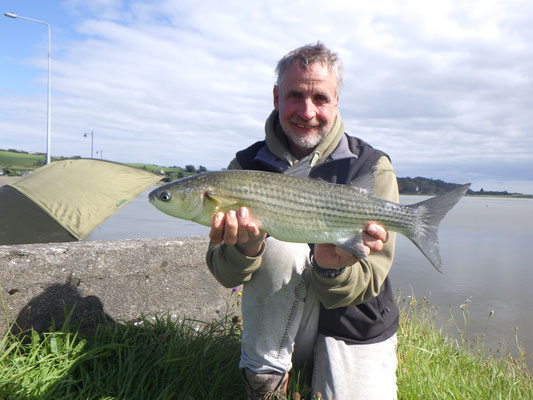 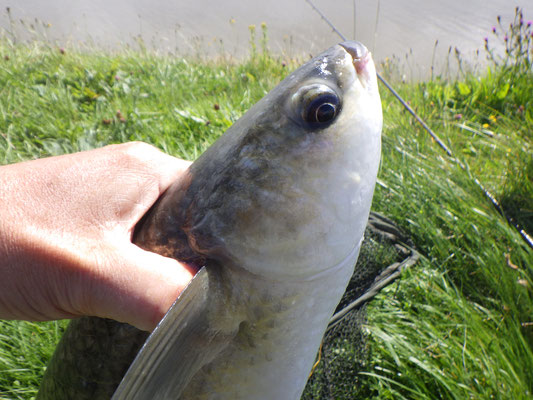 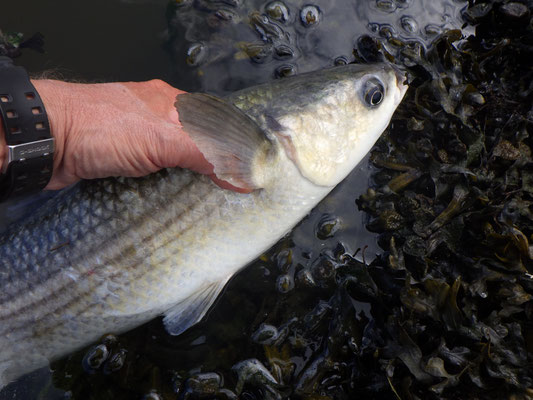 All the fish fought the same way, unusually for Ross, coming in easily then slogging it out close in. I put it down to the heavily coloured water.

On the Sunday I did a brief session on the rocks near the village with no result. On the Monday I dropped in on Rosscarbery again on the way back from a disappointing gilt session. The water had cleared significantly and I found a shoal of mullet in shallow water down the west side of the estuary. I had time to catch two - smaller fish today of 2:12 and one about a pound - before the flood tide arrived and moved them on.

I was pipped to the Rover title by my old friend Ben Mullins who had a 5:06 from the River Adur in Sussex on the Monday; still it was nice to have been top of the leader board for a while. Another friend Paul Howe had a 5:01 from Christchurch Harbour in Dorset, so it was a good competition, albeit a remote one befitting this strange age we are living in.