July isn't normally a month I get to do much fishing but with my work from the UK cancelled this year I found myself with plenty of time on my hands. I was determined not to spend it all mullet fishing ...

Early in the month I did a couple more trips to the Airstrip Strand. It was hard work getting past the dogfish but I landed three more thornbacks, a couple of small ones and my best for the venue so far just a shade over 6lbs. 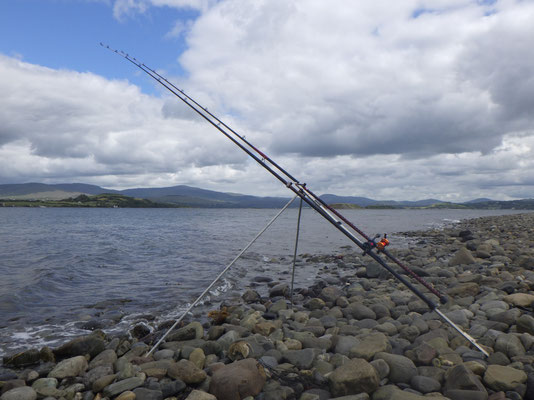 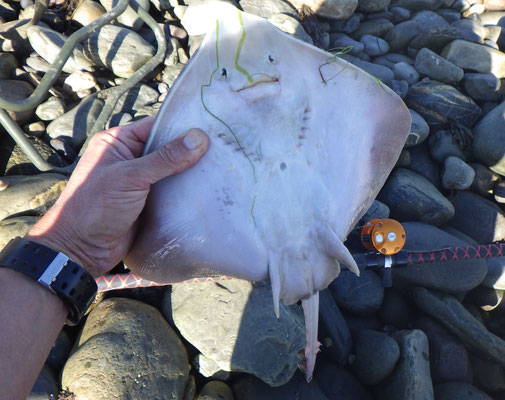 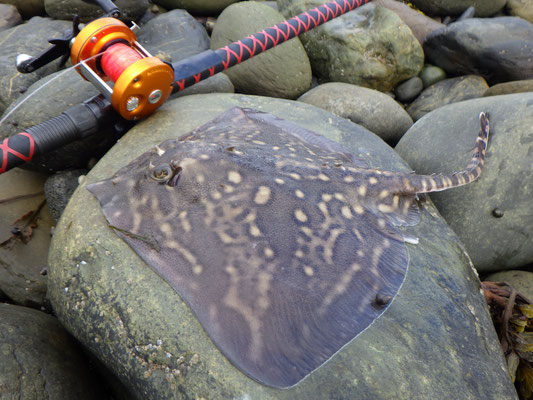 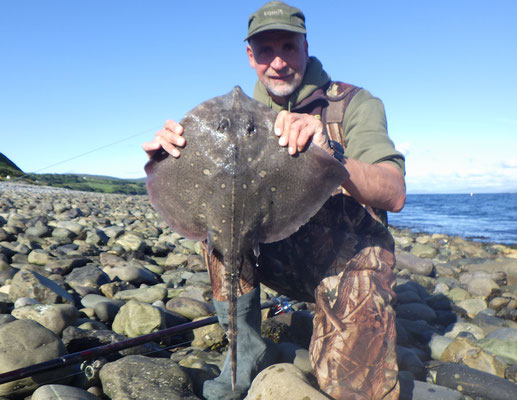 The two smaller rays were on bluey, the larger one on mackerel.

The travel restrictions in the spring cut short my trips up to Kerry for the spurdogs, very disappointing. On the 9th I thought I'd head up that way to fish one of my spur marks. The spurs would be long gone of course, but I thought I might find some larger thornbacks than I was getting in Bantry Bay.

That didn't work out. On the dropping tide it was dog after dog but after the tide turned the huss started to feed and I had six to around 10lbs before I had to evacuate the mark when the access flooded. Most of the huss were on cocktails of raw king prawn and mackerel. The only other captures were a couple of really baby congers. 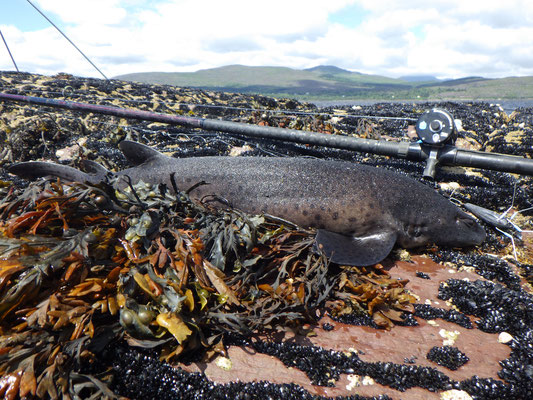 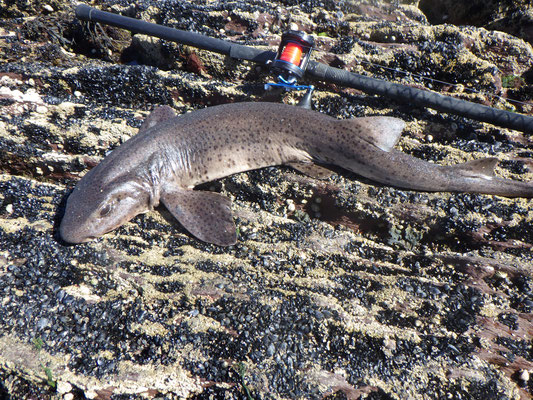 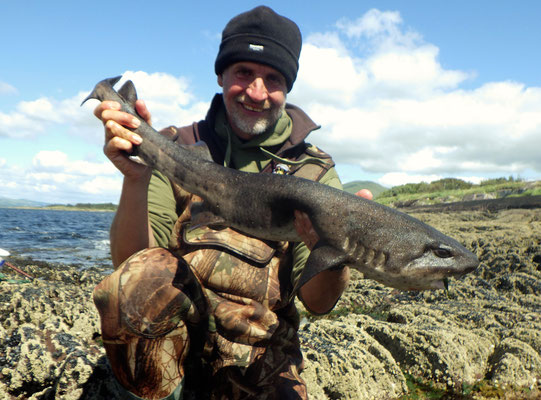 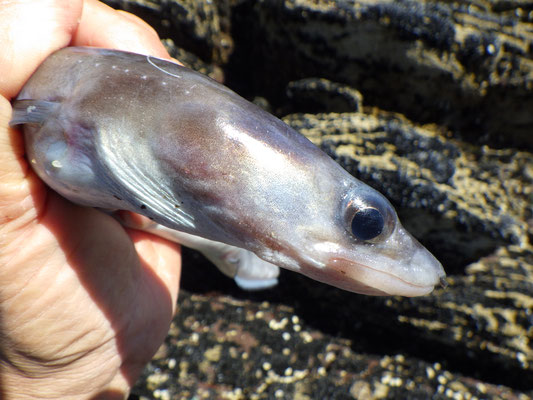 It wasn't quite what I'd wanted but I was happy enough to catch the huss. It's a while since I've had a bag of them back on Sheep's Head though I've had some good individual fish. In fact just the weekend before the Kerry trip I'd been out hunting them on one of the few east-facing rock marks in Dunmanus Bay on an unseasonally stormy weekend. I had a few knocks and rattles that came to nothing then, as the tide started to drop away, at last a decent run on a half mackerel head bait. After an unusually lively scrap I had an unusually black huss on the rocks, 11.5lbs ...

I finished that huss session spinning the sandeels I had left over, and had out a couple of decent pollack.

I only had one other go after the pollack later on in the month, getting a couple of fish of 3 - 4lbs on a dropping tide after failing to catch any mackerel earlier in the morning.

Mackerel have been very scarce so far this year, though I've had reports from the boats and "the other side" that they have been in the bay, at least intermittently.

An early visit to the trigger fish mark where I scored last September also drew a blank.

I did however have some nice middleweight wrasse on a different mark, just on limpet bait ... 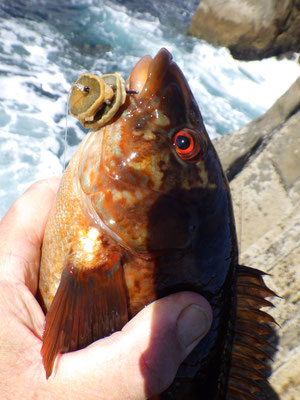 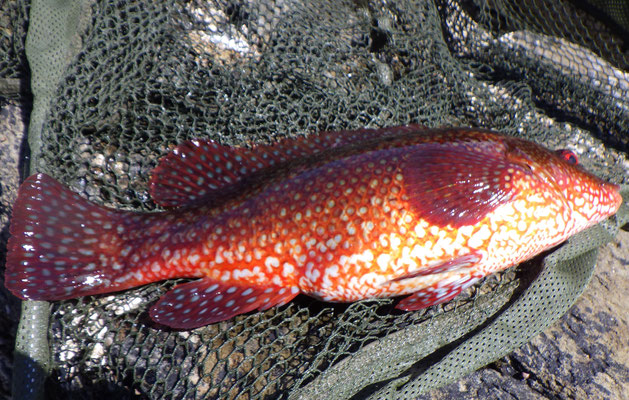 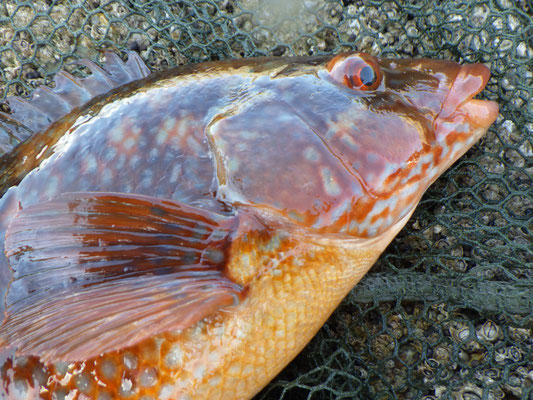 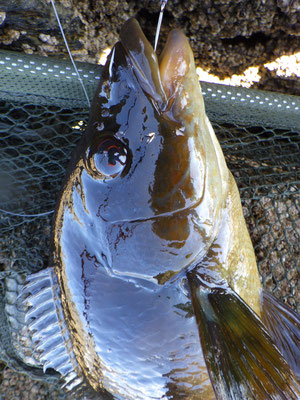 I really should do more wrasse fishing. It's one of those things that gets taken for granted and neglected because it's always there on the doorstep.

One thing I have long had a hankering for is to catch a good gilthead bream ... something else that went onto the back-burner this year during the travel restrictions as the sandy estuaries east of us where they are caught each year were well out of range. I'm kicking myself now that I didn't get straight onto it when the 5km restriction ended in June; in practice it was 8th July before I got my act together.

I dug some small lug near the mark on the last of the ebb tide then set up to fish the narrow channel with a couple of my vintage rods, the Fibatube bass rod and the old Daiwa carp rod, using simple running leger rigs.

Nothing happened for the first 90 minutes, surprisingly not even crabs on the baits. I thought I'd gleaned a bit of useful gilt information from various sources but I was just contemplating I could have any permutation of venue, tide, bait or rig wrong when suddenly the bass rod yanked over in the rest and braid was stripping off the reel.

It took a couple of fumbled attempts to get the rod out of the rest and then I was playing a fish that was running like a train towards a mooring buoy just a way down the channel. I managed to stop that but as the fish turned the hook came out.

I was gutted but cast again full of hope. It soon became bite a chuck as the flood tide picked up but it was all schoolie bass and finally a small flounder as rafts of green weed coming up with the tide made fishing impossible. 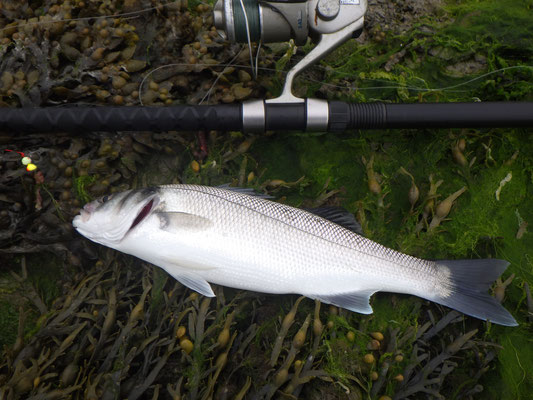 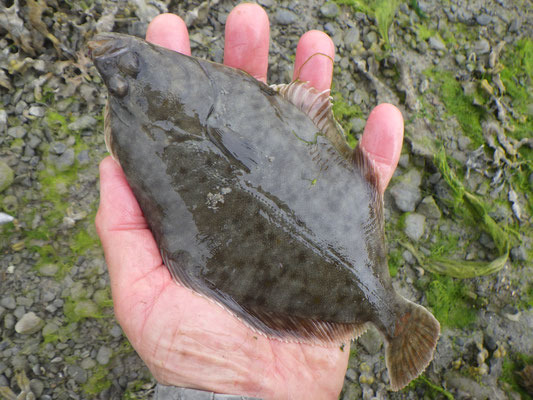 I was back a couple of days later, set up and fishing by a hour before low water. I was expecting another slow start but I had a small nodding bite first cast on the carp rod. I thought it was probably a flounder but I watched closely and was well prepared when the rod tip pulled hard over ...

The fish made repeated attempts to get round the moorings both up and down channel, but no mistakes this time and after three or four minutes I had my first serious-sized gilthead on the beach. It was hooked through the very edge of the lip, a miracle it had stayed on. It weighed 3lb 8oz, nice fish though well below potential for the area - the one I lost was a good bit bigger I think. I made a lash of the self-timer photos so I was glad I took this snap as I returned it ...

I hoped I might get another as the tide flooded back but it was all quiet till the schoolies arrived. I gave it a miss over the weekend as I thought it might get busy, but I was back to fish an evening LW early the following week. Three or four locals were out too, spaced along the channel, including ny Facebook friend Jason.

It was a slow session. As the weed arrived at dusk Jason came walking back past me. I'd only had a schoolie, he'd had a schoolie and a small gilt. Though everyone else was packing up, I thought I'd get one more cast in with each rod.

I cast the bass rod again and the tide almost immediately pulled the line tight. I was just reaching for the carp rod when the bass rod almost launched from the rest. I grabbed the butt and got into a semblence of control ... it was obviously a weighty fish but I could tell from the head-banging going on that it wasn't a big gilt. Sure enough after a couple of minutes I slid a bass out onto the beach, a lean fish of 6lb 15oz ...

I learned later from Jason that a 7lb 1oz gilt was caught the very next evening, but there didn't seem to be any about by the next week when I put in a couple of very slow sessions. There's a chance through August and into September but I'm already gearing up mentally for a proper gilt campaign in April and May next year.

Mullet-wise, nothing special to report.

I did a couple of sessions on the low-water rocks in Bantry Bay. I still haven't blanked there this year but at the moment it's only small fish, nothing much over 2lbs ... 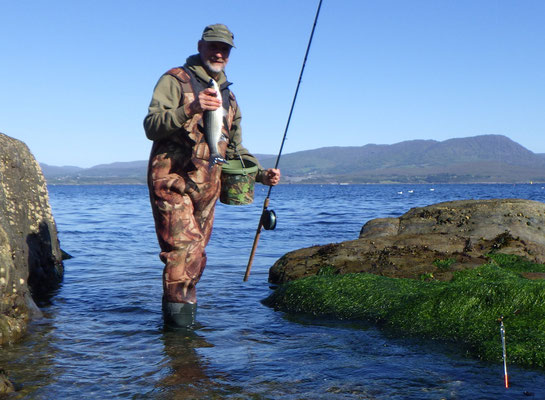 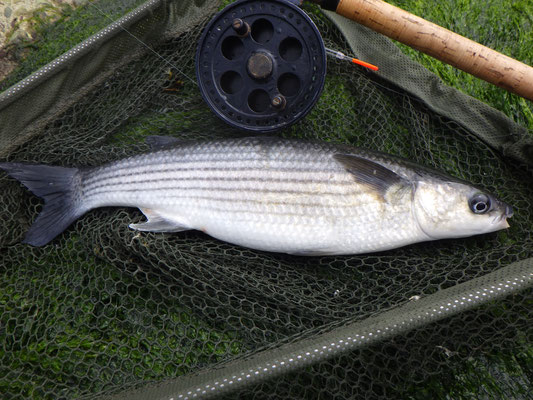 Also I did a couple of trips down on the Mizen. One was a blank legering over the sandflats at high tide. The other, in the low water pool, got off to a poor start when I snapped a few inches off the top of the Acolyte float rod striking into the first mullet of the day. It's the second break I've had on this rod, and though it's now back in use at a slightly shorter length, it's living on borrowed time I think - in hindsight a poor piece of design by Drennan that just isn't up to the rigours of fishing. That first mullet was small, as were the seven others that followed by press-ganging my fifteen year old and completely unproblematic Drennan quivertip rod into some float work. 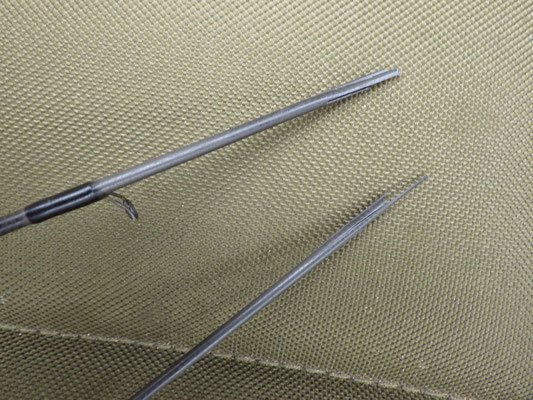 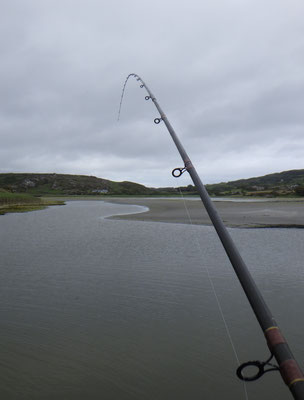 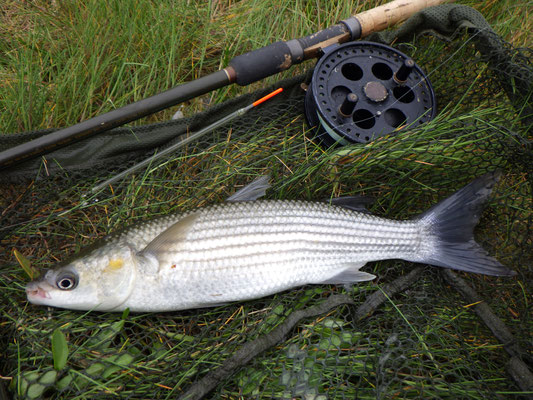 I bought a new fixed spool to use on the float rod, a smaller version of my leger reels, a Daiwa Ninja 2500 BS, to replace the little rear-drag Shimano I've been using since I won it in the NMC raffle a couple of years back. I really just don't get on with rear-drags. It's for those days when I want a bit more casting range than is comfortable with the centrepin and it's a really nice piece of kit for its very middle-range price. I christened it with a little mullet from the bay near home, then had a better one of 4lb 2oz at Rosscarbery towards the end of the month. That was my only visit there in July, and apart from that fish early on it was a struggle to get a bite on either float or leger. 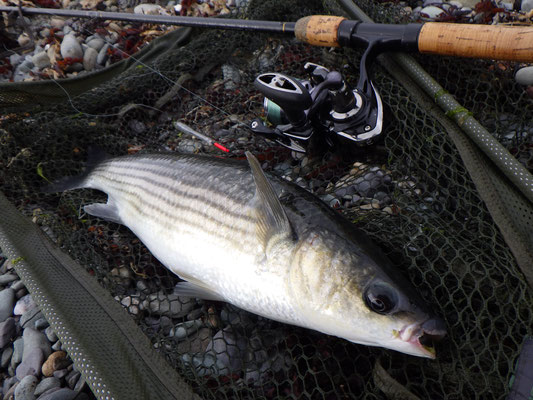 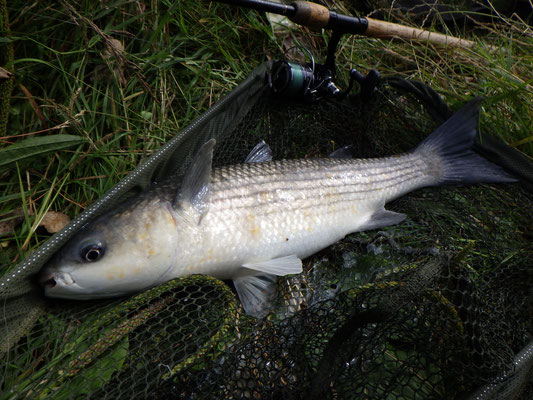 My July fishing went out with a bang of sorts on Tuesday when I was out mackerel fishing on one of the headlands just local. I tripped and went flat on my face! I'm now hobbling around on a very swollen right knee and my nose and right eye look like, well, like I've head-butted a rock. Fortunately nothing broken. I'm scrupulous about not venturing out on the rocks if it's wet or swelly, I wear a life jacket and locator beacon, so I'm really miffed I managed to crock myself through a moment of carelessness on a perfect sunny day ... take care out there and I hope to be back in action before too long in August.