We entered June still on a 5km travel restriction, due to be extended to 20km on the 8th on the government's covid roadmap. Unfortunately the small mullet population of the brackish lake seemed to have dwindled to nothing, perhaps gone out on the last set of springs or eaten by the otters. My attention turned to the bay here.

Some rough weather coinciding with the last spring tides in May had thrown up large banks of weed. Over the next fortnight the seaweed flies did their stuff and as the next set of springs approached, their eggs were beginning to hatch into maggots in patches of the weed. It was before the best of the maggot crop really, a pity because it looked like nearly all of the weed would be washed away on this set of tides and there wouldn't be much left in another two weeks.

I looked along there on the 5th but although the gulls were beginning to find the maggots, the mullet didn't yet seem to have latched on to them. In the event I had out a nice 3:04 thicklip floatfishing bread a few inches under the surface on a different part of the bay. A few days later I had a smaller one in the same spot before finding just a couple of fish mooching along in front of the weed ... I tried for them with bread and with bunches of maggots from the weed, but no joy. 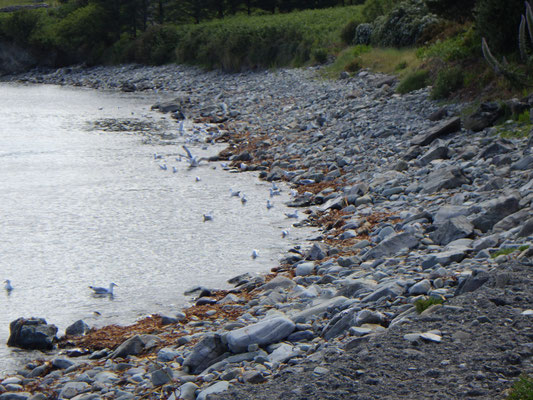 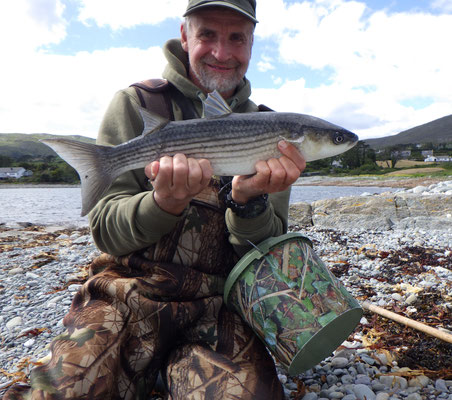 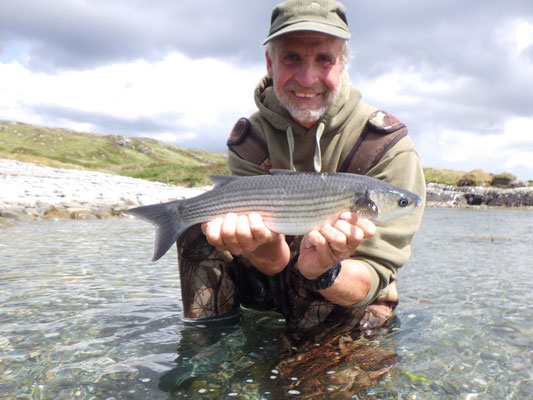 The expected 20km restriction morphed into a go-anywhere-in-County-Cork restriction, and I celebrated this unexpected freedom by heading to Rosscarbery on the 8th.

An unpleasant surprise was in store in the form of masses of horrible slimy green weed that had grown on in the unusual amounts of sunshine this spring and apparently had been pushed into one of the most popular fishing areas by the weeks of predominantly east winds. I could see two or three decent mullet grubbing around amongst it but I gave them a miss and fished near the bridge arch instead where the flow from the lagoon had kept the worst of the weed at bay. It was a disappointing session though with only one decent bite that I missed and a lot of tiny knocks and twitches on the tips from the large numbers of tiddler mullet that were about. I had a last hour on the float in the lagoon but the only result there was a small trout.

I was back on the 22nd on a wet and windy day. Most of the weed had broken up though if anything it was more of a problem now it was on the drift. There were some encouraging swirls going on all over the pool but the more I saw of them the more I realised they were mostly or all down to a few very active seatrout moving around. There seemed to be very few mullet present at all and a lengthy session split between two swims yielded not a single take.

I returned on a nicer day with a smaller tide on the 29th. It was an almost repeat performance but this time I had one good pull and a long, lean mullet of exactly 4lbs on the bank. Notwithstanding this minor success the venue seems to be in something of a summer doldrum. It will come back into form for sure at some stage, but I think I'll not hurry back for a while.

Fortunately other venues seem to have plenty of mullet present. This video clip is from an estuary on the Mizen peninsula on one of several days it was thronging with mullet ...

On the 12th I fished a short session there with Sylvi before we walked Fern along the beach as her post-lockdown treat. In a couple of hours punctuated by a picnic lunch I had eight mullet out. All were on the small side, the biggest barely making 2lbs, but it was a good fun session all the same ... 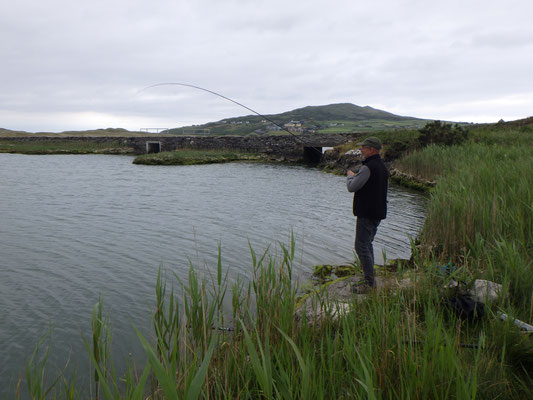 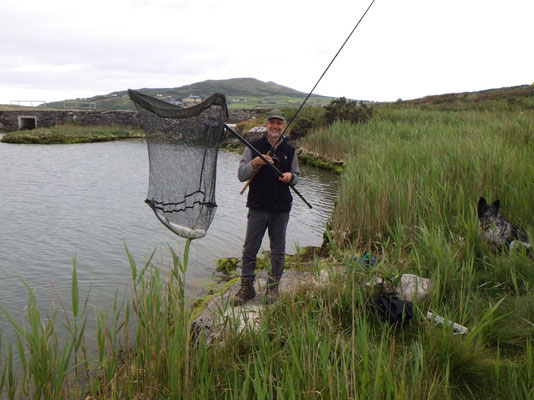 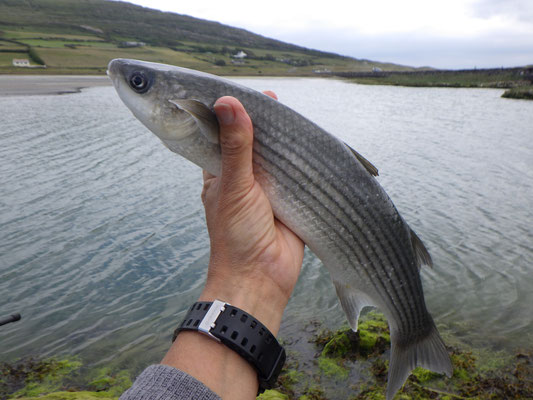 A few days later I was back. There were a few larger fish in the pool this time but still a lot of smaller ones and I just couldn't get past them. Rather than rack up another big bag of small fish I took the leger rods lower down the estuary and caught a lovely 4:03 off the sand-flats at the peak of the afternoon high tide. A week or so later I was back on a slightly larger morning tide and added a 4:04... 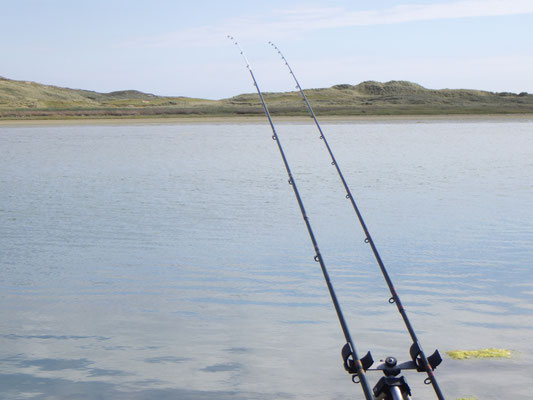 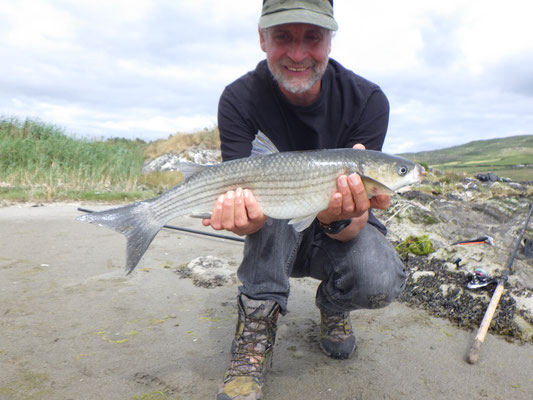 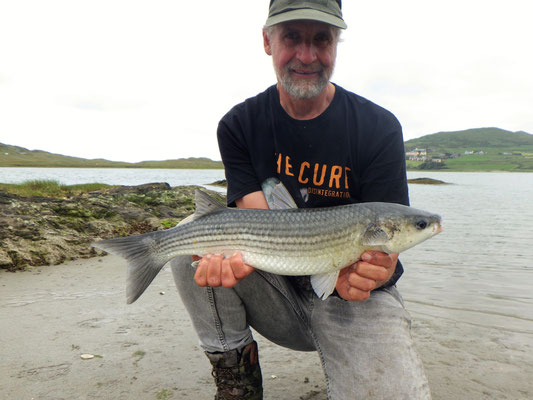 A first visit on 9th June turned out a real mulletfest with eight landed, good average size too with three over 4lbs. I started off with bread but could only get half-hearted interest, they really wanted fish baits though. Unfortunately this was the day my camera battery decided to give up the ghost, I only got a few low resolution pics on my crappy old phone, this is the best of the photos and also the best of the mullet at 4:04.

I did three more sessions over the rest of the month. I couldn't replicate either the numbers or the size of the fish from that first session, but neither did I have a blank and I'll never tire of catching 2lb and 3lb class mullet on float gear, especially on these open marks where they always fight long and hard.

I didn't do a lot out else on the rocks this month. I took the bottom rods out early on in the month in the last of the east wind for what turned out to be a really dour session with just one doggie. The return to Atlantic weather has certainly freshened things up, and in complete contrast today was bite-a-chuck for the four hours till I ran out of bait ... I was just about knackered anyway! Most of it was LSDs but I had a couple of small congers and a single bullhuss around 9.5lbs ... I thought she would be heavier but she was very hollow flanked, probably having recently dropped her egg pouches. 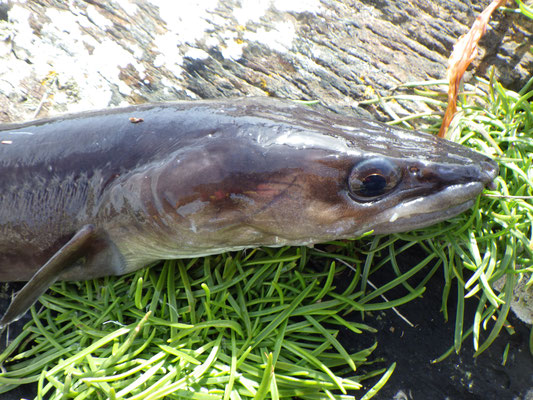 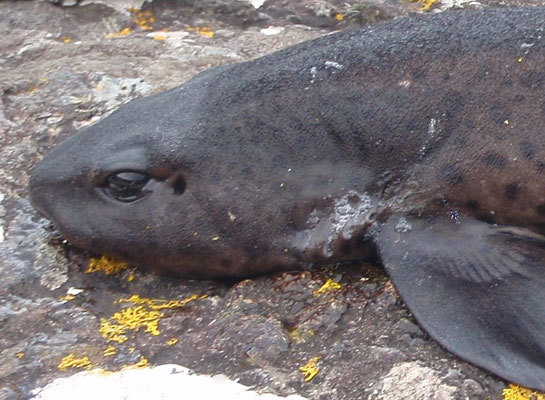 I also had some rattling sort of bites that I missed that I'm fairly sure were mackerel having a go at the big baits that I pop up just off the bottom - reminds me I need to start thinking about a few sessions to top up the bait freezer. I haven't done any pollack sessions this month, but there should be plenty around by this time of year.

I finished the last of my rod renovations for now.

I'm really pleased with how the Daiwa rod (Paul Kerry Carbon Supercast Mk2, on the right) has come up, though I'm not sure how much use it will get - it's a bit light for the rocks here and rather duplicated by my Zzippy 1005s for cleaner ground work further afield.

The other one is an Anyfish Anywhere "Rock" rod belonging to my Facebook friend Stephen ... it's also come together nicely but it's a beast of a rod for sure! I arranged to hand it back to Stephen when he was down our way fishing at the Airstrip Strand near Bantry.

Stephen said the Airstrip had been fishing well and he knew of a couple of people who'd been out that week and caught multiple rays. Stephen himself was just started when I arrived and catching dogfish, and only dogfish as it turned out.

Anyway, I resolved to give it a go on the better part of the tide next morning and before a load of rain that was forecast from about lunchtime.

In an unusual turn of events, the Airstrip decided to be kind to me. I caught doggies of course, four of them, but also four thornbacks.

All the doggies took mackerel, all the rays were on bluey but I don't know if it was bait making the difference or the few extra yards cast on the rod I was using with bluey. Nothing massive, the biggest was a male fish that may just have gone 5lbs, the smaller fish were various sizes perhaps indicating we have several year classes of these fish coming on. 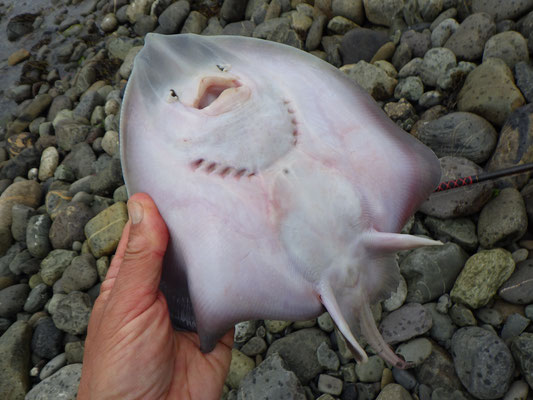 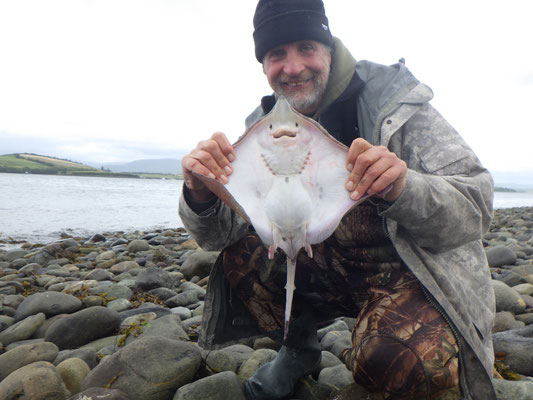 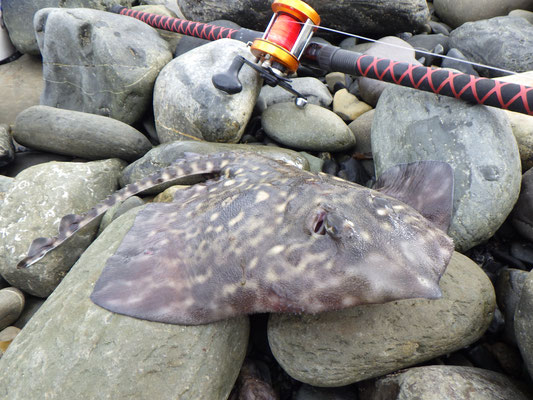 Stephen arrived to fish again just as I was packing up with the rain just starting, and I later learned he'd caught another four rays despite the foul conditions that soon set in. I couldn't keep the momentum going though; another visit a few days later produced LSDs and weed in roughly equal amounts as the venue returned to its normal form.