The 2km travel restriction was raised to 5km, but this did nothing meaningful to increase the choice of mullet marks available. We were blessed with warm sunny weather for the most part but easterly winds persisted on and off throughout the month. Only once did I find a few mullet on the open shoreline of Dunmanus Bay and I couldn't get them interested in feeding in the fleeting opportunity available. This left me with the brackish lake, and unfortunately numbers appeared well down from when I'd caught in April.

I found an old research paper online about the lake, which is apparently a designated Local Nature Reserve though there's no signage on site to suggest that. It was an interesting read though not an encouraging one ... an unusual ecology but not a rich one, with few species of flora and fauna able to cope with both the sudden increase in salinity when spring tides break in and massive influxes of acid, peat-stained water after heavy rainfall. Relatively poor feeding is perhaps why despite looking the part the lake never seems to hold more than a handful of sizeable mullet. I also wonder whether even on spring tides many fish would be deterred by the journey up through the narrow channel and under the very low flagstone bridge.

Anyway, I dutifully turned up on the 1st to try to keep my monthly run going. The tides were neap and the water level in the lake had been dropping for several days. I wasn't sure there'd be enough depth to fish sensibly close in but I decided to have a go, and was surprised when the float shot away on only the second run through. My strike met a momentary resistance and then I wound in a single mullet scale  progged on the hook point!

A long quiet spell followed then a couple of half-hearted dips of the float as the session petered out into a blank. I decided to wait till the water level was higher before trying again.

I was back on the 8th, the lake having had a good top up from both some rain then the first of a series of spring tides. I could see a few mullet moving that looked reasonable in size, but they were just cruising around and clearly not feeding. Then as the tide outside neared high and water began flowing into the lake, I started getting, and missing, some tentative bites.

The water was in danger of flooding over the grass where I was sitting. I stood up to move my tackle to higher ground and - crunch - I promptly trod on my landing net handle. I was inspecting the damage when my reel clutch started screaming; I looked down and the rod tip was pulled over fiercely with a fish heading towards the middle of the lake. I dropped the net and grabbed the rod ...

It's rare for a mullet to self-hook on float tackle and an early thought was that I didn't really deserve this fish. Still, we play the cards fate deals ... the mullet carried on running but eventually turned and I was able to play it in fairly easily. I was suprised by its size when I first saw it, a long fish well over 4lbs. I wasn't sure if my net handle would be up to the job of landing it so I started to look for places to beach the fish, but the mullet had other ideas and ran round to my left and up the channel, against the tide towards the bridge. I had to stop that so I piled on the pressure. To my relief it turned and swam out again but to my dismay it had picked up some blanket weed on the trace. The weed inevitably slid down the trace and just as I feared when it reached the hook, the hook popped out. It's happened before, and it will probably happen again; the extra stress from the weed is enough to break out a tenuous hook-hold. If I'd got a proper strike on the fish in the first place the hook may have been better set.

I was deflated to put it mildly but fished on and had several more bites, missing the lot. In hindsight I'm not sure on the size of the fish involved.

I repaired the net handle the next morning with the help of a section cut from an old Penn beachcaster I was keeping in the loft for just such occasions. Disasters often seem to happen in threes so after breaking the net and losing the fish I wondered what trauma today would bring.

It didn't take long to find out. I arrived at the same swim to set up and found a fresh but very chewed carcass of a large mullet in the margins. I fear Mr Otter found "my" mullet while it was still knackered the night before, and made a good meal of it.

Again I had to wait for the new tide to arrive before getting any bites, but I only had four or five this evening very randomly, and again didn't latch into one.

The next evening was cold with a north-east wind whistling across the lake. I nearly didn't bother but waded out so I could trot back down the wind and after half an hour or so started getting regular if tentative bites. At last I hooked one - a tiny mullet of just a couple of ounces.

I wouldn't have been too proud to call that my "May mullet" but I really wanted something bigger.

I gave myself a day off and went back on the 12th, armed with the leger rods for a change of tactics.

It was a quiet session with only small mullet showing close in and no action on the tips fishing further out. I was just contemplating a last hour on the float when the right hand tip twitched a little - not much, but enough to persuade me to give it another cast.

This time the same tip dropped back slightly, rattled around a little then started to pull over. I struck and was into a fish and a fight very reminiscent of the other evening. The fish ran out strongly, came back gradually then kited left. This time it went beyond the channel back to the bridge and into the very shallow bay beyond, and disaster nearly struck again when it fouled one of several clumps of bladderwrack growing off large stones. Fortunately, as I waded out with the landing net, the angle changed and the line pinged off the weed, and I was able to net the fish normally.

The mullet went 4lb 4oz ... by far the biggest I've landed from the lake, a plump fish but noticeably shorter than the one I lost.

as they have been very scarce since. Two more legering sessions have produced not a single bite.

Two sessions on the float produced plenty of bites, but visibly all from shoals of tiny mullet.

Then on a quick evening session on the 28th, the shoal of tiddlers was gatecrashed by a better fish. It was no monster but a pretty and lively thicklip just under 2lbs.

I'm glad to have had the lake within the travel radius allowed; it's been interesting and it's kept my monthly run going. But I'm looking forward to June 8th when the new 20km restriction should allow access to one or two more prolific marks.

Meanwhile in other news ...

I've had the two refurbished bass rods out on the south side rocks chasing pollack, only short sessions as there doesn't seem to be that many around yet and it's been quite hard work getting a few. On the plus side there seems to be a fair proportion of decent sized ones among them and I've had a fish or two around 4lbs most times out, nice eating size. 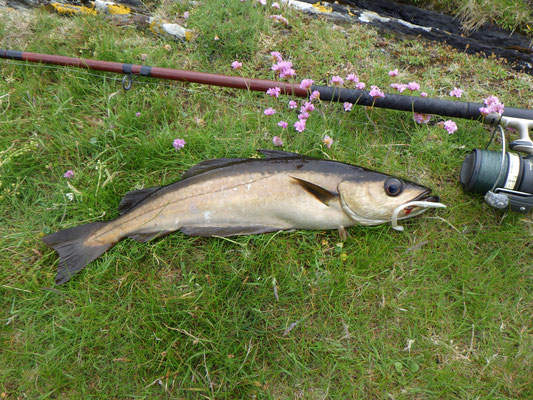 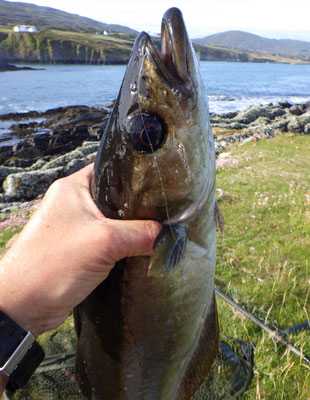 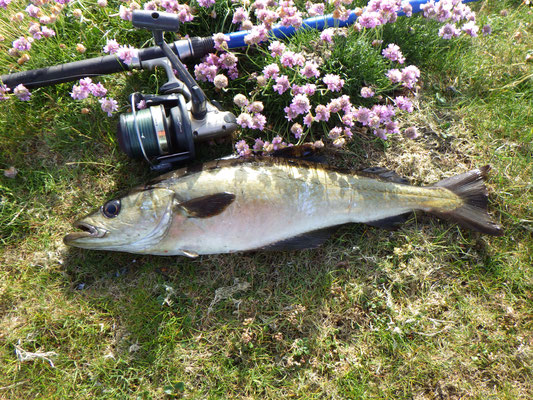 The bottom fishing from the rocks hasn't really kicked off yet, apart from dogfish which seem to always be the last fish to be put off by the east winds.

I've had a couple of sessions on north side marks within 5km, one already reported on and one earlier today which turned into a doggie-fest with bites literally every cast. In the midst of it all a couple of strap congers turned up, one on each rod barely ten minutes apart. The bigger one here may just have gone 10lbs.