Some more rod renovations as the covid lockdown grinds on...

These are not as old as some of the others I've been giving a facelift, but they still have history.

On the right is my Zziplex 3500. It was a gift from my friends and colleagues in 2000 when I moved on from Fareham College in Hampshire after nineteen years there teaching physics. It's a lovely slim blank that in many ways reminded me of my original 1005, more so anyway than the Dream Machine GS Match I'd had in the interim.

In 2001 I caught a 52.5lb stingray on the 3500, by accident really when I was hound fishing at Selsey but it won me the fish of the month competition in Sea Angler magazine, and the prize was the rod on the left. It's a Shimano Antares 129 Beach. It is a nice blank but the rod came without any sort of reel fitting which I thought was a bit cheapskate (I bought coasters for it) and the rings had poncey gold ceramic liners which started chipping and cracking at the first sight of a shingle beach, so within a couple of weeks I'd had them off and replaced them with a set of BNHGs. 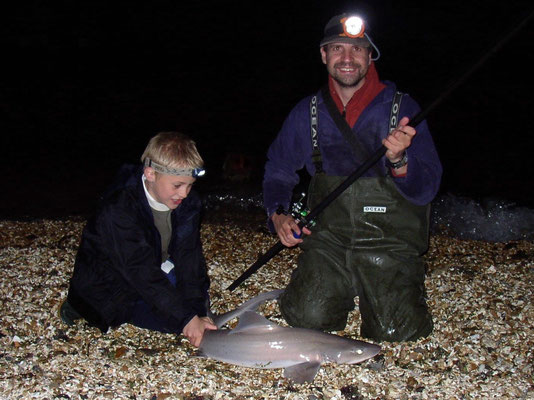 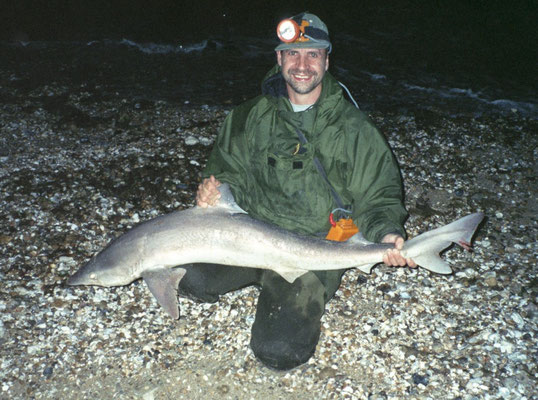 The 3500 and the Antares are still my first choice beachcasters. The coasters I used back in UK have been found a bit wanting on the rocks here with bigger reels and heavier line - it was difficult to get them tight enough to hold the reel completely firm, particularly when pulling for a break. So both rods now have a Fuji screw fitting, with a token coaster just for something to wrap my index finger round when casting.

I took the rods out on the rocks yesterday, on one of a few marks on the Bantry Bay shore of the peninsula that are within the 5km range of home we are allowed now.

It was a joy to be out but unsurprisingly after weeks of easterly winds, in bright sunlight and with a seal for company on and off throughout the session, the fishing didn't really shine.

Sporadic rattly bites produced only a handful of dogfish, no huss or congers at all.

The session was rescued to an extent by a screaming bite on the Antares as the tide started to drop away.

I could tell straight away this wasn't one of the usual bottom fishing suspects.

I had hopes it might be a ling - I had a small one on this mark last year - but in the event what surfaced was a decent pollack of 4 - 5lbs. It had taken a mackerel head bait popped up a few inches off the bottom.

I didn't have any spinning gear with me but I had a few casts improvised spinning a long mackerel belly strip using the 3500. It made for a nice end to the session, getting a few more though smaller pollack. I must get out for a go after them properly.

I thought the two beach rods would be the end of the rod renovations for now, but a Facebook friend saw the pics I posted and asked me to take on an Anyfish Anywhere beachcaster he'd been given a while ago but not had time to do anything with.

If any rod has ever needed a bit of TLC this is the one. It's lost a few inches off the tip but it's such a stiff blank (their 13' "Rock" rod) I can't see that making much difference. It had had several replacement rings in various styles and the whipping was a bit rustic to put it mildly!

I like to do rods in pairs for economy of postage getting the parts mail order and to mix up epoxy for the whippings in larger amounts. I remembered I'd brought an old Daiwa Paul Kerry Supercast II rod (circa 1989) over when we moved and put it straight up in the loft ... so that's down now and both blanks are nicely cleaned up and freshly varnished, waiting for the bits to arrive from UK.