After those first few calm days and my mullet on the 5th, the February weather has been truly dire. Storms Ciara, Dennis and Jorge have written off three out of four weekends and the weather between was scarcely better with a string of other low-pressure systems pouring in off the Atlantic. I don't think there's been such a protracted windy spell since we moved to Ireland and the rain ... well at least living on a mountainside we don't have to worry about flooding.

It was an effort to get out fishing at all but fortunately there were a few brief gaps in the dismal weather.

The wind dropped light on the afternoon of the 18th in the aftermath of Dennis. I headed out onto the pier that evening not sure what to expect, but in the event the huss were unusually active again. Perhaps the water in the bay, now as coloured as I've ever seen it, suits them. I missed a few runs and latched into five. Two were only 5 - 6lb size; two better fish let go of the baits as they reached the surface but fortunately the best of the night had the circle hook firmly planted in its scissors. The scales said spot on 13lbs, equal to my personal best ...

Now I like catching the huss and I especially like their bristling attitude, but you can have too much of a good thing and my mind wandered to other possibilities for the next weather window. Mullet fishing seemed out of the question in the prevailing conditions. The IFI specimen list was published and I noticed several of the big spurdog caught in Co Kerry last year were taken in March  ... the traditional season is later, April into May, but might it be worth a try in February?

The first opportunity arose on the 23rd. It was a grey old day with outbreaks of rain but the wind was north-west and my rock was sheltered by the hillside behind. Although the swell was 3 - 4 metres outside, not too much was running up the bay so it was eminently fishable. The water was a dreadful colour though and I wasn't too hopeful. But still, I was there now ...

Second cast I had a good pull on a squid/mackerel cocktail on my left-hand rod. It was a much livelier fish than the average huss, zipping powerfully from side to side and even taking a little line off the drag. Eventually a spurdog surfaced close in, and it looked massive compared to the ones I'd had last year. I had a reef of rock in the water just in front of me but I managed to manoeuvre the spur into the gully on my side, intending to steer it along the gully then slide it out onto the rocks. Unfortunately a bigger swell came in and took the fish back with it over the reef. That was a bit nerve-wracking but I steered it round for another go and this time everything worked out. The scales hovered just either side of 14lbs as steady I could hold them, my best spurdog by a mile ...

It was still early in the tide and I was hopeful of getting more spurs, but that wasn't to be.

About three hours later I had a persistent bite on a double sandeel bait. Instead of the expected LSD, a small thornback emerged from the depths. It was only a 2 - 3lb, a good 10lbs or more below my thornback PB, but it was the first I'd had in Ireland so some kind of milestone.

A few minutes later a very similar bite yielded the expected LSD. The rain had really set in now and was getting heavier, with rainwater running out of every orifice on the hill behind and trickling across the rocks. It seemed a good time to call it a day.

I was back on the 27th, a much nicer day, spring-like even. The water had cleared significantly but unfortunately another problem manifested itself as I was setting up in the shape of three scallop dredgers working close inshore. They persisted much of the day, working over and over the same ground. Two stayed just barely out of range but one repeatedly swung off his line in close to the promontory I was on, sometimes so close I could have lobbed rocks onto his deck. 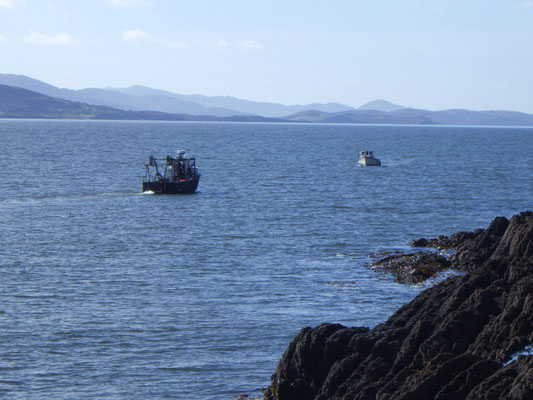 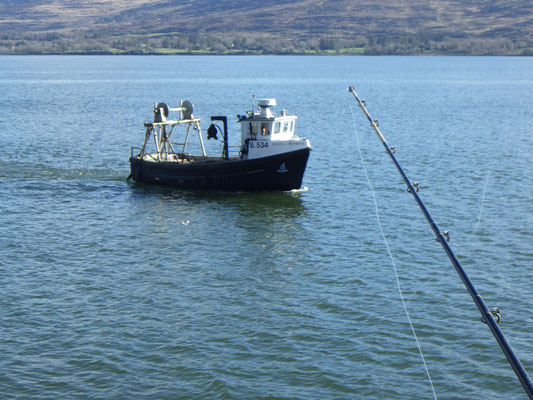 I'm not really sure what his problem was or what point he was trying to make, but I wasn't about to move having invested the time and effort into getting to the spot. I thought it was pretty churlish behaviour but it wasn't even that much inconvenience having to wind in every thirty minutes or so which is pretty much what I'd have been doing anyway to change the baits.

Fishing-wise it was quiet the three hours down to low water then an hour back. It was already past the state of the tide I'd had the spur last time and I was beginning to fear the worst when my left-hand rod tip lurched down. This turned out to be a spur about 9 - 10lbs and everything went well till I started sliding it out onto the rocks - suddenly it was off, sliding back and bolting away into the depths. I was gutted to put it mildly after the long wait and dredger-hassle, but fortunately redemption was not long in coming. On the very next cast I was in again and this time the spur hung on. It was a nice fish but obviously well shy of my PB so I didn't weigh it, estimated 10lbs+ ...

Soon after the scallop dredgers finally moved off for the day. The fishing went quiet again. I ran out of sandeels and ran out of the mackerel I'd been using to make up the mackerel/squid cocktails that both spurs had taken, but I still had plenty of squid left. I decided on a last hour with whole squid baits on both rods. This hour proved to be busy ...

The first pure squid bait was taken within five minutes, while I was still lashing on the one for my other rod. This felt a heavy fish which thumped away till I had it under the rod tip, then it spat out the bait. Ten minutes later, a repeat performance on the next bait on the same rod but this one let go a little further out. The hook point was clear on both occasions so I guess it was just a case of the fish clamping their jaws onto the wrong part of the squid. This is typical huss behaviour and I'd like to think both fish were huss, but I have a nagging thought they may have been big spurs.

Twenty minutes later, I had a more rattly sort of bite on the other rod that came to nothing.

All a bit frustrating ... I had a last cast on each rod with my last two squid, had another rattling bite back on the first rod, and landed my second spur of the day, a smaller male fish about 7 - 8lbs.

I packed up feeling I could have done better but overall it had been an enjoyable session despite the losses and the unwanted company for a good part of it. Two target-species fish landed in pleasant weather conditions can't be all that bad.

As I write Storm Jorge is lashing hail against our windows and the unsettled spell looks set to carry on into March. We are off to UK for family visits shortly and hopefully it will settle down while we're away.