After the busy session on New Year's Day, the Rosscarbery mullet fishing quietened down in January. I went down twice, on the 8th and 22nd, and on each day I could see a shoal of mullet well out in the middle of the pool and mainly staying put. The sessions became a bit attritional, whacking out leger baits to maximum range and hoping an odd straggler would find them. In the event I had just one mullet each day, both middle three pounders ... 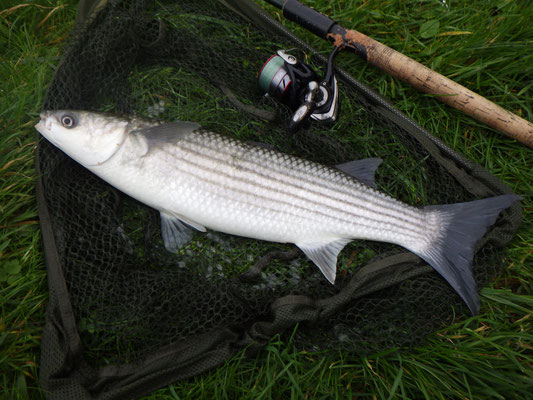 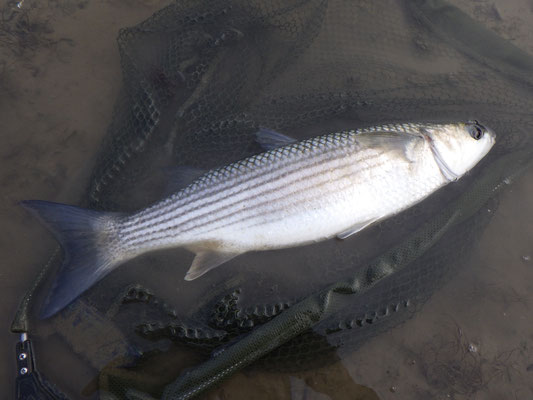 And so on into February, and I was back on the 1st with a mission to catch a mullet, any mullet, which would bring my tally to 24 months consecutive catching since March 2018.

It was a fairly horrible day, overcast with a cold westerly wind raking across the water and, unsurprisingly under the circumstances, no fish showing. I settled for the relative comfort of fishing from the wall on the west side with the wind off my back, but after four hours I'd not had a bite and I'd only seen one (possible) mullet swirl.

In the last hour of daylight the wind started to ease and with the water shallowing off I started to see mullet. Most were way out of range along the fringe of the mudbank in the middle of the pool but a smaller group was showing in front of the shingle area east of the bridge arch. I headed over there, jumped down the wall and was soon set up for what turned out to be a frustrating hour with mullet swimming all round my baits but no sign of a proper take. The only movements on the tips were two very obvious line bites, the quivers pulling round slowly then springing back as the line pinged off the mullet's dorsal fin. I regretted not moving earlier - okay they weren't feeding now but probably they'd have had a short feeding spell some time earlier in the day.

I was back yesterday on the 4th, a much nicer day to be out, very spring-like indeed.

The mullet present on my last trip would have been trapped in the pool on a very neap set of tides and they now had formed a single shoal that was very visible in the calm and sunny conditions. They were very skittish, probably because they were being regularly harrassed by one or more of several cormorants lurking around the pool. The otters had also been having a go overnight, with some success.

I fished off the grass by the bridge and had the shoal over or near my baits on and off throughout the day. I had lots of knocks and taps on the tips but disappointingly nothing I could strike. I think most or all of the indications were line bites as the shoal moved past; they just weren't feeding properly and a second blank February trip resulted.

I looked at the weather forecast last evening and it wasn't great news - getting gradually windier leading up to Storm Ciara at the weekend and what looked a protracted unsettled spell to follow. It wasn't obvious when (or if) it would be fishable again in February and I doubted if the mullet would hang around in the rough weather once they could escape on the bigger tides. So I decided I'd better head back today before it got too bad.

I was greeted by a moderate breeze from the south, usually a good wind direction though there was a chilly edge on it today especially when the sun disappeared behind a cloud. The mullet shoal was less visible in the gentle lop but showed itself from time to time, mostly off to the east of the bridge arch. I decided I could reach them from the corner of the grass by the bridge so I set up there.

The shoal seemed more settled, possibly because all but a couple of the cormorants had disappeared overnight, but the mullet were still not feeding well. I had a few gentle pulls on the tips that I was fairly sure were actual interest in the baits not just line bites. Interestingly they would come within a minute or so of casting, almost as if the mullet were sampling the newly arrived bait but deciding against ... I struck at a few but apart from briefly feeling one fish, no luck.

Then, just after I'd finished my lunch, one hung on properly - the rig had barely settled after casting out a fresh bait when the tip pulled round. No strike was needed - I grabbed the rod and was into a lively fish. It scrapped well and I certainly took it easy - I really wanted to land this fish after about fifteen blank hours and no guarantee I'd get another chance today or even this month.

After five minutes or so it was in the net. 3lb 14oz but most importantly a February mullet to top off a run lasting two years ...