To be fair, there's not a great amount to update here! I was busy with exam work throughout November and well into December, and the weather was mostly wet and windy. I did however get out in a few of the calmer interludes to try to keep my monthly mullet run going.

The first outing was on 16th November, but after an unusually early frosty night I wasn't too hopeful. I had a good look round on arriving at Rosscarbery. It was very calm so there'd be no problem spotting mullet, but there didn't seem to be many in residence. The only movement I could see was just an odd fish or two well out in the pool, and the closest I could get to them was on the first section of wall on the west bank. I welted out two leger baits as far as I could, and crossed fingers one would stray within range.

A couple of hours into the session one of the tips nodded, and I was in! It seemed a modest fish, but I felt unusually nervous. I really wanted to land this one as I knew it would probably be my only chance of the day on my only chance to fish in November.

I gradually worked the fish closer, and eventually had it at the base of the wall. A couple of anxious moments with the net and it was mine ... only 3lb 9oz but a November mullet, job done. And just as well as I didn't get another bite for the rest of the day.

I was back on 3rd December on another calm day following another frost. This time I couldn't see any movement at all when I arrived, though I wasn't too despondent as the tide was still well up and I thought they may start to show as it dropped.

I set up further down the west bank, but after three hours I hadn't had a take or seen a mullet apart from some fry-sized stuff close in. I decided I'd go to have a look at the Clonakilty estuary, but as I drove up to the N71 I saw a swirl right in the corner of the pool there. I got out of the car and there were hundreds of mullet all turning and swirling and obviously feeding on something, though it wasn't apparent what.

I tried on float for the best part of an hour, fishing baits on the surface, below the surface, just off bottom and on the bottom. Despite having mullet all round I couldn't get a proper take, just false bites from time to time as a fish would pick up my line on one of its fins and the float would sail away before a fruitless strike.

Away from the main melee there seemed to be a few stragglers further out, so I put the leger baits out there. These fish proved more obliging and I had three good takes in about forty minutes till the shoal suddenly upped and moved out of range into the middle of the pool. I landed all three fish, all mid-3lb size.

An exceptionally windy spell of weather followed, culminating in Storm Atiyah on the 8th. And then the wind went northerly, and a really cold snap followed with a few days of heavy frosts and icy roads, unusual for West Cork and especially so before Christmas. I wasn't surprised that my next trip out was a blank.

My final visit of the year was on the 28th. The weather had finally settled down over Christmas into a calm, mild spell so I was hopeful of some mullet action. I couldn't see much on arrival so I set up near the bridge arch where the water is a bit deeper than the rest of the pool. I soon started seeing occasional flashes from mullet flanking on the edge of the flow from the lagoon, so I cast both leger baits into this area.

It certainly wasn't a hectic session but I had knocks and taps on the tips on and off throughout, punctuated by four good takes. The first two fish came adrift but I landed the others, 2lb 10oz and 2lb 8oz. Not big but I'm still of the mindset that any winter mullet is a triumph over adversity. 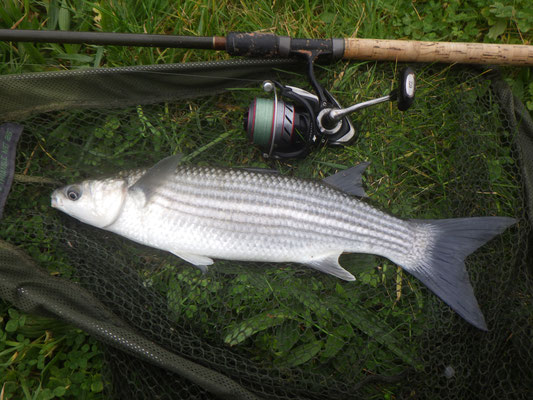 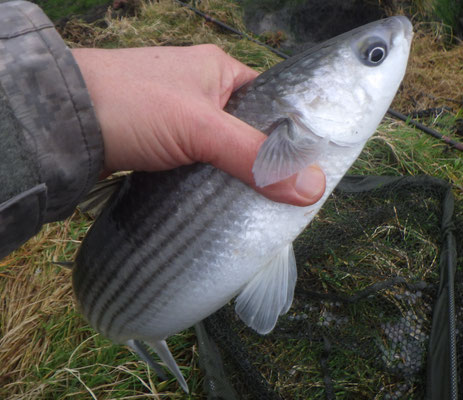 I've now caught mullet every month in 2019, the first time I've ever completed an actual calendar year of mullet though I've done twelve months running a couple of times since moving to Ireland. In fact I "just" need January and February for 24 months running since March 2018 ... and as the weather looks to be settled for a day or two into next month I'm hopeful of some progress there shortly.

Here's wishing all my blog readers a happy and healthy 2020.