Late in July a German friend in the village had visitors, including twin lads who wanted to go fishing. I somehow got volunteered to take them ...

The lads had matching little Savage Gear spinning rods, and I've got to say they were experts at working lures with them. No surprise really as later on they showed me the pictures on their phones of their freshwater catches back in Germany - some massive perch, zander, pike and other fish you wouldn't normally associate with lures such as barbel and wels catfish.

Unfortunately their arrival coincided with a spell of wet and windy weather, and on the first morning the only mark we could fish safely was the pier.

While I failed miserably to catch any mackerel, Jonathan had some decent pollack for the venue and his brother Jamil was unlucky to lose a big ballan wrasse hooked close in.

Later we tried the rocks on the north side of the peninsula, but the swell was against us and there wasn't much doing in the more sheltered spot we moved to.

Conditions didn't improve much over the week of their stay, with more wet and windy interludes and a swell off the Atlantic that, unusually for summer, didn't drop much below 3m all week ... and all this at a time when the rest of Europe was basking in a heatwave with temperatures up to mid-30s Celsius in UK! The lads fished mostly from the pier, catching more pollack and some big mackerel and losing what sounded like a decent sea trout.

It was their final morning before the swell relented enough for me to get them out on the rocks again, and we tried a couple of marks on the north side. The fishing wasn't at its best to be fair but the lads stuck with it and caught some nice fish. Here's Jonathan with another pollack, and Jamil with a wrasse ... 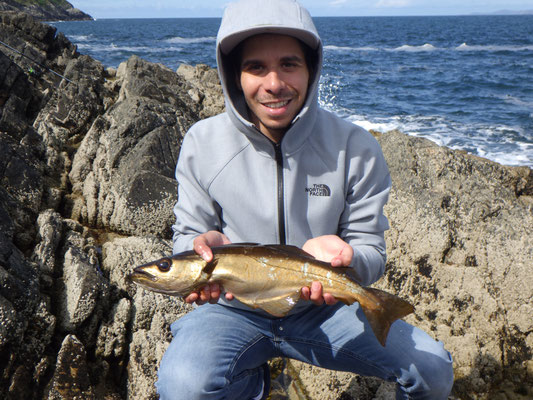 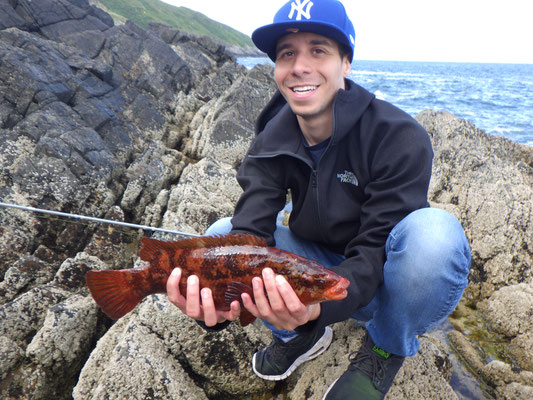 On 2nd August I got out for a short evening session spinning for pollack from the rocks on the south side. The swell conditions were marginal but the mark seemed in good form, with lots of fish in the 2 to 3lbs class, a couple just either side of 5lbs that I kept for eating, and a beauty around 8lbs that unfortunately I lost in the swell at the edge when it ran the trace along the rock before I could get the net to it. Most of the fish took a bubblegum pink Redgill. Interesting colour variation on the two I kept - the bronze one popped up out of the kelp close in to take the redgill, the pale one took much further out, possibly over cleaner ground? 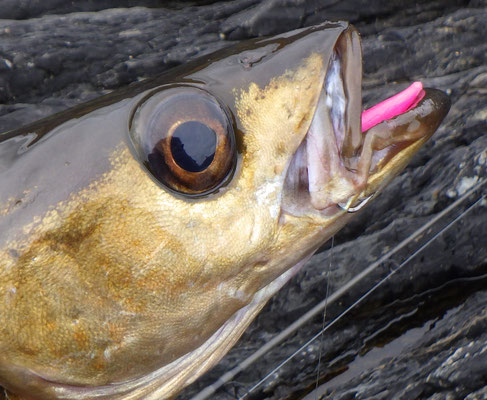 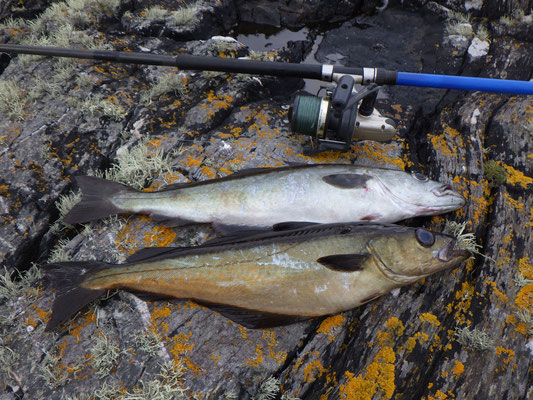 Since then I've been back on the mullet as my old friend Mick Buckley was staying with us - more on this later - but with Mick's departure I was out on the rocks today. I fished a deep mark on the north side ...

... specifically with the intention of bagging up with mackerel which appear to have arrived en masse these last few days after a very patchy season to date. I was into fish from first cast to last, with very few quiet spells. I stopped at 65 which is plenty for eating fresh and into our freezers both as food and bait. 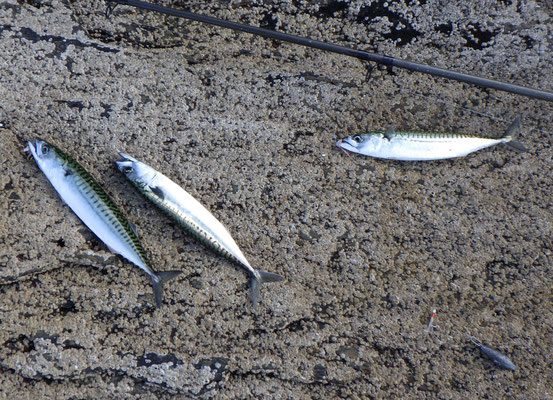 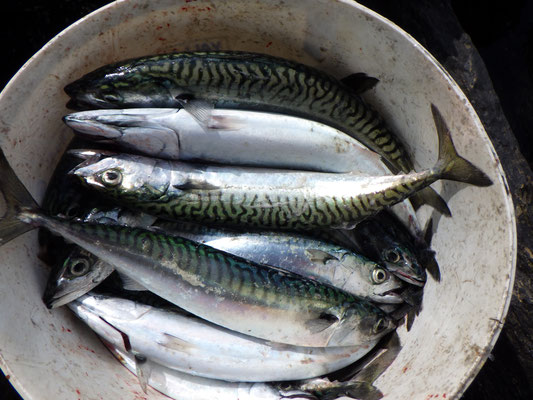