I next ventured down to Rosscarbery on 25th January, just about over a miserable cold that had hung on me for most of the month. There were plenty of mullet present but they seemed to be in two or three big shoals way out in the middle of the pool - I'd see them occasionally boiling the surface when a bird flew over and spooked them.

I fished from the same area as last time and cast both leger rigs out as far as possible, which was still well short of where they needed to be. It proved quite a wait before (I guess) one of the shoals edged my way a couple of hours after starting. My left-hand rod nodded then pulled over, and soon I was involved in a feisty scrap with a decent mullet ... and while that was on, my right hand rod pulled over too and line started stripping off against the drag! I got the first fish in fairly quickly, left it in the landing net in the shallows then went to the other rod. This felt a better fish and it was miles out by now, though fortunately it didn't seem to have found any of the many snags out there. The mullet came back very grudgingly but I did eventually get it in to complete my second brace of the year already ... 3lb 5oz and 5lbs exact.

Later on I added a 4:14 from that swim and a lovely plump 5:02 to finish after I'd moved over to target a couple of fish I could see rising occasionally in the tail of the flow out from the lagoon. 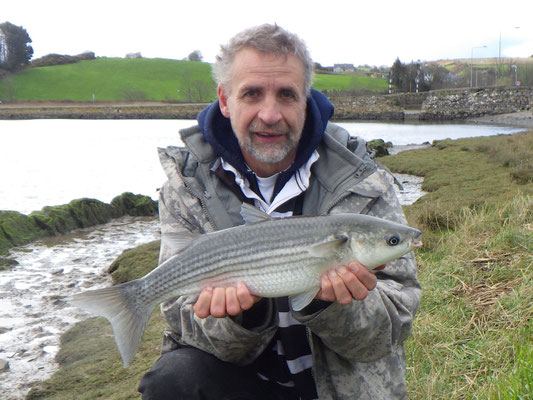 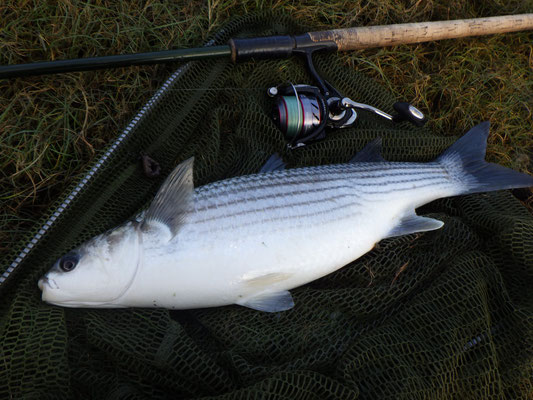 It had turned into my most productive ever January session and boded well for a February mullet.

I headed down again on 2nd February. It was a cold morning: -3 degC and I had to scrape the frost off the car. The temperature only clawed its way up to 0 degC in a couple of spots on the way to Rosscarbery. Even so, I wasn't expecting to find a thin layer of cat ice over much of the pool when I arrived ... 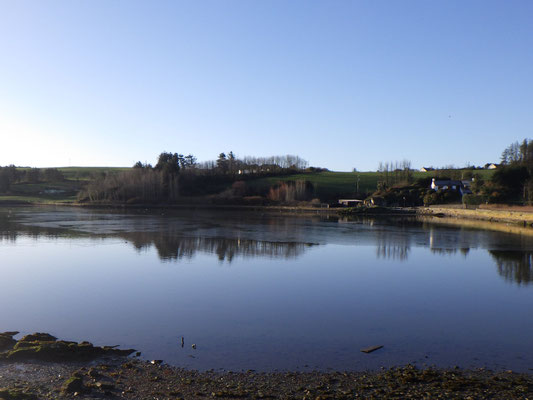 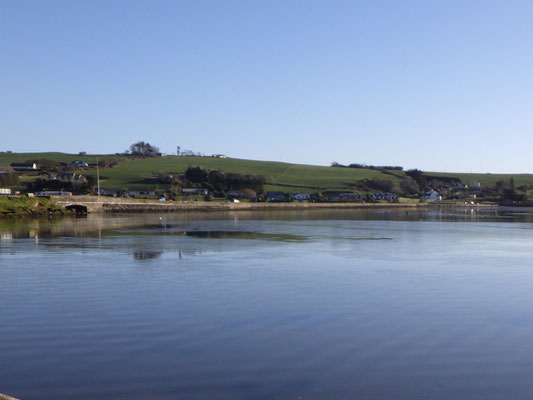 It looked lovely but there wasn't a sign of a mullet. I explored lower down the estuary and down on to the beach - still nothing. I went back up to the top to find Jason just setting up to fish with a friend. The sun and a slight breeze had broken up the ice but it looked pretty hopeless to me. I decided to head back home to watch the rugby! Probably the right choice as I later found the other pair had blanked without even seeing a fish.

More brassy cold weather and then Storm Erik followed. I eventually got back today on the 11th, with Sylvi and our collie puppy. It was flat calm when we arrived and, disappointingly, again there were no clear signs of mullet present. We gave the pup a good run on the beach, had a picnic in the car then finally I rolled out to fish a while by the bridge arch just in case there were some fish in the deeper water there.

Ninety minutes later I'd not had a bite, and the brief excitement of bumping a fish as I'd wound in had long passed. I was on the verge of giving up when I heard a splashing sound, looked across to my right and the whole corner of the pool there frothed with mullet for a few seconds after something had spooked them. There must have been thousands of fish in the shoal. I don't know if they'd been there all along or if they'd just swum in - either way, they'd done remarkably well to stay undetected given the water was eighteen inches deep, if that.

By the time I'd moved over, the fish had "gone" again but I thought maybe they were still there just lying doggo. My first casts passed without incident, but a couple of minutes into the next my right-hand tip nodded and I struck into a mullet. It came in relatively easily and I was just netting it when I saw my other rod pulling over out of the corner of my eye. I left the first mullet in the net and grabbed the other rod - a better scrap this time but five minutes or so later I beached the fish in the shallows. Incredibly I had my third one-on-each-rod brace in three trips this year!

Sylvi arrived back from walking the dog just in time to see me land the second fish and take the photo. They weren't monsters at 3:05 and 3:14 but I was very happy to catch them as that was now a mullet capture in every month since March 2018, only the second time I've ever managed twelve consecutive months.