Season's Greetings ... and a little update

Apologies to my regular readers for the lack of new material over the last couple of months.

I'd planned to have a good few rock sessions through the early autumn but it certainly didn't work out that way. First time out on the rocks and I somehow injured my back. I'm not even sure how, I had a few chucks with mackerel feathers to no avail then sat down on the rock ledge dangling a float close in for wrasse. Had a couple of small ones out then realised I couldn't stand up! Eventually I managed to get onto all-fours and scrabble my kit together and crawl off the rocks. Then I hobbled my way back to the car using my net handle and a rod butt-section as makeshift crutches. Not recommended.

I wasn't able to do much at all for a couple of weeks, and unfortunately the worst of this coincided with my friends Pete Bluett's and Jenny Kent's annual holiday in Rosscarbery.

They had a decent week over, especially Pete who had six mullet on or over the Irish specimen weight of 5lbs and several other good fish, most on leger and some on float. Jenny less so, but she also had a five pounder. Pete has written up their week over with a guest blog here.

Sylvi drove me down to Rosscarbery to see them on the Sunday afternoon of their stay. I even managed to stand and float-fish the lagoon for ninety minutes or so, but casting and striking were agony so it was probably just as well all I managed to hook was a very small golden grey. Pete had a very small thicklip about the same time.

We decamped to the Abbey Bar for the evening and enjoyed a nice meal in good company so all was not lost. 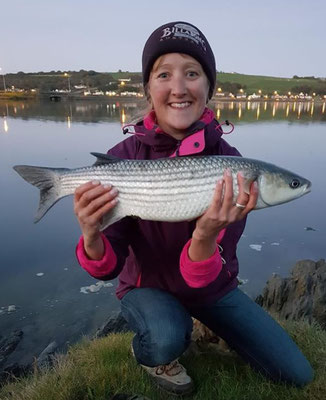 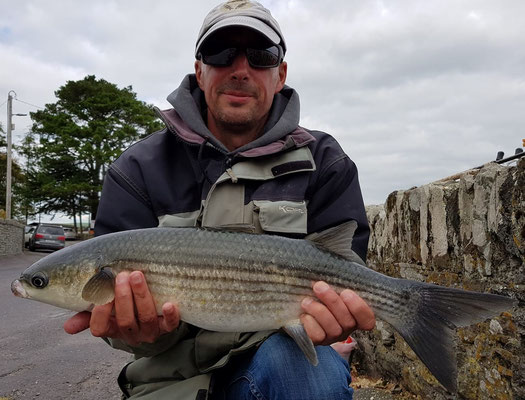 I kept as active as I could but it was a couple of weeks before I felt up to fishing again and then definitely not from the rocks. I headed down to Rosscarbery and fished from the wall so I could pull the car up close and didn't have to heave a rucksack of kit anywhere. It was still uncomfortable getting up out of my chair but I could cast okay and felt I was fishing fairly effectively. First time out for just a short session, I was pleased to get this 4:06 on leger. Still a bit painful crouching down for the photo as you can see in my face ...

Next time I stayed a bit longer. There were lots of scrape marks close in but by the time I was there the mullet were a good way out so I legered again and had two nice fish on pop-up crust, 3:11 and 5:02 ... 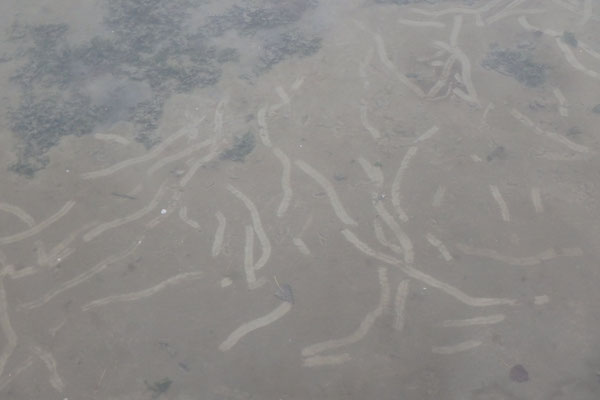 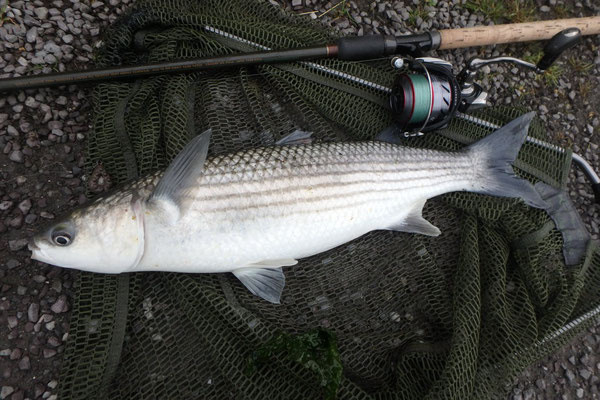 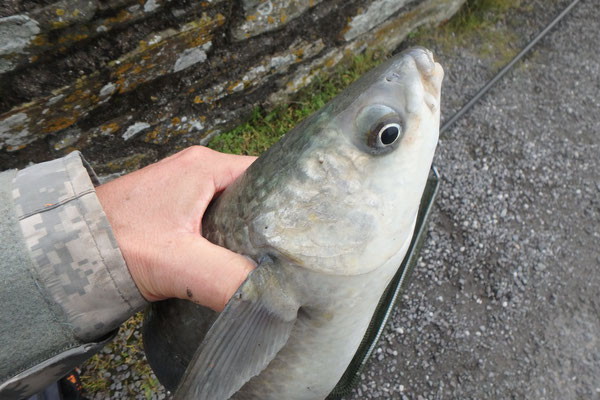 Next time, another brace, both big four pounders. The second one had a healing wound underneath, possibly from a lamprey or possibly an otter bite, any other opinions welcome. It was nice to see Jonny down again - in the customary West Cork weather for you! 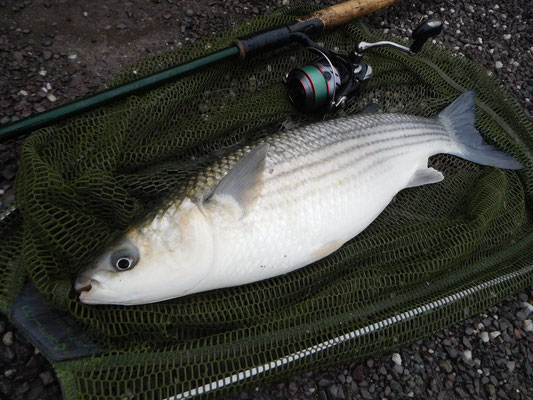 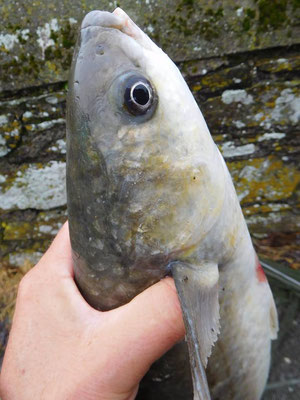 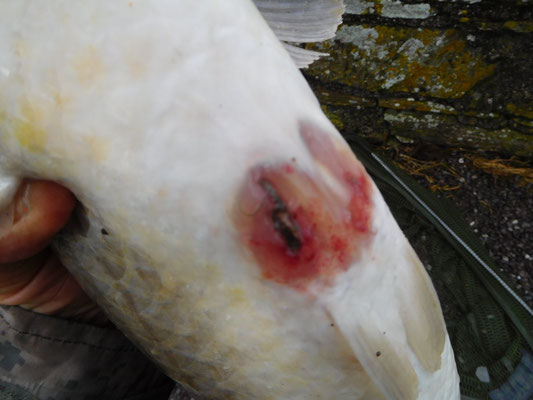 A couple of days later I was off to the UK for meetings in Cambridge ahead of several weeks of exam work once back home. As the last couple of years I had a few days down on the south coast between the various sets of meetings. This time I decided not to take my fishing kit and the weather was so bleak while I was down I didn't regret that choice at all. However, it left me needing a November mullet once I got home to keep an unbroken sequence going of every month since March.

I managed to sneak a few hours out from the exam marking on the 16th, a dismal day with wind and rain forecast later. I headed back to Rosscarbery.

I had a good look round but the only fish I could find were right in the NW corner in the outflow from a little sluice gate, apparently feeding from and near the surface though it wasn't clear on what.

I set up my float gear and fished a flake bait among the turning and flanking mullet. A couple had a look but no takes, so I changed to floating crust. Again there was a bit of interest but no definite takes. The mullet still seemed to be taking something off the surface though so I tried smaller and smaller morsels of crust.

Then my rod suddenly pulled round in my hand as the bait neared the tail of the trot. Fish on, but then off again almost in the same instant. A few minutes later I was into another one, this time taken closer to the wall so I got a good firm strike despite the breeze that had sprung up to put an awkward bow in the line. Not a massive fish at around 3lbs but it was a November mullet so I was happy.

There were spots of rain in the air by now and the breeze was freshening by the minute. I got myself set up under the brolly nearby and spent the rest of the session legering. It was generally slow but I had two good pulls and landed two further mullet about the same size. As with the last couple of winters, the smaller mullet appear to have arrived at Rosscarbery having been conspicuous by their absence throughout the summer. 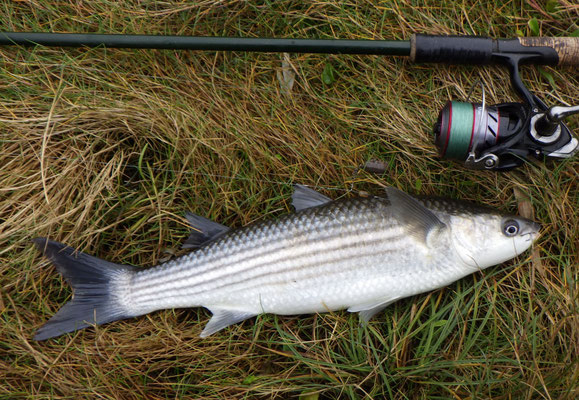 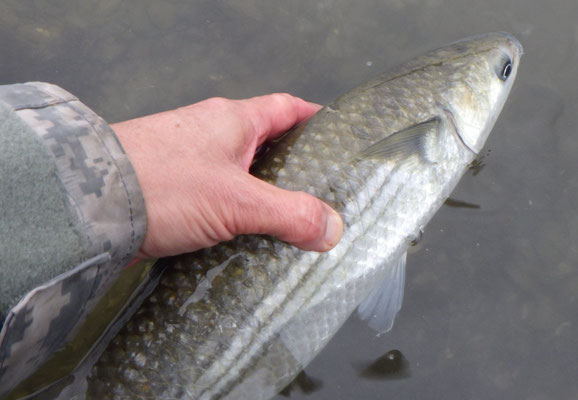 There's been some good mulleting at Rosscarbery the past couple of Decembers, but this year was set to be a struggle.

I didn't finish my exam work till the 10th, and this new and very cute arrival in our household was proving very time consuming. The weather took a turn for the worse as I finished marking, with a series of gales and lots of rain.

I ventured down to Rosscarbery on the morning of the 14th in a brief weather window. It was near the top of a biggish tide, there was a good chop on in a stiff SE breeze and the water was very coloured I guessed from a combination of the wave action and rain over the previous few days. I managed to fish about three hours as the weather gradually deteriorated, eventually packing up in lashing rain before the brolly could blow away. I hadn't had a bite nor seen sign of a mullet.

Another storm over the weekend then I picked today as the best of a bad bunch this week, very much last chance for a December mullet as we are off on our Christmas break tomorrow. I arrived at Rosscarbery to be greeted by a stiff westerly breeze and an unpromising air temperature of 8 celsius. The water however was lower and a good deal clearer than last week, and I immediately saw one or two mullet moving in the most sheltered water close to the wall on the west bank. I had a look around a few other spots but didn't see any others, so I settled down to try for the fish I'd seen with fingers crossed they'd be feeding well since there didn't seem to be that many of them.

I fished pop-up crust on leger on both rods, one close in and the other well out. The swans were a bit of a pain but periodically they moved off so I could fish reasonably effectively. After about an hour, the close in line dropped slack without warning and to my surprise the end tackle seemed to have been cut off - I can only think a big crab crawled onto the line and nipped it. I set that up again and a few minutes later I had a sharp pull on the same rod, and a whelm as a mullet spooked off, probably it had just swum into the line. While I was winding that in, the distance rod pulled over. The fight was quite sullen at first but better close in, and after five minutes or so I netted a nice 3:15 - December mullet achieved.

A quiet couple of hours followed, even fewer mullet showing than earlier and the swans to and fro making a nuisance of themselves. I sat out a couple of squalls but when some more persistent rain set in I decided to call it last cast and left both rods fishing while I packed up. When I came to wind in the close-in rod, the line was slack again. This time I wound down and contacted a decent mullet that had self-hooked. This one was a much livelier fight all round, and a bit bigger at 4:07. 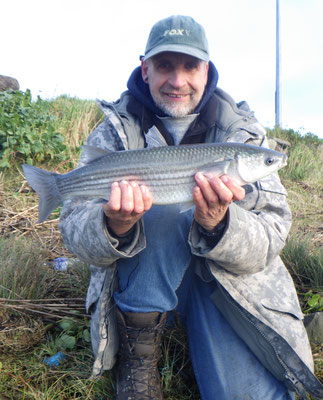 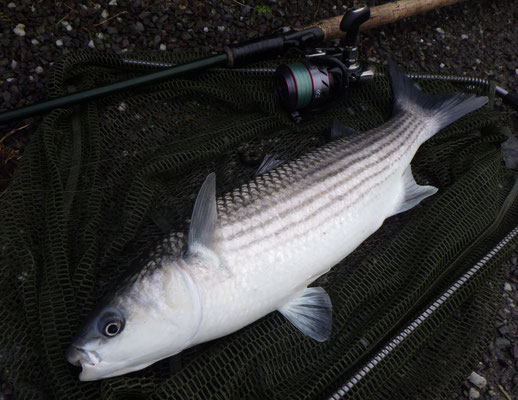 Anyway, greetings of the season to all my readers and I hope to be back with further reports before too long in the New Year.