With Steve and Just After

Last Tuesday I met Steve Smith at Cork Airport for his second trip over this year.

Best laid plans and all ... Steve's flight was delayed and an already tight schedule to fish a low-water pool in an estuary not too far from the Airport became even tighter. We were heartened to find some good numbers of mullet on arrival, and even more heartened when they showed interest in the scraps of floating bread we put in. But by the time we were set up and fishing, the first of the tide was beginning to push through the pool, and soon it became a torrent, taking the mullet with it upriver.

No matter, I had a Plan B, the pontoon mentioned at the end of my previous blog article that was vaguely on the way home, we couldn't fail to find mullet there and as it was in a blind creek the massive spring tide wouldn't bother us.

An hour later we were there ... but the pontoon wasn't, removed for the winter in the first week of September!

Instead we fished a nearby inlet. We saw a few smallish mullet and had plenty of bites, but as far as we could tell these all came from what must have been a huge shoal of baby gilthead bream. We packed up at five-all. I'd never caught a gilthead before so I had a PB of sorts, I must admit though I was hoping for a bigger one to start.

On Wednesday morning we headed out early to catch the morning HW on the beautiful Lough Hyne. It was a lovely morning but there was a disappointing lack of surface mullet activity. In fact the only surface activity seemed to come from a seal who I suspect has more than a little to do with why the mullet population of the Lough has been making itself scarce on my last few visits.

The seal moved on and eventually a small shoal of small mullet turned up. Steve managed to open his account ... it really was a small fish though of around a pound weight. There didn't seem much prospect of catching further so we headed for breakfast in the Church Restaurant in Skibbereen, and then on to the rocks in Bantry Bay.

We float-fished the last couple of hours of the dropping tide, and in the calm, sunny conditions we could easily see when mullet came into our swim. Steve added a couple more to his tally, one on a salmon strip and one on bread, a bit bigger but still struggling to break 2lbs. 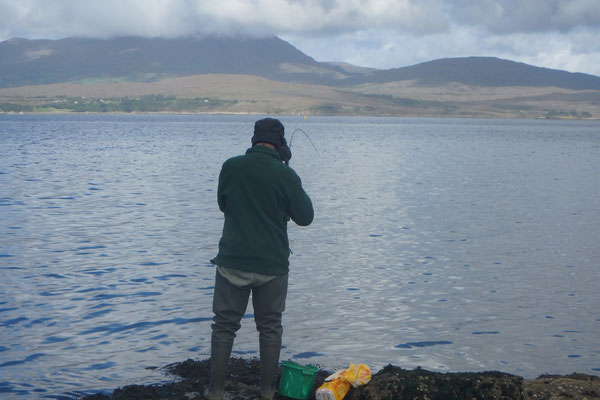 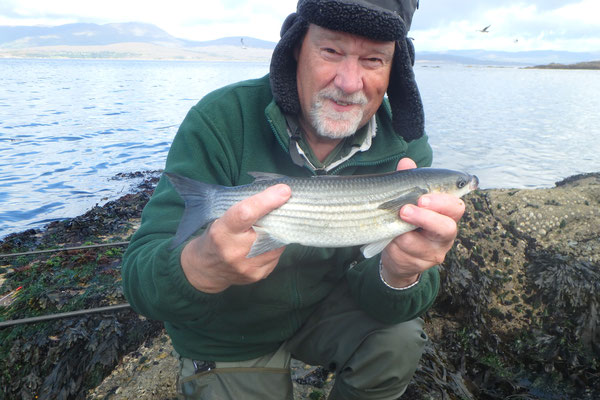 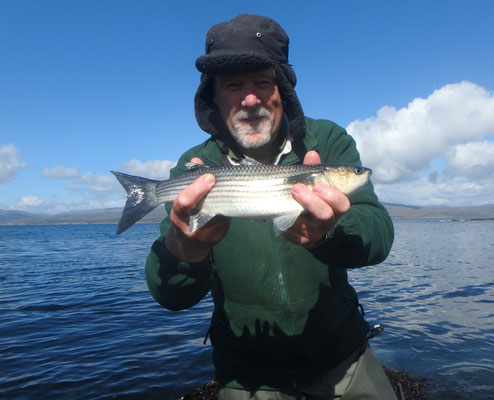 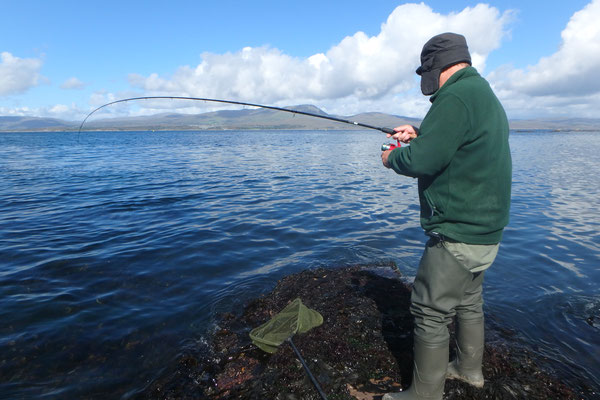 The mulleting seemed like hard work so after a quick bite for lunch we went out on the rocks in Dunmanus Bay. Steve had some fun with wrasse on float-fished limpet bait. I failed to catch a pollack big enough for dinner but had a string of smaller fish to around 2lbs. 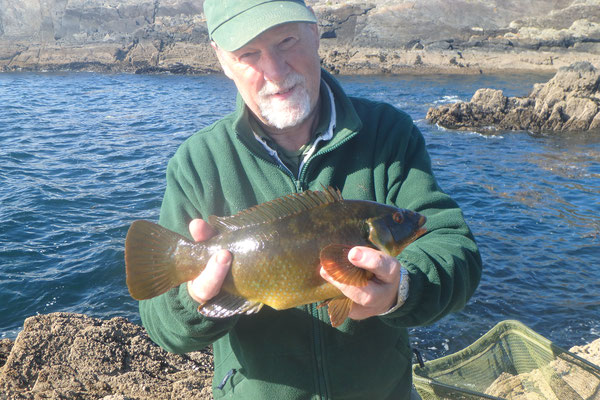 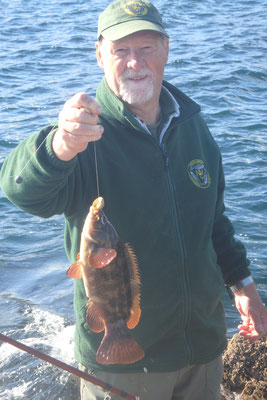 On Thursday we headed down to Rosscarbery to fish with Eddie Baker. Eddie had just lost a fish on float from the wall when we arrived. Steve joined him floatfishing, but as high tide had passed and the water would be dropping away quickly, I went over to the grassy area and set up my leger rods.

It was quiet on all fronts for a couple of hours, but not long after Steve and Eddie had packed up on the float and come over to me, I had a good take on my right hand rod.

Eddie took photos as Steve got the net ready, and after a very hard fight, including a nail-biting couple of minutes with it under my rod tip close to the rocks in front of the bridge arch, I landed a decent thicklip of 4lb 12oz. I think we all thought it would go bigger during the protracted scrap.

Eddie invited us up for a cuppa but it seemed easier to stay on and mind the gear while Steve joined him & Suzanne in their rented cottage. The fishing went quiet again but no sooner had they come back than my left hand rod pulled over and I landed a 4lb 1oz fish. 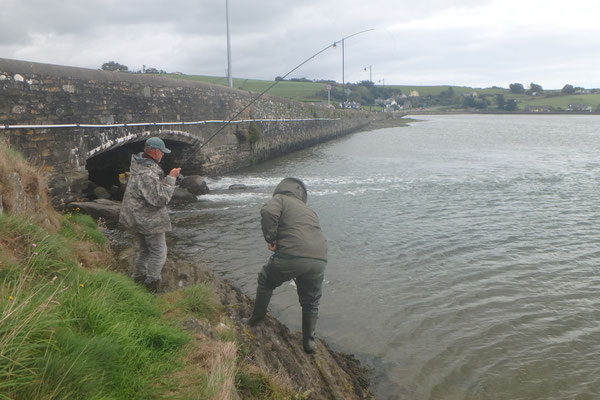 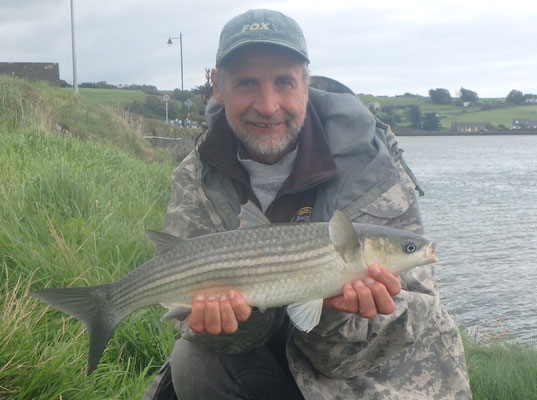 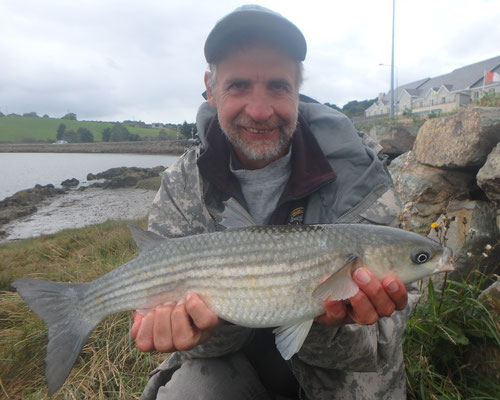 Eddie went off to leger from the wall where he missed a couple of good takes. Steve fished with me off the grass but unfortunately didn't get a touch all afternoon. It was indeed quiet but I had a good pull just as we were discussing packing up. It felt bigger than the other two fish and was running out line well when the hook came out. We fished on another hour in response to that, but to no avail.

Friday, and a bit of a road trip after waiting for the worst of the rain to clear. We fished an hour or so on the dropping tide from the pier at Ahakista, but didn't even see a mullet. Then on to the Bantry Bay rocks. A mullet swirled encouragingly just after we arrived ... and that was the last we saw of it ... another blank. And so on to fish a tidal pond north of Bantry.

We weren't long after low water. We could see several decent mullet bow-waving around in the shallows mostly across the far side of the pond. We went for a soup and a Guinness then returned. The pond still hadn't started to fill. Steve made the slightly perilous journey round the steeply sloping bank to get closer to the main group of mullet, and did well to have two of them out, 3lb 12oz and 3lb 7oz. He was floatfishing, laying the bait on the bottom in only about eighteen inches of water. 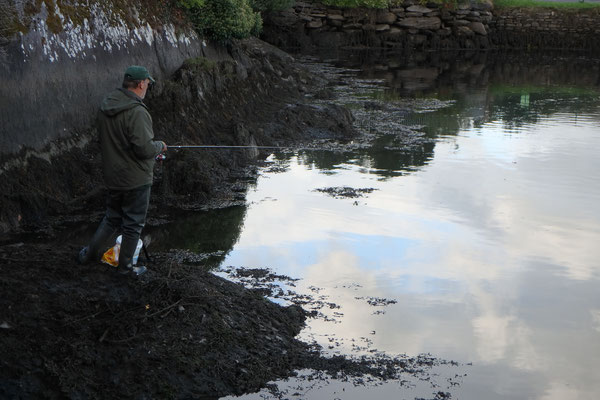 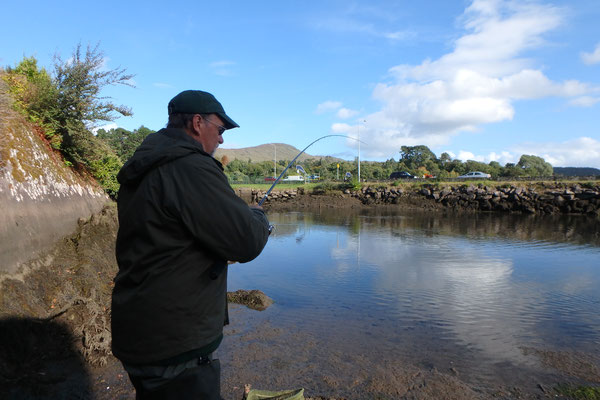 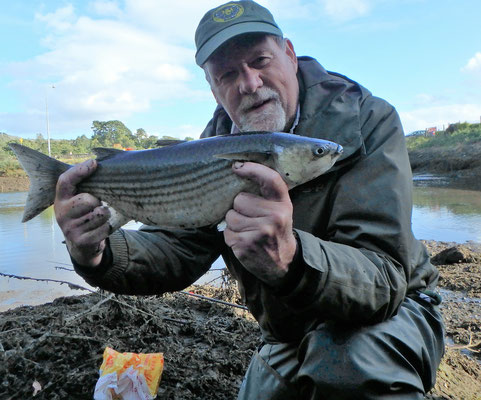 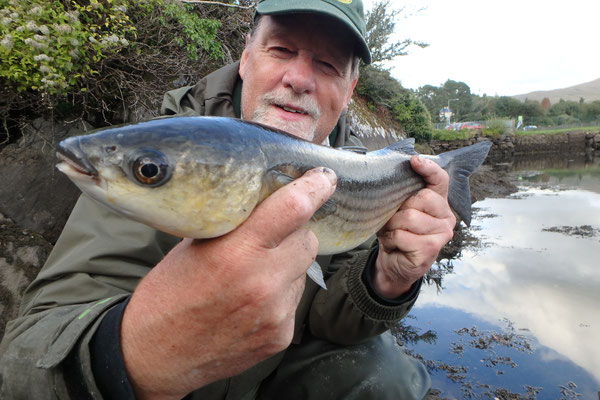 The fishing petered out after that, probably down to the disturbance of playing and returning the fish in such a small environment. No worry though, job done.

The forecast for Saturday was very poor after lunch. We settled for a morning session from the rocks for mackerel and pollack, then a chill-out afternoon.

The rocks proved disappointing, just one mackerel for me (first cast!) on sabikis, and a couple of small pollack for Steve on float with sandeel bait. We decided on a relocation to one of the local piers, where the fishing proved scarcely better. I eventually added another mackerel to the tally, so at least we had lunch, and Steve had a small pollack then missed a string of bites which could have been more small pollack or mackerel. Eventually he hooked a half-decent pollack float-spinning the sandeel bait. We took it home for a dinner of pollack goujons and chips.

Very few fish were showing in bright conditions with a touch of chilly north-west breeze, and those we could see topping were mainly well out of range. Steve and I decided on a move to the pontoon mark where I'd fished with Mick Buckley earlier in the summer.

I suppose predictably, no sooner had we hit the N71 than Eddie hit a big slack-line bite and landed a chunky 5lb 5oz thicklip.

Meanwhile we arrived at the pontoon to find a number of chunky mullet in residence and moving around quite actively. Steve set up about half way down the pontoon and I stayed at the near end. Within a few minutes, I was lucky enough to have four fish taking my loose feed off the surface and as it sank. I missed four or five really positive bites before finally latching into one on breadflake fished about eighteen inches deep hard up against the side of a dinghy that was tied to the pontoon. At 3lb 1oz I'm pretty sure it was the smallest of the four fish.

Unsurprisingly my swim went quiet after that. Steve had been seeing fish but these also melted away as we lost the last of the ebb flow.

Perhaps we should have waited for the flood but Steve was keen to have a go in the low water pool where we'd failed on Tuesday afternoon, so we relocated again.

There were a few mullet showing although not as many as Tuesday. I fished from a short section of rock armour between a pontoon and the road bridge over the pool and soon hooked a small thicklip fishing close in to the rocks. Improvised photo from the pontoon - sorry - it was only about a pound and a half! Sadly Steve missed the few half-hearted bites he had just the other side of the bridge so finished blank. We returned to Rosscarbery for a nice meal in the Abbey Bar with Eddie & Suzanne and my wife Sylvi who had driven down.

I dropped Steve off at the Airport early the next morning and headed home by the coast road. I stopped at the pontoon mark where we'd seen the big fish yesterday but nothing was showing over the high water. I moved on to Rosscarbery and was greeted by a heavy overcast threatening rain and a lovely warm southerly wind as the front edge of Storm Helene approached. The lop had coloured up the water a little. I've caught well in these conditions before so despite yesterday's struggle my confidence soared.

A couple of hours passed without event apart from a visit by Eddie & Suzanne. Eddie had fished that morning and had a 4lber, but wasn't fishing this afternoon given the weather forecast. Still I thought it was actually quite pleasant fishing from the shelter of my brolly, and quite easy fishing straight down the freshening wind.

My right tip nodded a couple of times, and I struck into a powerful fish ... 5lb 2oz. Next cast I had a little drop back bite on my left tip, nothing there when I struck but I was ready for a repeat performance next cast ... 5lb exactly. That fish was followed around by three of its shoal mates as I played it. Maybe they were all spooked or just went off somewhere else, but everything was quiet for the next hour or so. Then another little drop back missed just as I was thinking of packing up. I gave it another cast and started tidying my kit up, and a minute or two later my left tip pulled over. It was the best fight of the three and the biggest fish of the three ... 5lb 12oz. 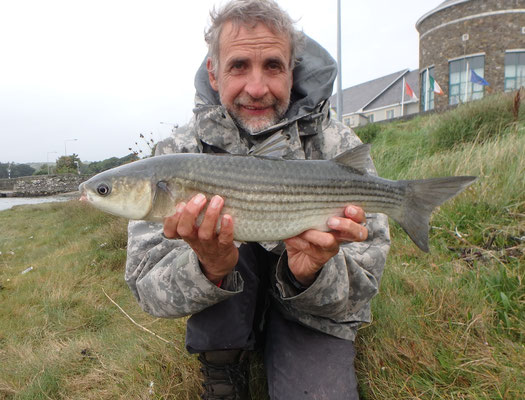 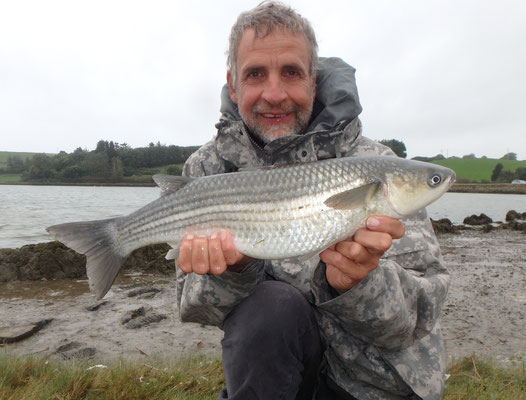 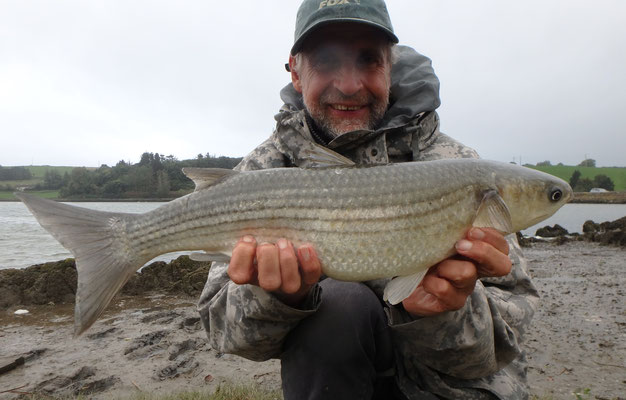 What a wonderful session; tinged only with the slight regret that the weather change that had triggered it hadn't come a day earlier for Steve to benefit.