Later in July Mick Buckley moved up from his digs in Skibbereen to spend a few days with us on the Sheep's Head.

Mullet-wise we did several short sessions from the rocks in Bantry Bay over the morning and evening low waters in conditions that were generally a little sloppier than ideal.

Mullet weren't all that abundant but turned up most days, mostly smallish fish around 2lbs and up to around 3lbs, but still good fun to catch as these open-water fish always seem to punch above their weight.

A typical scrap would go on for five or six minutes and produce several anxious moments with the rocks and kelp.

The mullet seemed obsessed with surface feeding despite the often choppy conditions, and we had some on floating crust, others on sub-surface baits fished shallow, including bread flake, mackerel, salmon, pollack flesh & liver and raw prawn. Anything fished more than about eighteen inches deep was generally ignored by the mullet and would be taken sooner or later by a small pollack or coalfish. 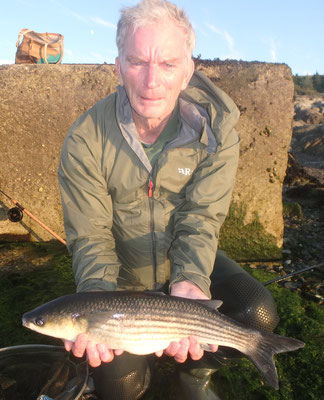 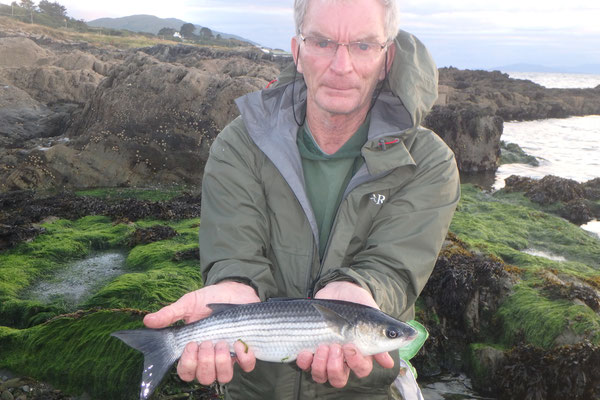 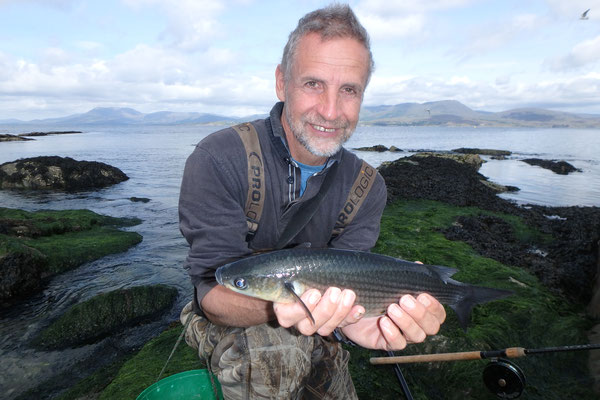 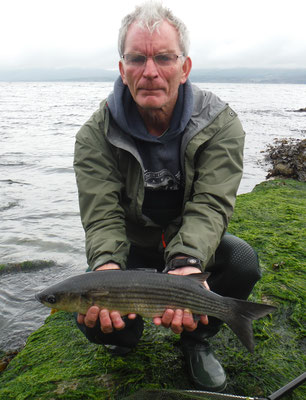 Over one high water we located hundreds of mullet in a shallow corner of Dunmanus Bay. It made for an exciting couple of hours with fish swimming all round us - but ultimately we were unsuccessful as they mostly ignored our baits. Mick had a few instances where fish swam into his line and his float sped away, but he thought no real bites. I fished out a little deeper and did eventually get a little spell of three or four proper takes, frustratingly all missed.

We were all psyched up for a return next day,

but the weather had other ideas with a blustery wind and heavy showers. As we waded out it was clear that only a tiny fraction of yesterday's fish were present and after three-quarters of an hour without a bite we gave them best.

We moved instead to a more sheltered bay near Kilcrohane and, finding very few fish present there either, eventually we moved to the tidal lake behind the strand.

This is a somewhat enigmatic venue. Several people have told me about shoals of large mullet in there, most recently my wife Sylvi who came across a big shoal of mullet "with fins like sharks" while walking the dog down there in June when I was away in UK. But all I ever seem to find is modest numbers of mullet around a pound weight and/or just a handful of very spooky individuals of a couple of pounds that bow-wave out from the edge as you get near them.

Anyway, there wasn't much else on offer today so Mick and I decided to give it a go. Astonishingly, my float had barely settled on my first cast after wading out before it plunged under! It was this little blighter - one of those smaller fish but at least it gives me hope the larger ones may prove catchable if they ever grace me with their presence.

Heavy rain was forecast for most of Mick's last day with us. We decided to head for Rosscarbery where we'd be able to fish from the back of the car once the rain set in.

The water was already well down when we arrived, and we could see fair numbers of fish along the west side of the estuary. Not unusually for this year, they proved to be in a difficult mood, swimming around and over our leger baits but showing little interest.

At least when my rod finally pulled over it was a fish worth waiting for - this lovely 5lb 5oz thicklip that put up a great fight in the shallow water.

The first drops of rain fell as I was playing the fish, and soon it was pouring. I've had some great sessions in the rain at Rosscarbery but today the mullet seemed to just melt away and after an hour of getting wetter and no further bites, we decided to have a break. We went for a cuppa in the activity centre cafe by the lagoon hoping the rain would ease but it just got heavier and heavier while we were in there and eventually we headed home.

I was back at Rosscarbery a week later, after a trip to UK for a couple of days' work, extended by a night after Ryanair cancelled my flight home. It was a warm, still day and though I could see odd mullet topping I guessed they might prove difficult to tempt, again. Sure enough, my leger baits remained untouched for the thick end of four hours, and it wasn't until a breeze sprang up mid-afternoon to ripple the surface that the mullet decided to feed. In the next hour I had three out, in order 4:13, another 5:05 and 4:12 ... 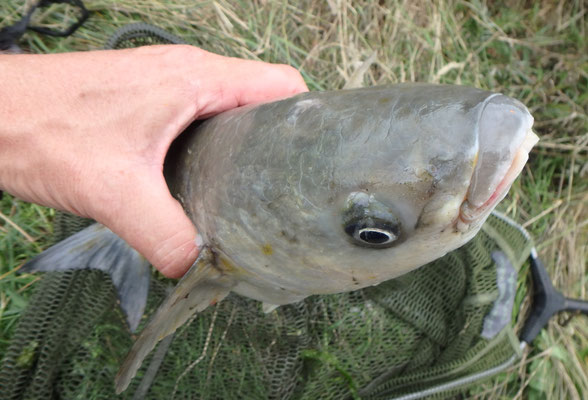 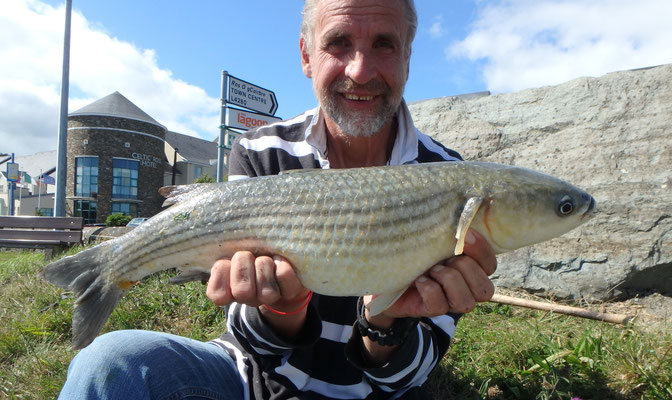 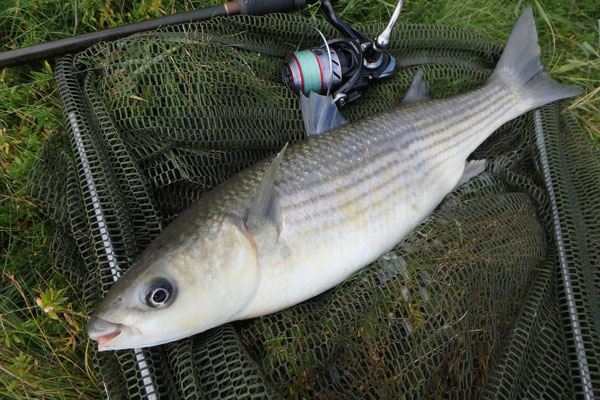 My favourite estuary on the Mizen peninsula was in poor form earlier this year, as the normally prolific spring shoals of mullet failed to show.

I took a trip down last week to leger the shallow flats over an evening spring HW. To be honest mullet still seemed in short supply, with very few showing. But I did at least get a couple of bites, both big drop backs.

The first, dead on high water, produced a lovely 4:13 thicklip. I thought it might go bigger as it tore off down the pool and hung out there for ages before weakening and kiting in to the wall to my left - still a very good fish for the venue though. The second fish was a pretty and lively 2:06 ... 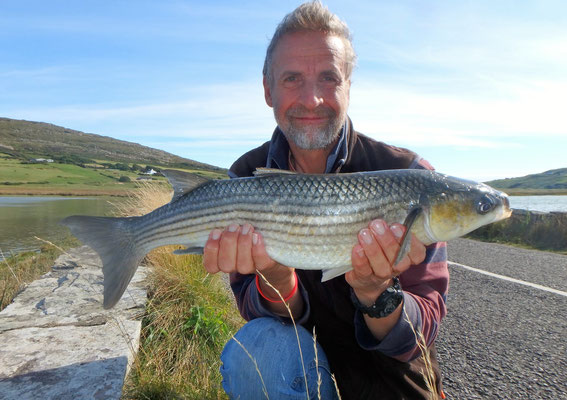 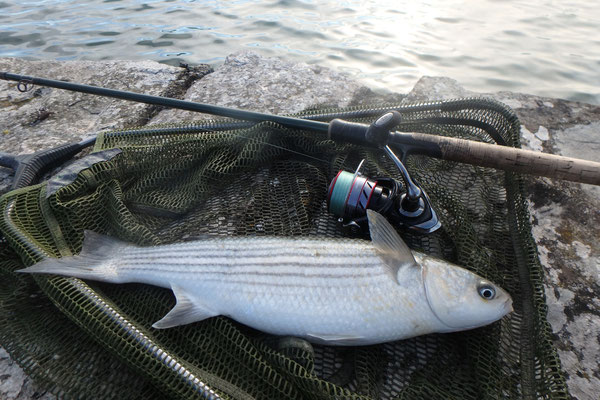 Today turned out to be a case of try, try and try again. Plan A was to floatfish Rosscarbery over the top of a big spring tide, but I failed to locate mullet in either of the two swims I tried in the estuary below the N71. I relocated across the road to the lagoon, where several herring-sized mullet were soon swirling on the surface in response to my loose-feed. I kept fishing deep in the hope there would be some bigger fish below, but I didn't score. I missed a few bites but I think they were from the small mullet.

I drove a few miles to the pontoon mark where Mick and I had enjoyed good sport last month ... but I didn't stay long. The water was much more coloured, I guess by a combination of the big tide and a stiff north-west wind blowing down the estuary. It all seemed a bit bleak with no mullet showing, so after thirty biteless minutes I moved on.

I headed for a pool further up the estuary, a mark I hadn't fished before but had been meaning to try for years.

The water was quite coloured but a few mostly smallish fish could be seen bow-waving around the pool, and some bigger ones feeding in the margins.

I went round for a chat with a young lad who was fishing from the pontoon. His tackle was a bit basic but he was getting occasional takes on floating crust and he invited me to join him.

I did get one out on crust, but it was a small one of less than a pound. There didn't seem to be much prospect of getting a bigger one there, so we moved round to the near bank. The lad missed a few takes from better fish on crust fished close to the bank. I float-fished flake a couple of feet deep and loose-fed mashed bread. I was soon getting bites and after a couple of misses I connected with one just under 2lbs. A few minutes later, having moved a little way along the bank, I was into another one of 2lb 10oz. It was a bit of a scramble down the muddy bank below the wall to net and return fish - a nice sheltered venue though and as there were some bigger fish present, one that definitely warrants another look.