Apologies to my regular readers for the lack of recent updates. I've not been fishing much - a trip away in the UK, an exceptionally busy exam work season and the World Cup footie being mostly responsible.

I did manage to get out on the last day of June for a short mullet session on the Bantry Bay rocks. I caught it just right with lots of mullet showing on a sunny day with just a touch of breeze to ripple the surface. I briefly contacted a decent fish first cast on bread bait, but after that the bites became very finnicky on bread and I couldn't hook up again. I changed to using slivers of salmon and the fish bait produced much better bites. I finished the session with three nice mullet before the rising tide forced me off the spot, the best a lovely 4lb 12 oz thicklip, the best I've had from this particular mark. 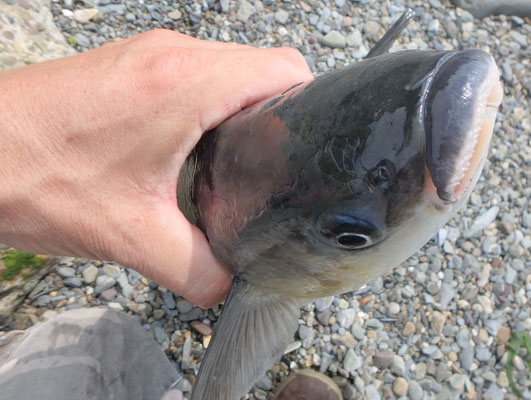 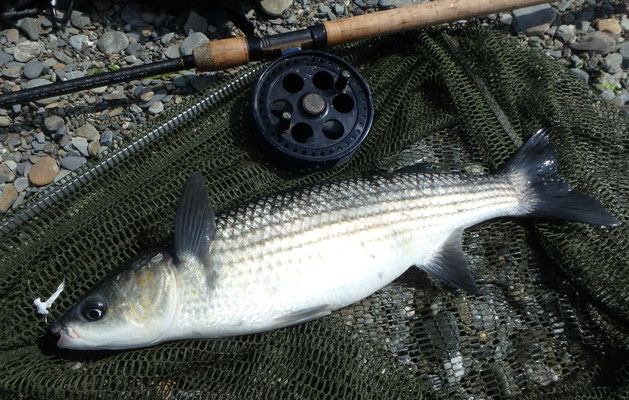 This last few days my old friend Mick Buckley has been staying down in Skibbereen and I've been down to join him on a couple of mullet sessions.

On Sunday Mick and I met at Rosscarbery about lunchtime. The tide was well out and we could immediately see a good aggregation of fish in the shallows a little way down the west side of the estuary.

We set up with two leger rods each, but it was soon apparent that the mullet weren't feeding well in the bright-light conditions. We both had line bites but it was an hour or so I had a decent pull. The fish came in quite easily at first but then put up a fantastic spirited scrap as it neared the wall, and particularly after Mick first showed it the net. After what seemed like ages later, we finally had the mullet out. It was just a quarter ounce shy of 5lbs, so it's a good job I don't get too wound up about this specimen fish thing.

Half an hour later I was in again as my rod pulled over just as I was taking up a little slack line ... I wondered whether that was a coincidence or if a slight movement of the bait induced a take? We'll never know I suppose!

This fish fought better at first but came in easier overall. It was a few ounces lighter at 4lb 7oz and had an unusual number of gold scales flecking both flanks.

And that was our lot. Although the mullet continued to cavort in the shallow water, we couldn't get another take. We hung on hoping the fresh tide would renew their interest, but instead most of them seemed to move on as the water level rose, and the session petered out.

I was back at Rosscarbery yesterday morning. On arrival I could see mullet topping everywhere in both the lagoon and the estuary, but it was shaping up to be another hot, bright sunny day  and I guessed that despite the number of fish in evidence it was going to be a struggle to catch. I set up to float-fish in the lagoon and after a quiet start, a touch of a north breeze got up to ripple the surface and I started to get bites. They were very sporadic though and not particularly decisive. I managed to miss seven or eight, bumping one fish and bringing a tiny oddly-shaped scale from around the mullet's mouth back on my hook point. Mick arrived just as the breeze was dying off and I was feeling the best chance had gone. We both missed a couple more bites on float in the lagoon, then tried legering down in the estuary with no interest in our baits at all. By early afternoon we were ready for a change.

We headed for a pontoon mark where Mick had had a couple of mullet the day before. It proved to be a good move. There must have been a good number of mullet under the pontoon, we could hear them sploshing around under our feet from time to time. Better still, with shade and cooler water and a gentle run of tide, they proved much more willing to feed than the fish at Rosscarbery.

Occasional fish would venture out on patrol, but the best way to get bites was to fish hard against the edge of the pontoon and trickle in tiny amounts of loose mashed bread around the float to bring a fish over to your bait. The bites were quite positive when they came, and then the fun would start trying to keep the mullet out in open water ... a good bit of the fight is spent with the rod tip underwater as the fish goes back under the pontoon or one of the boats moored alongside. Our luck was in today and we managed not to lose any. Centre-pin reels help a lot here, they are much, much better than a fixed spool for feeding controlled amounts of line to a running fish and then for winching that line back on to the spool. I won 5-2 on numbers, but Mick had the best of the day at 4lb 12oz. Most of the others were 2 - 3lbs.

Mick is coming to stay with us for a few days shortly to do some rock fishing around the Sheep's Head, so hopefully there'll be another blog post about that soon.