Writing these blogs it's easy to gloss over the bad days, concentrate on the good days and give a sometimes over-optimistic impression of the fishing. There's no disguising though that the last month has been difficult, and after some promising catches in March and April the mullet fishing has gone backwards. Main culprit I'm sure has been the unseasonal weather. Two early heatwaves have come and gone in the UK and the east of Ireland, while West Cork has languished under a blanket of cloud and mist with temperatures struggling to get into the teens of Celsius and some days much colder than that!

My banker early-season spot on the Mizen peninsula has properly let me down this year, with several trips finding the place devoid of mullet. Maybe I was unlucky on the days I chose because, judging by the piles of scales I found on the bank, the otters seemed to have been getting a few. But overall the mullet definitely haven't been in the estuary in anything like the numbers or with the consistency they have been in the previous springtimes I've fished. After several blank trips I did eventually bag one lonely mullet, 3lb 10oz. One plus side of the quiet fishing is that I had plenty of time to clean up the rafts of plastic bottles and other unwanted flotsam that had washed up in the winter storms. 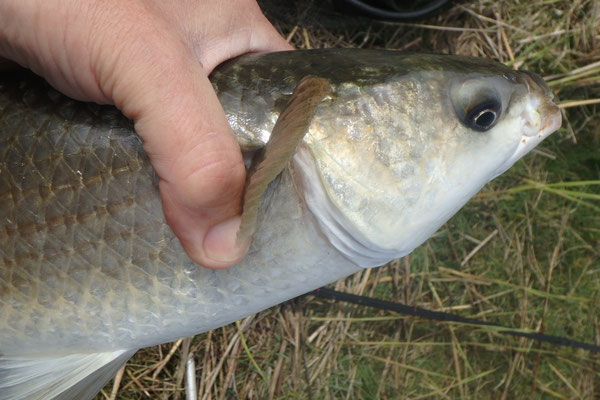 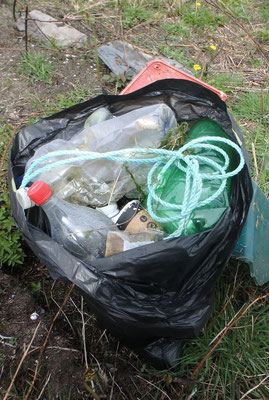 Another plus was that after packing up early most days, I also had plenty of time to recce some new marks. On one of these I found a group of mullet in shallow water in a tiny stream running down to a harbour. The biggest of them were probably about 4lbs.

It was too shallow to float-fish conventionally and I didn't have my leger gear with me, so I fished floating crust. That day they didn't start showing any interest till the tide was ebbing and the mullet were gradually dropping back towards the harbour. I missed a couple of takes and blanked. The next day I was back about an hour before high water on a slightly bigger tide. The mullet were there again and today they were straight onto the loose crusts I fed in. They were wary of my hook-bait though. Several times fish came up to the crust and nudged it before turning away ... then one turned back and took the crust as it sank. All hell broke loose in the shallow water, and after a brief but exciting fight I landed a mullet just shy of 3lbs. Unsurprisingly after that there was no sign of its shoal mates so I didn't fish any longer.

I struggled to find mullet near to home, blanking a couple of times from the rocks in Bantry Bay apart from several coalfish about a pound that took the bread baits, perhaps a sign the water is still on the cold side. In the absence of much going on this end, I kept doing the drive down to Rosscarbery to keep the mullet-count ticking over, but even there things were getting difficult.

18th April was a miserable grey day with a stiff south-east breeze putting a good lop on and colouring up the water. I fished blind on the leger in a couple of swims but couldn't buy a bite. After four hours I was tired of that and relocated to floatfish the lagoon. It was choppy and murky and I wasn't optimistic, but I had one bite and landed a mullet of 2lb 8oz ... 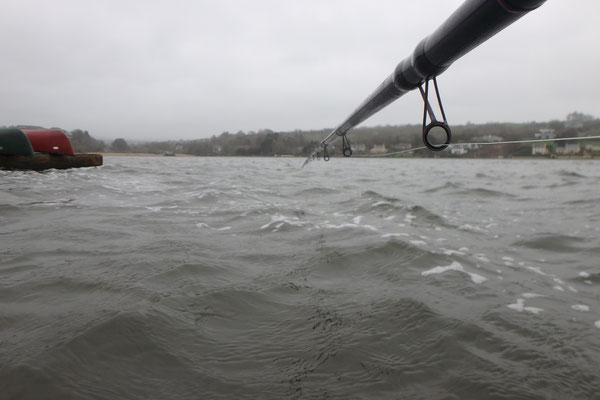 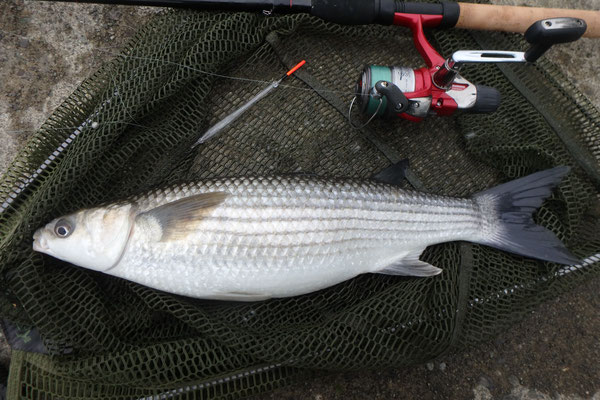 I was back on the 24th on a smaller tide, and with the water shallower I could see mullet moving in front of the grass by the bridge arch, not huge numbers but plenty enough and I was surprised when after two hours I hadn't had a touch from them. I moved down the west side and endured another hour on tenterhooks with mullet swimming all round my baits without taking. Then for no obvious reason they turned on and I had three bites in half an hour. The first fish came off but I had a brace out just either side of 3lbs. Then they turned off again and that was that! 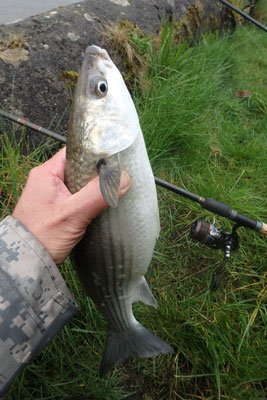 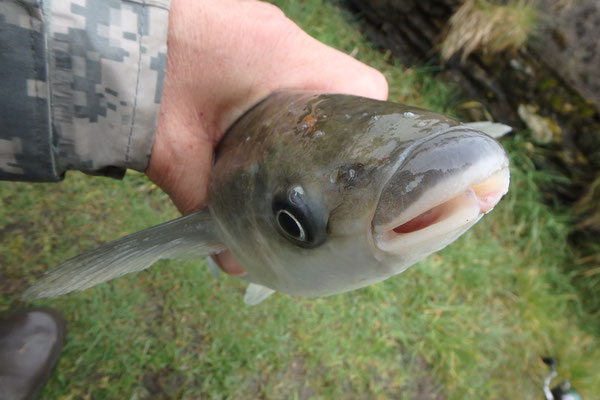 Into May and on the 3rd I was back at Rosscarbery with Julian. We barely saw a fish and didn't get a bite. Today we were back, mostly on the basis it couldn't get any worse. At least we had some rare West Cork sunshine, but the very neap tide and a strong westerly side-wind made fishing difficult.

We weren't seeing much by way of signs of fish but half an hour into the session, my right hand tip nodded and I sruck into a decent mullet. It gave a good account of itself before Julian could net it, 4lbs on the dot. Much later, off to my right, Julian grabbed his rod as he thought the wind was sliding it out of his rest, and found himself attached to a mullet. It was 2lb 8oz, and I'm glad he'd caught one after fishing hard on a difficult day. 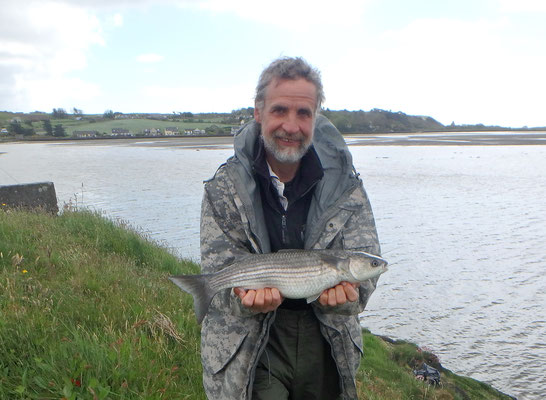 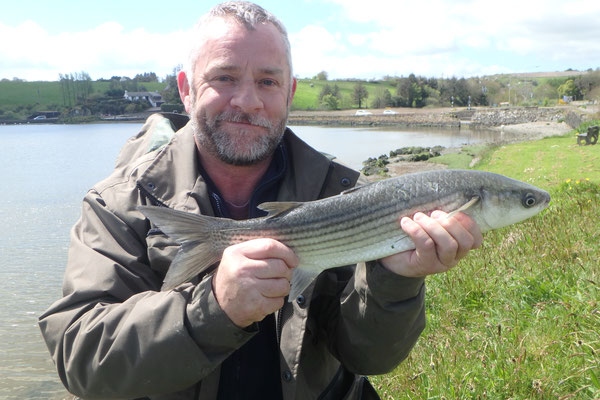 To my left I had this guy for company much of the session. He seemed to be catching more than we were, but not as big ...