February mullet fishing proved difficult and ultimately unsuccessful. I did a first trip to Rosscarbery on the 4th. I couldn't see any sign of mullet and ended up fishing blind in the swim where I'd caught the two fish at the end of January. Incredibly, I missed a decent pull on my very first cast! As I wound in, the thought flitted through my mind that I may have just missed my best chance of a February mullet. And how prophetic that turned out to be, as that session petered out without further interest, and three further blank sessions followed before we headed for the ferry and a long-scheduled UK trip on the 19th. That put an end to any prospect of a mullet in February, though as the Beast from the East and Storm Emma arrived shortly after and dumped a blanket of snow over West Cork, I doubt I'd have been out much anyway.

My first trip was on the 8th and there were decent numbers of fish showing out from the west bank when I arrived about lunchtime. I put out the usual two leger lines but I didn't get any definite takes, I thought slightly surprisingly given the fish seemed quite active. Eventually a sizeable group of them gathered in a shallow corner and I decided to break out the float rod. Tackled up again, I waded out a little way, crouched low and put a little Puddlechucker out into the midst of the feeding mullet, fishing a small flake bait just a few inches deep. Still bites were hard to come by, then unexpectedly the float stabbed under and I missed with the strike. But I was better prepared a minute or two later when the float dipped again and I was in ...

The fish bow-waved out through the shallow water scattering its shoal mates then put up a decent if uneventful scrap before I could beach it. It weighed 4lb 5oz. The blingy reel is the Shimano Catana that I won in the raffle drawn at the Mullet Club AGM ... it seemed churlish not to give it a whirl and in fairness it did a decent job but I don't really like rear-drags much on fixed-spool reels so it may not get a lot of other outings.

I headed back a few days later on the 11th, a mild but miserable grey day with drizzle and a southerly lop pushing up the estuary. I couldn't see anything moving off the west bank where I could have fished from the lee of the car, but when I walked along the causeway I could see mullet whelming and topping in the shallows in front of the shingle area. This would mean fishing with the weather right in my face, but nothing ventured nothing gained ... it actually turned into quite a good session with regular interest on the tips. The first fish I hooked came off, but then I landed three of 3:09. 3:07 and 4:04. 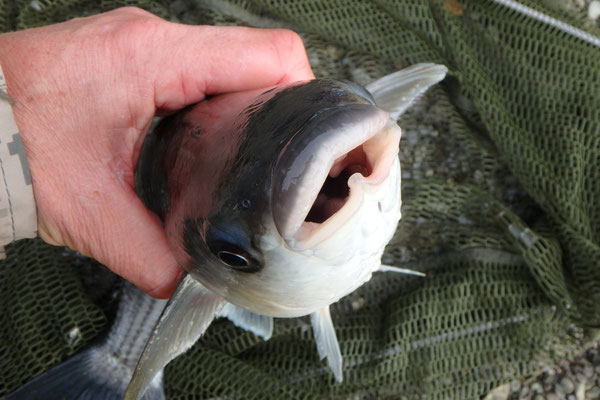 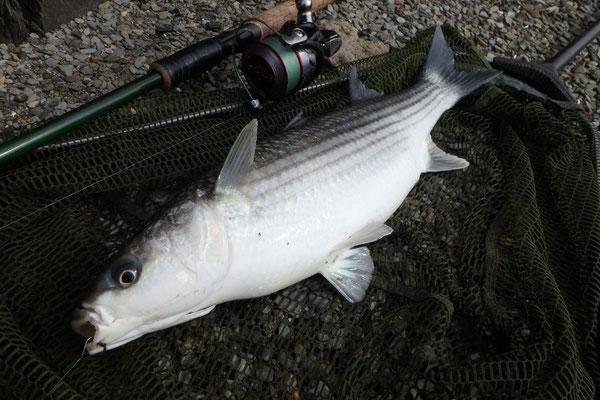 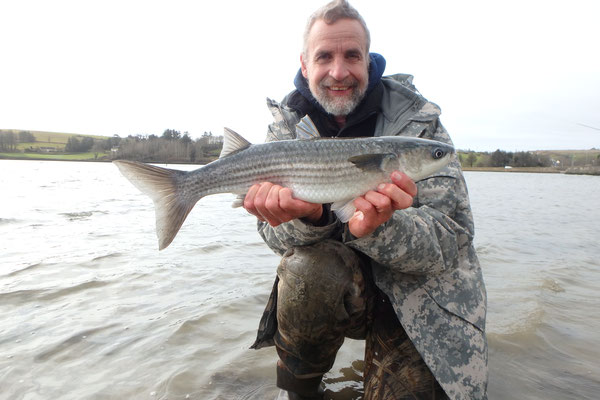 The fish moved on as the flood tide pushed into the pool from the left, and since I was happy with what I'd had I called it a day.

I was back today, a much brighter day but with a fresh and chilly SE breeze. The water was well up and I couldn't see much sign of mullet anywhere so I decided to fish on the west bank where it felt like spring tucked behind the car with the tail gate up. The mullet must have been feeling it too as despite not seeing much surface activity till the water had dropped away I had a succession of knocks and pulls on the quivertips and I landed a string of five mullet of various sizes between 1:10 and 3:07.

As the new tide pushed into the pool, the mullet seemed to go off the feed and move on. I was already starting to pack up when my left rod yanked right over and a better stamp of fish ran off line. I soon had it under control and worked it closer in to net ... no monster but at 4:01 the best fish of the day.