Slow Start (but Worth the Wait)

The storms between Christmas and New Year and on into January made for some difficult fishing.

I visited Rosscarbery on the 1st and the 10th of the month without seeing a mullet or getting a bite fishing blind. On the 10th I packed up early and had a good look round several parts of the Clonakilty estuary hoping to find some fish but to no avail there either.

After a couple of better days I was back at Rosscarbery on the 14th.

It was calm when I arrived and I could see mullet moving occasionally well out from the grass by the bridge, so I set up there and fished both leger baits as far out as I could cast.

From time to time I could see fish in the area of my baits, but they didn't show any interest in feeding on bread. After a while a breeze sprang up so I couldn't really tell if there were any mullet still about, but I fished on till the tide started to rise before deciding on a move onto the west bank which would be more sheltered.

To my surprise I saw mullet immediately, and on watching a while there seemed to be three or four small groups of fish moving around. They didn't look any great size - 2lbs tops I thought - but under the circumstances I'd have liked to have caught one. So it was disappointing when a couple of tentative knocks on the tips came to nothing.

The closest I came to seeing a mullet on the bank was this bit of otter-kill! The otters do take a few, particularly in winter when their preferred diet of large shore crabs presumably gets a bit scarcer. I enjoy seeing the otters though and don't really begrudge them the odd mullet.

After another stormy interlude I was back on the 20th ... and the mullet had evacuated the estuary again. I really wanted a January mullet but by this stage I'd have settled for anything, so on the 22nd I took the big rods down onto the local pier to see what was about.

Even this turned into a struggle, with the edible crab population turned hyperactive by the unusually coloured water. I wound in seven or eight of the things, unfortunately none quite big enough to keep. They were ruining my big fish and squid baits in next to no time but I did get two or three short but very fast runs. In the end I put on a couple of smaller baits to try to find out what was going on, and had a decent coalfish. 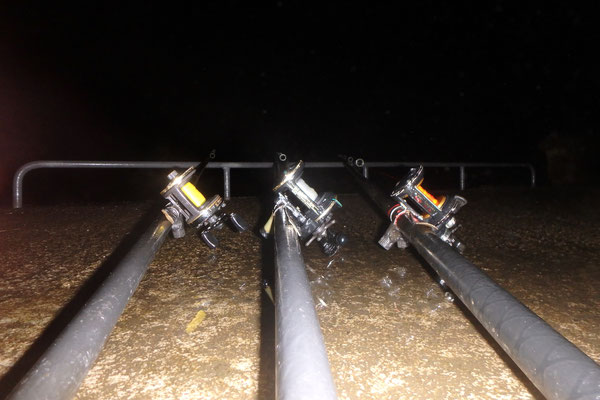 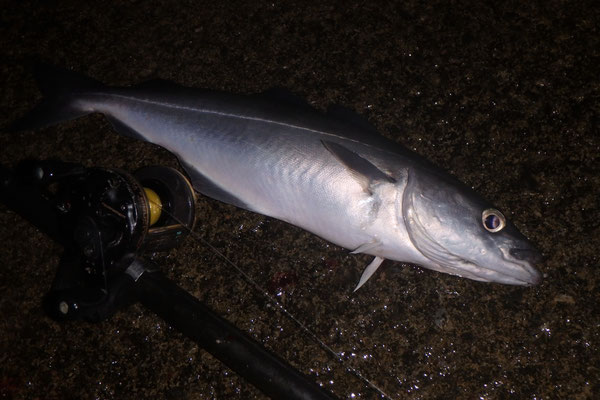 By yesterday it was reaching Last Chance Saloon time for a January mullet, and fortunately a couple of calm days were forecast ahead of the next blow. I had a good look round on arriving at Rosscarbery and although they were not plentiful, I could at least see a few mullet topping, mostly in front of the shingle below the N71 causeway.

I fetched my kit from the car, jumped down the wall and put my two pop-up crust baits out, one close in and one further out and to my right. I waited fifteen minutes, seeing fish move close to both baits but getting no takes on either, then I wound in the close-in line to rebait. I was just about to cast it again and the right-hand rod pulled round. A quick bit of rod juggling and fish on ...

What followed was fifteen minutes of fairly unspectacular fight, the fish neither running out far nor wanting to come in. A few times after I'd recovered a little line it would surge out again, not far but powerfully. I began to feel it was a decent fish, but even so I was surprised when it eventually kited into the shallows and I went to pick it up ... a real lump ... 6lb 12oz.

I was well chuffed with my second largest Irish thicklip, an old warrior that had lost most of its front dorsal fin at some stage of its life.

And yes that is calm water and blue sky in the photo ... there's been precious little of either this winter!

I fished on for another three hours in that swim but despite having mullet all round my baits from time to time, I couldn't get another take. The fish moved on as the flood tide pushed into the pool. I headed round onto the west bank and as it calmed right off into the evening I could see hundreds of mullet whelming and bow-waving in the middle of the pool ... presumably mostly new arrivals on the tide.

Every now and then a few moved into my swim, but I only had a couple of non-commital knocks on the tips. I wasn't unduly surprised, the new sea water that had flooded in felt brassy cold, and the air temperature was plummeting under the clear sky.

Today I was back again. It wasn't such a nice day with persistent drizzle and a bit of a light south-east breeze running up the estuary, rippling the surface. However, in lulls in the breeze I could see mullet moving in the same swim where I'd caught yesterday so I headed back there.

The session was similar to most of yesterday's, with fish all over my baits but not taking them. I stayed put though as I thought it was just a matter of time and a couple of hours in, as a particularly active looking group of fish moved through my swim, my left hand tip dropped back.

My strike met with satisfying resistance from a somewhat livelier fish than yesterday's. Seven or eight minutes later I drew this handsome 3:15 into the shallows.

I fished on another hour and missed a good pull last knockings for that swim as the flood tide pushed the fish out. I was a bit cold and damp so I decided to give it best rather than follow the fish round onto the west bank, and I was happy anyway to have caught my January mullet. That's now eleven consecutive months I've caught, roll on February.