Work took up the rest of November, and the first week of December. I finished the last batch of exam scripts just in time for a visit by Keith Gillett, the chairman of the National Mullet Club in UK.

Unfortunately Keith brought some horrible weather with him, a blast of strong northerly winds straight from the Arctic dropping the air temperature close to zero. We fished two long days at Rosscarbery and though I was slightly surprised that we saw a few mullet each day and we did have a couple of half-hearted bites on the first afternoon, ultimately we blanked. The swan population of West Cork seemed to have descended on Rosscarbery and they made a real nuisance of themselves.

On Monday this week I was back, this time with Julian. It was flat calm and the water was both low and very clear and although the air temperature was up to about 10 celsius, the water still felt icy cold. There seemed to be plenty of mullet about but they mostly stayed well out in the middle of the pool. The few that strayed into range showed no sign of feeding on our baits, another blank! Most of the swans had moved on but those still present hung around us right through the session, a proper pain.

And so to today. It was overcast with drizzle on and off, but there was a gentle SW breeze putting a ripple on the surface and the air temperature was up to 13 celsius so despite the recent poor form I felt much more confident about the prospects. Another positive, the swan population was down to just two adults and their four nearly-grown cygnets, and happily they left me alone all day!

I had a good look round on arrival and found a big shoal of mullet close in to the shingle beach under the N71 causeway east of the bridge arch. I went back to my car and fetched my tackle, jumped down the wall onto the beach and set up my leger rods a little to the right of the shoal. I fished one bait close in and to my left, about where I judged to edge of the main shoal was, and the other bait further out aimed at the odd fish I could see topping out there.

They certainly weren't going mad for bread but I had a couple of knocks which may have been line bites and then after about thirty minutes and a couple of re-casts, a proper take on the close-in bait. The fish ran out strongly but I stopped it without bother before it reached the various snags on the edge of the mudbank offshore. It seemed a good fish and it gave a decent account of itself as I worked it gradually closer towards me. After seven or eight minutes I was able to beach it in the shallows. It was a really nice fish of 5lb 1oz ...

It had the typical pale colouration of the winter fish at Rosscarbery, which I think goes with the shallow clear water; also an unusual clear band on the trailing edge of its tail. I'm not sure what this is about - perhaps it has grown back recently after a fin-rot episode?

Unsurprisingly the main shoal of mullet had spooked and moved off while I was playing the fish, but I continued to see occasional whelms and bow waves further out, so I fished on. I had a couple more line bites (the fish spooked as I struck, well short of the bait) but no more takes so after an hour or so I moved on.

I could see some fish moving out from the first section of wall down the west side of the estuary, where I'd parked the car. I wasn't sure they'd be feeding any better than the fish I'd just left behind, but I decided to give them a go while I sat in the lee of the car eating my lunch. I'd just finished eating and was about to make a coffee when the left-hand rod pulled over. This rod was fishing well out from the wall, and it took a while to play the fish in even though it wasn't particularly large ... 2lb 9oz. I returned the mullet and re-cast both rods, then settled down to the coffee. I'd just finished drinking it when the right-hand rod kicked a couple of times and I was into another mullet that had taken close in to the wall ... a very lively thicklip of 3lb 7oz. 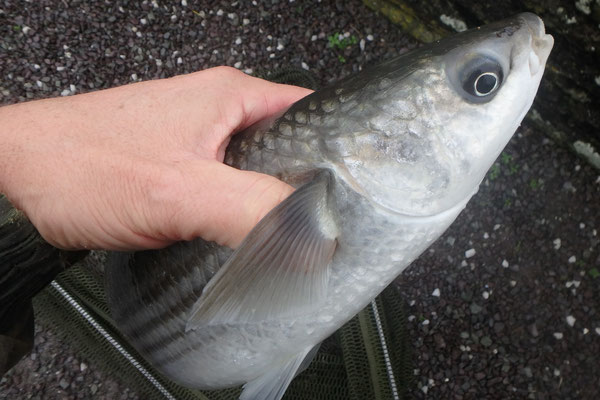 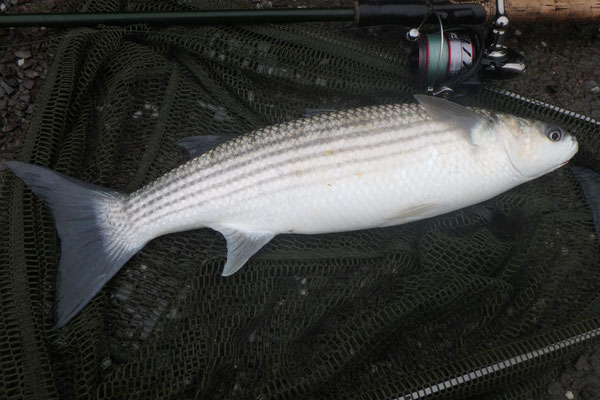 The swim went very quiet for an hour or so after that, and the drizzle turned into a light rain. I was happy with what I'd caught and decided to call it a day.