Three mullet sessions to report on here, all at Rosscarbery which is a great venue to have available when westerly winds write off most of my other mullet marks, as they have all too often recently.

On 26th September I had a morning appointment in Cork, so I arrived late lunchtime. It was another dull and blustery day, so I set up the leger rods on the sheltered west side of the estuary pool. There were decent numbers of fish about and I ended up with four on the bank ... 4:06, 2:14, 4:10 and a lovely specimen fish of 5:07 to round the day off nicely. 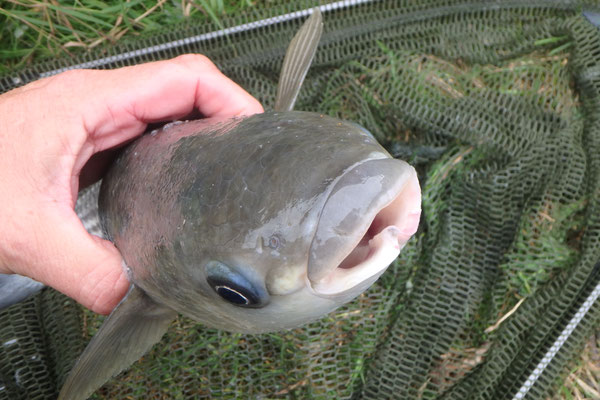 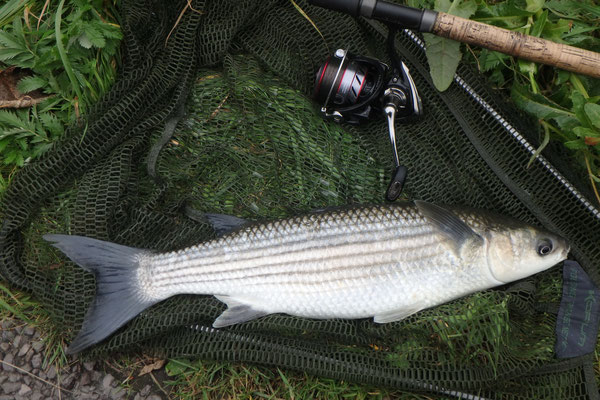 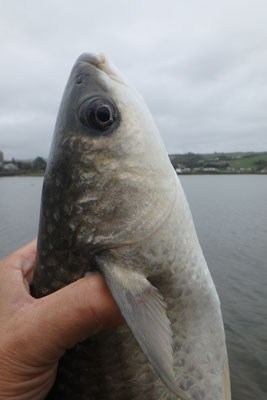 Later that week on the 29th, I was back again. The wind was really howling today, but I wanted to go to meet my Facebook friend Craig for the first time. I knew he would be fishing at Rosscarbery having taken a detour on his way home to Dublin from a few days away in Kerry.

Craig was already fishing from the road in the corner by the hotel, and we had a chat while his rod tips waved in the wind. There were several others set up along the road, I gather mainly refugees from a cancelled boat trip, so after leaving Craig I drove on further down the west side away from the crowd and also in the shelter of the trees.

The water was low and clear, and although I could see a few fish moving they didn't look that interested and I wasn't that hopeful. Two hours passed with one torrential rain squall but without any attention from the mullet. Then a little knock on one of the tips repeated, and I struck ... a 3lb 12oz thicklip. Next cast, I had a much stronger pull, and a much more powerful fight, from another of 4lb 6oz ... 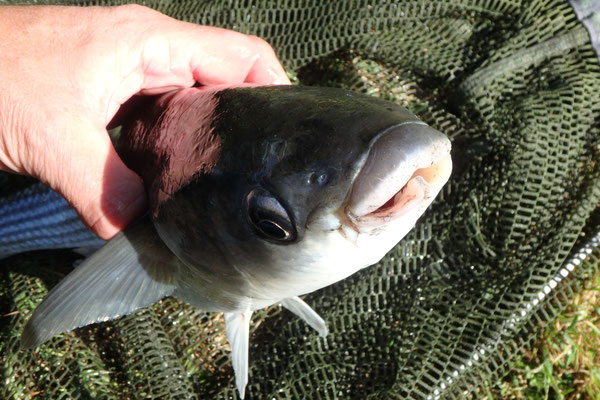 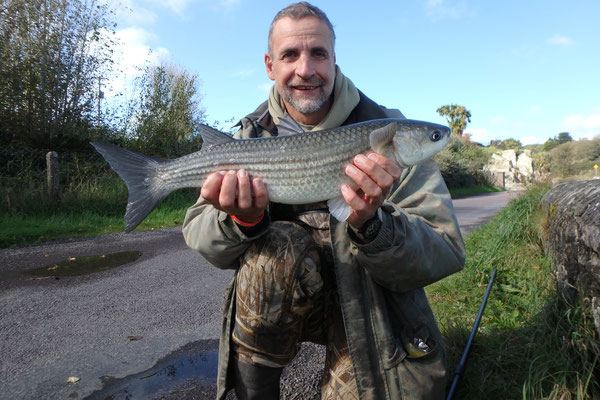 That seemed to be that for that swim ... I fished on another hour without a knock and no longer seeing fish. I had another chat with Craig en route to fish my wading swim by the bridge arch, but it was hard work on the float in the wind and after a fruitless hour I decided to move again, this time into the lagoon.

I set up on one of the little piers by the activity centre, the float set to fish about a foot deep which would be just off bottom on this neap tide. I missed good bites on the second and third trots through and then ... nothing. I don't think I bumped the fish on the second strike, but it seemed to have moved on and I fished on another hour without a definite bite, though it was sometimes hard to be sure in the choppy water. Another squall passed through, then a rainbow seemed to promise much ... and a few minutes later my float bobbed then pulled away. I struck and happily the fish ran out this time so there was no repeat of the flagpole incident. After a very good scrap lasting eight or nine minutes, I slid the net under a pristine fish of 4lb 2oz. 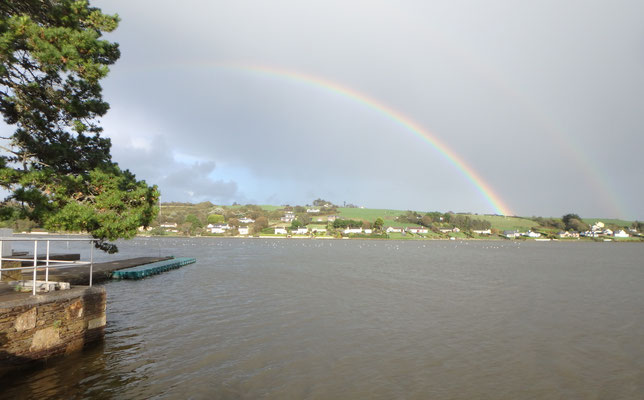 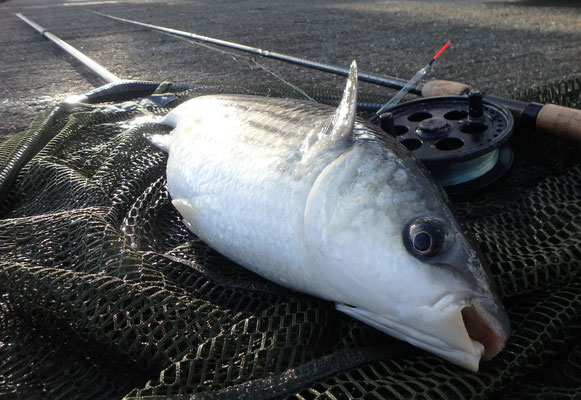 Today I was back at Rosscarbery to meet another blow-in from the UK called Julian who wants to get into mullet fishing and contacted me through the website here. We met by the lagoon but couldn't see any movement in there apart from cormorants, so it was good to see plenty of mullet topping in the pool the other side of the road.

I'd brought along two rods already set up for legering so we were soon fishing from the grass, putting one out each. Then I started showing Julian how to set up the rig on a third rod. We'd just got as far as the fluorocarbon trace when out of the corner of my eye I saw my rod tip starting to nod, so I grabbed the rod ... nothing much happened, maybe a little slack, I struck anyway and fish on. Then I thrust the rod into Julian's hands! It had been an unusual bite and it was an unusual fight, with the mullet coming in easily then coming to life a bit in the edge. Julian didn't do too much wrong, maybe a bit too gentle if anything, so it was a bit of a surprise when the fish came off after a few minutes.

Julian insisted I take the next fish, which as it happened wasn't very long coming. On my very next cast my rod heeled over in a much more typical Rosscarbery bite. The fish ran out a little way then just hung out there for a good few minutes, before giving up and kiting in quite easily, and Julian netted it first time.

It was an absolutely pristine thicklip of 5lb 3oz, so much so that I hesitated more than a few moments before removing five of its scales for the IFI sampling. As Craig said on Facebook, it's for the greater good.

We set up fishing again but it had gone very quiet, and a breeze was now rippling the surface making it difficult to tell if we still had any numbers of fish in front of us, though the occasional decent whelm suggested there were still some there.

After a while I was in again. Another good bite and a decent but not prolonged fight with a fish of 3:11 ...

Another lengthy spell of inactivity followed, ended by a little knock on Julian's rod that came to nothing, then a slightly better bite a few minutes later.

The fish was on ... then off again a few seconds later. It happens in mullet fishing we all know, but I was disappointed for Julian who had to leave shortly after without catching on his debut mullet session. I suspect he won't have to wait too much longer.

When Julian left I moved into the lagoon for some floatfishing. I fished a couple of hours and had a few little flurries of bites, but they were very feeble bites and I think very small mullet were responsible ... I couldn't hook one anyway.

Then I moved back across the road. The tide was coming up now, the water had coloured up and the breeze had freshened. I spent another couple of hours without a bite on leger, and without even seeing a mullet.