A few mullet trips over the past week to report on.

The mark above is one I've had my eyes on for while as I've occasionally seen mullet in the shallow inlet on my way to the adjacent rock mark.

Last Saturday the conditions seemed right, so I took my mullet float rod on a walk across the fields and was pleasantly surprised to find some mullet in residence, and after fifteen minutes or so feeding mashed bread they turned on to it.

Sadly although I think there were a couple of bigger fish present, it soon became clear that most were tiddlers. They gave me a bite a chuck for an hour or so till they departed on the first of the ebb tide, but only one got the bait far enough into its mouth for me to hook it. Pretty little fish but it really was little ... bigger ones to come from this spot I'm sure.

On Wednesday evening I fished my favourite estuary on the Mizen peninsula. I arrived a couple of hours before the new tide would flood into the pool, but as half expected at this time of year, the only mullet present were shoals and shoals of tiddlers of all sizes from fry to about a half pound. Still it gave me plenty of time to get my leger rods ready to fish out on the flats from the road causeway as the pool filled up. As the tide arrived my two pop-up crust baits plopped out, followed by balls of groundbait delivered by catapult. It wasn't the best session I've had there, but at least some mullet came in with the tide and roamed around the pool for an hour or so before going out again. I had two out, 3:10 and 3:09. The second was netted and photographed for me by a helpful guy who'd stopped his car for a chat about the fishing, turned out he was a physics lecturer on his holidays, physics is my subject too. 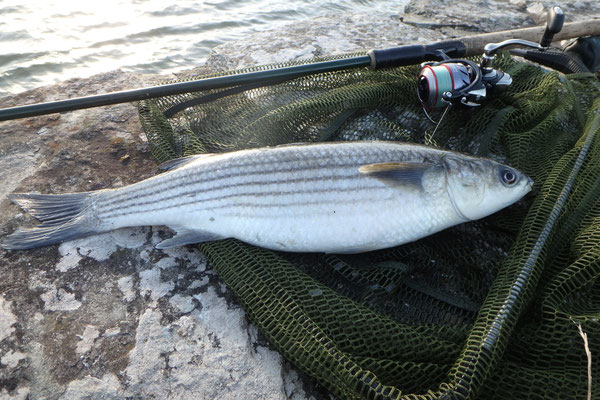 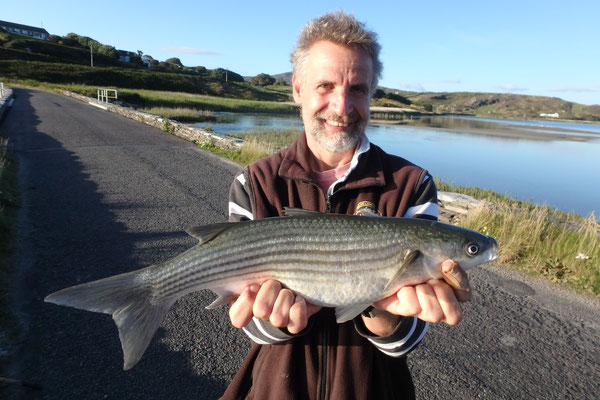 On Thursday I visited my local mussel factory for the first time since May, when I'd found out the mark was topped up with small coalfish.

My hopes raised immediately when I was greeted by a fishy smell and a flock of seagulls, both indicating the discharge pipe had been working recently. In fact it continued to work intermittently throughout the session, gushing opened shells and fragments of mussel flesh across the rocks as they welled up from the pipe which appeared somewhat storm-damaged.

My hopes were raised further by the sight of two or three mullet feeding on the surface. Past experience suggested there'd be many more down below.

What followed was a remarkable three hour session in which I landed ten mullet. I'm sure I'd have carried on catching if I'd stayed longer, but ten is enough. All were caught on float, set shallow at first and deeper later on as the breeze got up and the waves dispersed the surface feeders.

I alternated between bread bait and mussel flesh, there being plenty of free bait emanating from the pipe. The fish didn't seem to have much preference, though the bites were marginally more positive on mussel.

The gloss was only slightly taken off the session by two unfortunate events. The top ten inches of my most recent Preston float rod snapped off drawing the third mullet of the day to the net - I'm hoping I'll get a new section under the guarantee as I've only had it since December. Fortunately I had my leger rods in the car and I know my old Drennan Barbel Specialist rod makes a perfectly serviceable float rod with the 8oz quivertip in. I also lost a stonking fish that ran right off in front of the rocks to the right, only to come off after I'd turned it and it was gradually coming back towards me. It waved a huge tail at me at one stage ...

The fish were temporarily confined in a rockpool to avoid them spooking the others when returned. I did some photos as I put them back at the end of the session. These are the biggest, in order, a 4:02, a brace of 4:00s and a 3:10. 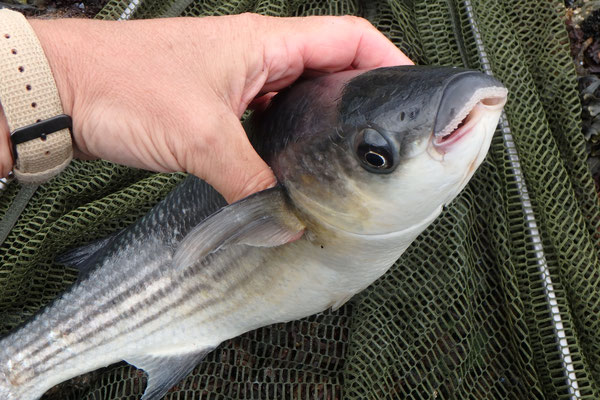 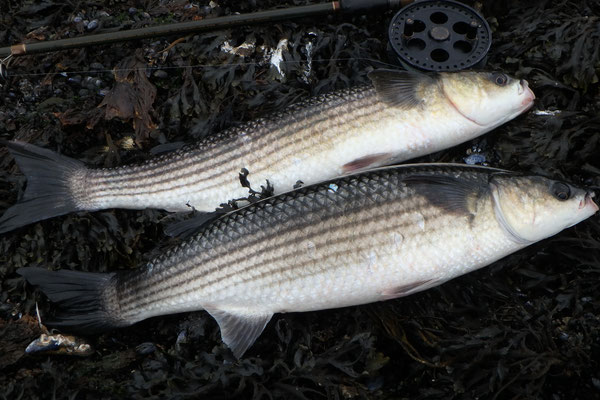 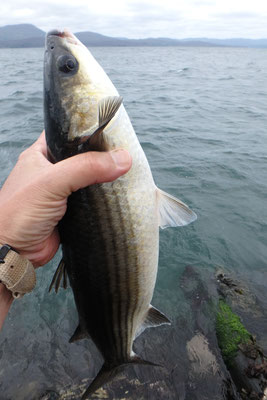 On Friday I was back at Rosscarbery. The conditions seemed similar to those on last week's visit. I fished in the same swim, and there were fish showing, perhaps not quite as many. But what a difference a week makes ... this was a really dour session, five hours of motionless tips apart from the few seconds when both rods bent round at the same time, fishing baits 40 yards apart!

The left-hand rod went marginally sooner, I'd just about picked that up when the right-hand rod went. I loosened the drag on that reel and played in the first fish with one eye on the other rod and its mullet occasionally swirling on the surface, fortunately well clear of the one I was playing. Seven or eight minutes later, with the first fish in my landing net in the shallows, I picked up the second rod. The line was slack and festooned with weed, but the fish was still on. Unfortunately this time the weed all gradually slid down to make a massive green ball on the weight, and the fish levered itself off the hook pulling against that lot. I think it was marginally bigger than the one I'd landed, a respectable 3:10 with the tail of a 5lber ...