Rosscarbery Trips ... and a new PB.

I finally emerged from under my mountain of exam marking in mid-July, with just a short window before we had family visiting and then I had another short work-related trip to the UK. Desperate for a mullet fix, on 12 July I headed for Rosscarbery for an afternoon session. It was a bright if blustery day, and Sylvi came too.

There were plenty of fish showing in the shallows down the sheltered west side of the estuary. I set up my leger rods and cast out full of confidence, but the first couple of hours were very quiet, with just a couple of probable line bites.

Sylvi went for a walk down to the pier with the dog.

Finally a proper pull came on my right-hand rod, but I missed it. The fish may have moved straight on to my left-hand bait, because a couple of minutes later that also pulled down. This time my strike connected, but it was instantly apparent this wasn't a big fish. A couple of minutes later a pretty little 1:14 thick lip was in the net.

Ten minutes later my right-hand rod pulled hard over without warning as a significantly bigger fish hooked itself and headed out towards the middle of the pool. I grabbed the rod, no strike necessary, and hung on till the fish stopped running, then started the process of slowly playing it in. Ten minutes later it was in the net, along with the little one which was still resting in there. I took a photo of the pair of them together, and when Sylvi returned a few minutes later she took the pic with the bigger fish, which I'd weighed at 4lb 1oz ... 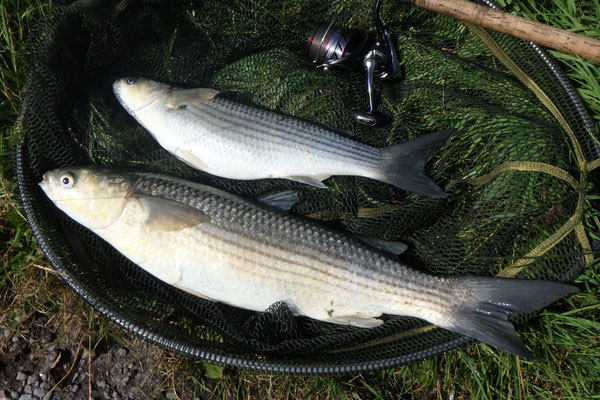 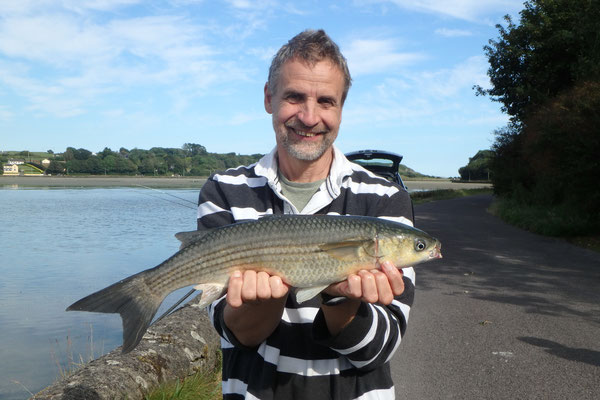 A few minutes later I had an abortive rattle on the right-hand rod and then, as abruptly as it had started, the feeding spell was over. Cue a final frustrating ninety minutes with both tips motionless as mullet bow-waved and swirled everywhere in the swim.

Four days later I was back again. The tide was later and there seemed to be less fish present,  but overall the session was remarkably similar.

After a quiet couple of hours, I struck into a repeated-nodding bite on my right-hand rod. Again - only a small fish to start, and after a game little scrap I had this 2:01 in the net.

While I was baiting that rod up again, I noticed a fish swirl in the shallow water and, in the same instant, my other rod jagging down. This was a better fish about 4lbs but it soon picked up a big lump of blanket weed well up the line. I had a feeling this wasn't going to end well, but the fish hung on as the blanket weed gradually slid down the line towards it. I decided to try to take the weed and mullet together with my net, but in the event I only got the weed. The fish gave a final head-shake as it neared the rim of the net, and was gone.

Soon I had both rods fishing again. I settled back in my chair for about thirty seconds, then my right-hand rod heeled right over, and a mullet was running line off the drag even before I could pick it up. Out and out the fish ran, and I began to get fearful of it finding the rocks and branches and other debris on the fringe of the distant just-submerged sandbank. Eventually the mullet stopped, and turned, and the hook came out! Good fish - I was gutted.

It's not that often in this fishing game that you get the chance of instant redemption, but I'd had my lines out again barely five minutes before the same rod lunged over. The long run could have been an action replay, but this time the hook stayed in when the fish turned. As I started to recover line, I could feel it was sliding through a big lump of static weed. Soon I had the fish in as far as the weed. It wouldn't come any further but I kept a good tension in the line, and after a minute or so suddenly the fish was free as the line cut through. I played the fish in without further mishap ... a lovely 5:07 thicklip. It was the last action of the day as the feeding spell again turned off like a tap.

Since my return from the UK trip, the weather has been unsettled with strong westerly winds and big swells running into the bays here on the Atlantic coast. Plans for rock fishing have been put on hold.

On 30th July I was back in the same swim at Rosscarbery on a windy day punctuated by rain-squalls. Though few fish were showing, I was confident something would turn up at some stage. But it was not to be ... I packed up after a dour six hour session biteless, damp and disappointed and wishing I'd changed swims after a couple of hours or so in search of some fish.

And so to this afternoon, and more squally weather. I drove down along the west bank hoping I'd see more fish this time but the swims seemed devoid of mullet. I couldn't contemplate another blank like Sunday's, so I turned the car round and ended up fishing from the grass near the bridge arch, facing into the wind. It was choppy, verging on rough as the squalls passed through, but I could see plenty of mullet moving and judging by the size of some of the whelms, there were some decent fish amongst them. I set up the rods and fished one pop-up crust bait well out, the other closer in.

It was the close-in bait on the left-hand rod that was taken first, on its second cast. Without any preliminaries, the tip was yanked right down and once more I found myself hanging on as a big mullet streamed line out behind it as it made for the middle of the pool. But today was my day and everything was good. Even the realisation that I'd forgotten to set up my landing net was not a big problem. After ten or twelve minutes I had the fish in close and beached it in a small gulley between the rocks, then picked it up. It was a wonderful thicklip of 5lb 14oz ... 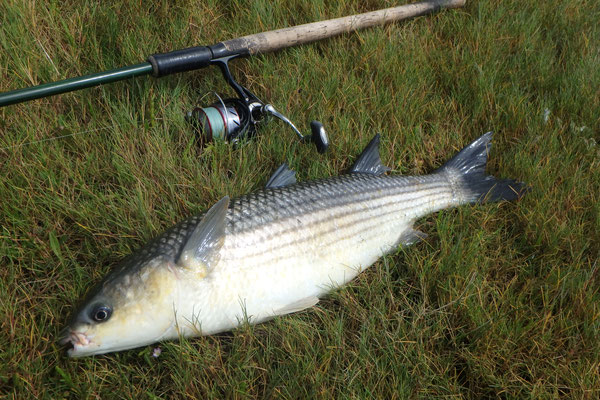 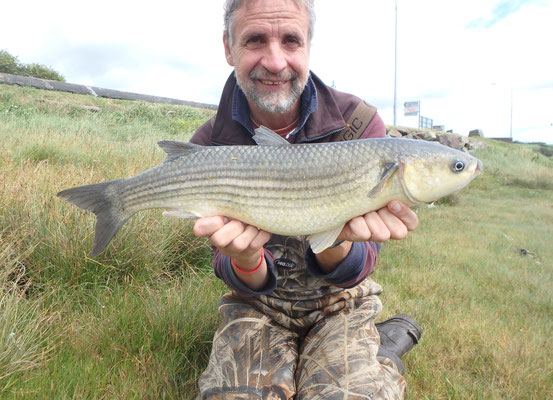 I was soon fishing again but the next hour was quiet as the tide started to edge up.

I noticed a fish swimming past repeatedly just beyond the rocks, its head down and the tip of its tail breaking surface. I dropped the close-in bait right into the margins. A few minutes later it was taken, another good fish but not in the league of the previous one. While I was playing it, the distance bait was taken too. I loosened the drag right off on that rod and concentrated on landing the first fish as quickly as possible. Then I left it in the net in the shallows while I dealt with the second one. The line was festooned with lumps of weed when I lifted the rod, but most of this shook off during the fight and I was able to beach it fairly easily. The two mullet were like peas in a pod, weights 4:07 and 4:08.

Fishing again, and after about a half hour I missed a bite on the distance rod. I cast back as close to the same spot as I could, and a few minutes later I struck into an identical bite.

At first I thought it was just a small fish, as it gave a token wriggle and came in very easily right to the rocks. Then it saw me and powered out with an impressive bow-wave and a leaving a series of massive whelms in its wake. It hung far out for a good while but then came in quite easily again, kiting to the left and straight into the net as I moved round to intercept it. In truth the fight was nothing like as good as the 5:14 and I was surprised by the size of the fish, particularly as I lifted it from the net and could barely get my fingers across its back. It was a super new PB for me in Ireland of 6lb 14oz ...

I fished on, not caring too much if I caught another fish or not. In the event, I had one more bite on the close-in rod before the feeding spell seemed to come to an end as the tide dropped away. It was the smallest fish of the day, but at 4:03 still well worth the effort of catching.

Another angler passed by just as I was landing that last mullet, a guy on holiday from Yorkshire (I think) who came down for a chat as I unhooked the fish. "That's really annoying..." he said two or three times, meaning to see a mullet caught while he was still blank for the week with his orange bubble float and bread-fly. I decided it was best not to tell him about the other four I'd landed.