I arrived to find Bantry Bay almost eerily calm, especially considering it was mid-afternoon not early in the morning. Not only was there not a breath of wind, but the almost incessant Atlantic swell in these parts had dwindled to nothing after a week or more of unusually settled weather.

Baits for the day were fillets of mackerel, mackerel heads or whole small squid, fished as pop-ups for this very snaggy mark by wrapping in a small piece of polystyrene with bait elastic.

The first hour and a half was really slow but as high water arrived, the bullhuss turned on the feed for the first hour or so of the ebb.

First off was a missed take on squid. The bait was still okay so I wrapped a section of mackerel on to it to give its scent a boost, and cast it out again. Within a few minutes I was into a nice huss around 10lbs that put up an unusually good scrap as it came up through the deep clear water. Then a small one about 4lbs on a mackerel head, then a little strap conger on a mackerel fillet that made a right mess of the trace, so I had to tackle up again. While I was doing that, the other rod went but I missed the huss/conger that had taken the squid and hooked into a snag instead ... more tackling up!

Finally settled again with two baits back in the water, I found the feeding spree had abated somewhat. As the water was dropping away quickly I started to think about packing up, but then had a nice run on a mackerel head. This one had gone to ground when I struck, but I could feel the fish there and after half a minute it freed itself and I played in another nice huss, this one around 9lbs. 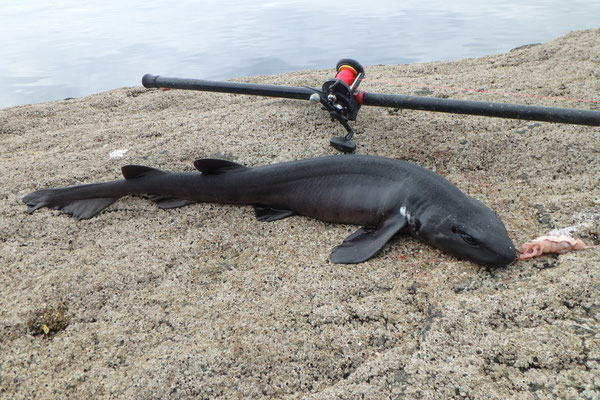 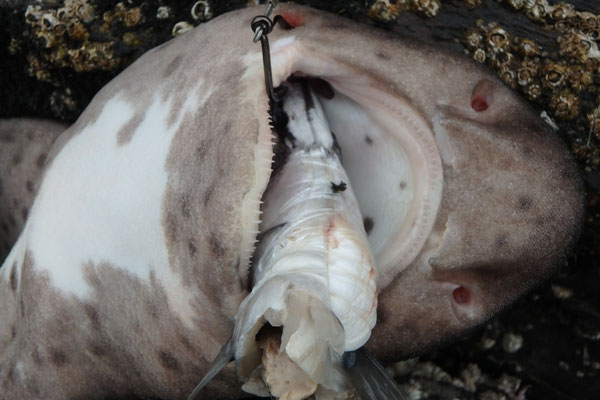