In contrast to the mulleting, other fishing has been slow recently. I fished a rock mark last week for just a couple of doggies. The only better fish of the day - probably a big huss - escaped when the Sakuma circle hook snapped, there's a first. This was followed by a blank session one morning on Bantry Airport strand, definitely not a first.

This afternoon I headed to another rock mark on the Bantry Bay side of the peninsula.

Unusually today I didn't have the spot to myself as three Lithuanian guys were already there. I had to admire their enthusiasm setting up with mackerel feathers in early April and indeed, later on, their persistence in still thrashing away hours after I'd have decided I was wasting my time and gone home ...

Still, there was plenty of room for all of us so I set up on the left hand end fishing mackerel head on one rod and squid/mackerel cocktail on the other, both baits popped up by wrapping in a small chunk of polystyrene.

I missed bites first cast on both rods and although I kept getting rattles on the mackerel heads it was the other rod that produced the better takes and some fish on the rocks.

First in was a small bullhuss, followed next cast by a larger one, still only about 7lbs though.

Next cast there were a couple of tentative pulls that took a few inches of line off the ratchet, then nothing. When I started to wind in a few minutes later, there was a thump on the rod tip which then heeled right over, and I found myself playing a conger. It was no monster but certainly it was a better fish than many of the straps I've had from the rocks here, about 13lbs or 14lbs I would think. Not so big though I couldn't hand-line it out onto the rocks! 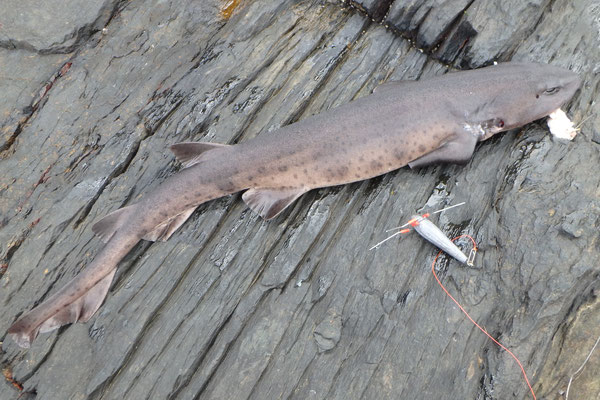 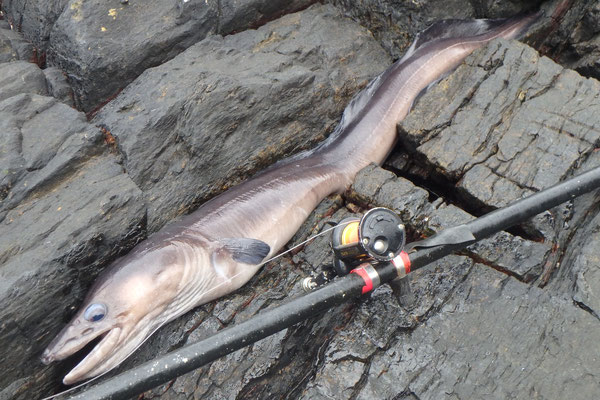 What had started out quite a bright afternoon had become gradually duller, and it started drizzling while I was sorting out the conger and returning it. Soon after I'd got two fresh baits out it started to rain more steadily. The Lithuanians packed up and left, and I decided to follow them, not because I couldn't stand a bit of rain but because it had turned the rocks treacherously slippery. It was no fun at all walking back along the sloping ledge to the access point where I could climb up off; I'll try not to get caught out like that again.

The area just offshore from this mark is one of five that have been earmarked in Bantry Bay for mechanical harvesting of kelp starting later this year, the first such industry in Ireland. The licence was granted in 2014 but seems to have slipped through on the quiet without any meaningful public consultation or any environmental impact assessment whatsoever. Since it came to light it has been causing a good bit of consternation amongst local fishermen and environmentalists. There's a petition here if you would like to add your weight to the local campaign to have a stay put on the scheme pending proper investigation of its likely impacts.