The time had come, almost a year after booking my flights.

This was to be my sixth visit to the Skeleton Coast of Namibia, the first in 2002 having been won as a prize from Sea Angler magazine in UK. This trip was my first since 2010 and I'd be there with my good friend Dave Matthews, our fourth time in Namibia together. We'd have seven days fishing before Dave travelled on inland to a safari with his partner Jane, and I came home.

I flew from Cork to Heathrow with Aer Lingus then a long flight overnight with Virgin Atlantic to Johannesburg. I met Dave and Jane at Johannesburg for the onward flight to Walvis Bay where we were met by our guide, Johan Burger. The final leg of the journey was a drive north along the coast through Swakopmund and on to Henties Bay where were staying in a rented house.

Our days started at 8 a.m. and we picked up picnic supplies en route for our first fishing which was aimed principally at spotted gully sharks, the intention being to catch a smallish one or two to use as bait and chum for bronze whaler sharks later in the day. Except it didn't quite work out that way this time: the gullies were scarcer than usual and those we caught were often great big lumps up to more than 50lbs. At this sort of size the gullies are good sport in their own right and too precious to use as bait! They are similar to bullhuss in some ways but they are much more thickset around the "shoulders" and consequently much stronger. We caught them on mullet baits (from boxes of small frozen mullet that can be bought in tackle shops) and some on chunks of the small local catfish that took the mullet first.

Having secured the bait - or having decided we'd have to go with the contents of Johan's freezer box which was well stocked with sandsharks and some massive mackerel - it was off in search of bronzies.

It has to be said that this trip involved a great deal of driving in search of suitable spots, as we were plagued with a large swell, weed and water temperatures plummeting from unusually high levels earlier in the Namibian summer. The colder water seems to go hand in glove with "sulphur" - brighter green and smelly areas of water that are the kiss of death for fishing, especially bronzie fishing.

The ideal spot is a riptide out through a gap in the offshore bank ... waves come over the bank to either side then the water flows along the gully from both sides before heading out again through the gap. Such a feature gives a good chance of finding bronzies provided the rip isn't too fierce to fish and everything else is right - water temperature up, nice colour, no sulphur and no weed! If everything looks good, out come the big rods and reels for a go at the bronzies ... generally though this time, conditions were marginal in one respect or another. Johan was restless, and often after a fruitless cast or two we were on the move again in search of somewhere better.

When we settled on a spot, Johan would stake the chum out. This would either be a mesh bag full of fish trimmings or the carcass of a gully shark ... the gills and liver are removed to use as hookbait, the tail and fins are removed and several other deep cuts made through the body so that it gradually bleeds out into the surf, hopefully attracting bronzies.

The rods are made on single-piece blanks, as there'd be every chance of the rod failing at a spigot joint in a fight with a big bronzie. Johan uses slightly shorter rods than most of the Namibian guides; they definitely let you subdue a bronzie a bit quicker than the longer rods the others use. His reels are big Shimano lever-drags ... 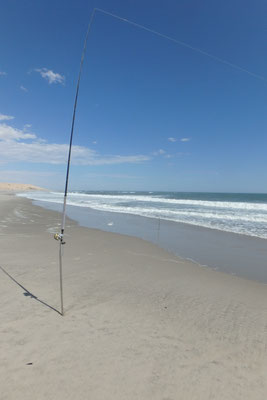 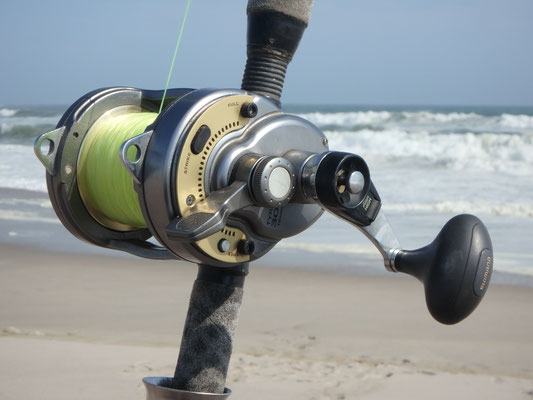 On our first day, Wednesday, we ended up late afternoon at Mile 28 ... that's 28 miles north of the police station in Swakopmund. The conditions looked, well, if not great then better than anything else we'd found.

I missed a big drop back bite, and probably the fish moved straight on to Dave's bait where it gave a repeat performance ... except Dave hooked it. It pretty soon became clear it wasn't a bronzie, and soon a cow shark emerged from the surf ... an interesting catch because we haven't seen that many, but to be honest a nasty, snappy thing that doesn't fight very well then contorts itself on the beach trying to bite you!

Soon after, I had a proper pull down bite and leaned into the fish a few times to set the circle hook. This was a much better scrap ... not the biggest ever, but a bronzie and I was happy to open our account.

We fished right into the dusk, and last knockings Dave had a pick-up. This was a much bigger fish that streamed line off into the African sunset. The thick end of an hour later, and in pitch dark, Johan waded into the surf to bring ashore Dave's bronzie of around 220lbs ... 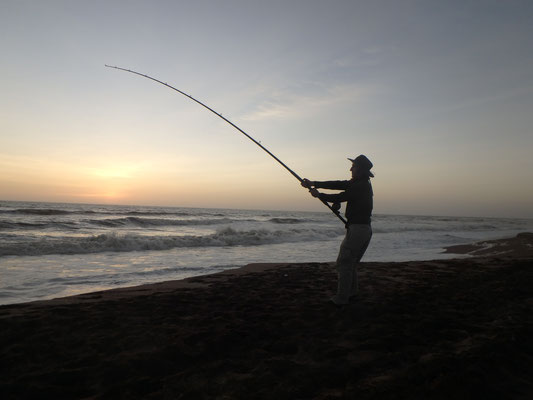 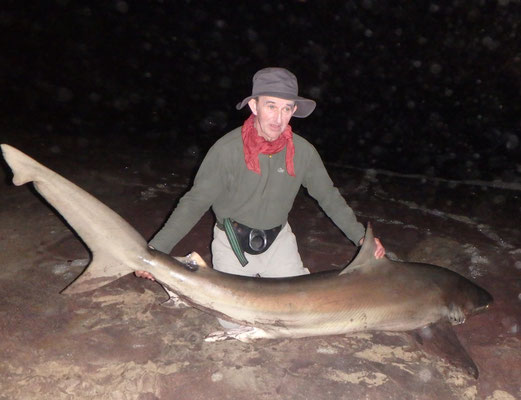 On Thursday, the surf was bigger and we struggled to find places to fish for bronzies. After much driving, we settled into a spot in Cape Cross Bay, well north of Henties. It was shallower than most of the places we fish but it had produced recently and it was fishable. We were hopeful of some action as the tide came up but it proved slow.

Dave eventually gave up and went off for a walk with Jane ... and they'd not gone a hundred yards before my rod pulled down! This was a bigger fish than I'd had last night, and took about forty minutes to get in. Johan estimated it at about 80kg or 176lbs.

Dave started fishing again and soon had a line bite ... literally ... his rod pulled down then sprung back as the line was cut, a bronzie having picked it up as it searched for his bait with its mouth open. Unfortunately it must have found his cut-off bait and swum off with it, as we had no further interest.

The next three days were very difficult with a massive swell coming in off the Atlantic. We caught a few gullies and drove many miles in search of bronzies between Mile 100 north of Swakopmund to Long Beach to the south. The closest we came was a missed take for Dave at Mile 72 on Saturday afternoon ... a good fish picked up his bait and ran out with it, then chopped it off just below the hook.

By Monday the swell was dropping and hopes were renewed, though the fishing conditions were far from pleasant ... an unseasonal east wind off the desert raised temperatures on the beach to over 40degC and we were sand-blasted at times when the wind really picked up.

We ended up fishing at a mark called Popeye, just north of Henties. I had a bit of a 'mare with two missed chances. On one the line broke inexplicably in the rod rings, the other I made a mess of the pick-up, struggling to get the rod out of its rest it was locked so hard over. Fishing the rod in the rest isn't ideal, but by this stage it was really doing my back standing for long periods holding the rod.

Dave did much better, with three bronzies from three pick-ups. The first was a small one but the third was a real beauty of about 120kg or 264lbs, right into the dark again ... 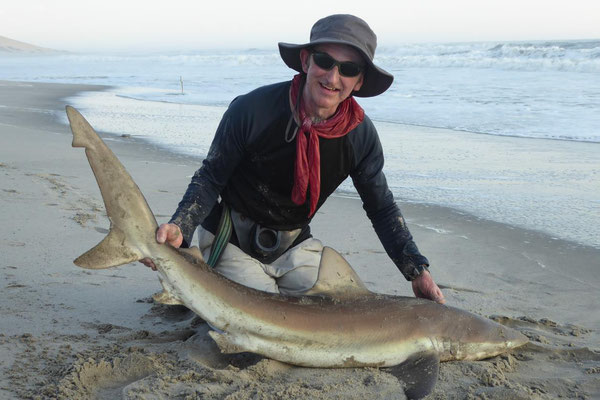 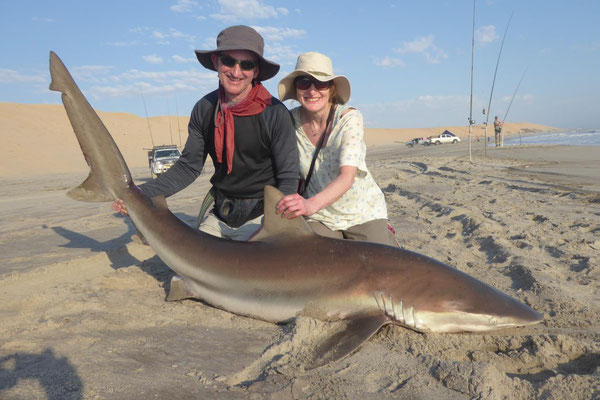 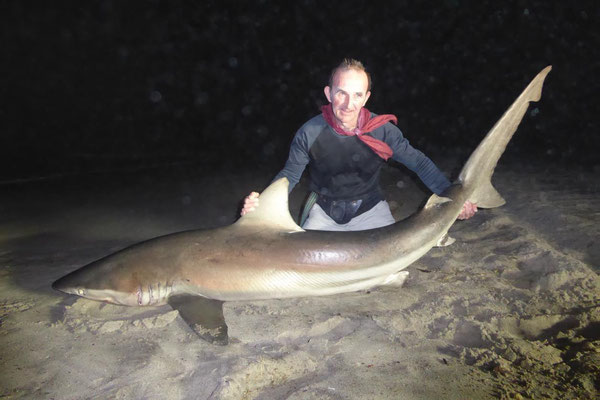 Today, Tuesday, our last day fishing, we again ended up at Popeye for the afternoon and evening. It was another scorcher of a day, though we had some shelter from the easterly paint-stripper wind from the sand-dunes behind the beach.

I had a pick-up on the last of the ebb tide, just after lunch and in the hottest part of the day, and this was a real powerhouse of a fish. It ran out maybe three hundred yards then hung out in the back for a while. I gradually worked it in but when it got to the surf on the bank it perked up and ran right out again. It came in again gradually, then out a third time. I was wilting in the heat by this stage, but kept the pressure on this time to bring it over the bank. It kited to the right, and Johan was able to wade into the surf to pull it out and up the beach.

Johan estimated this one at 105kg or 231lbs, took the pic for me then dragged the bronzie back into the sea. They always swim off well, a delight to see. To be honest I think I was probably more knackered than the fish! 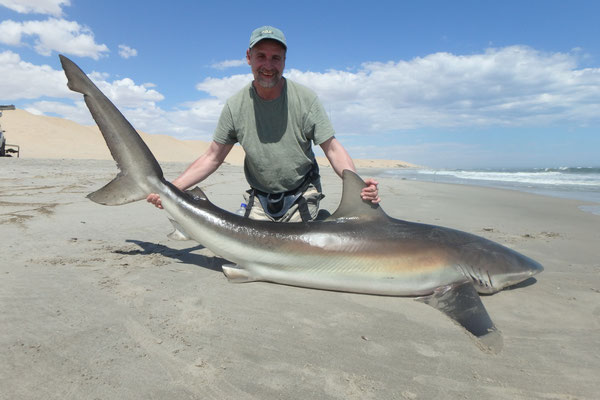 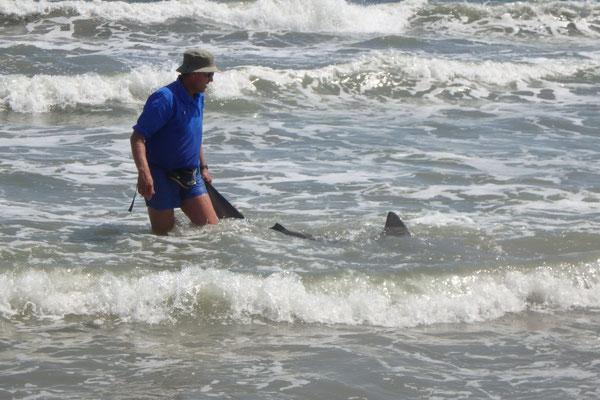 I had an abortive pick-up early in the flood tide but the session petered out after that, perhaps because the water was a touch colder than the day before. Dave unfortunately didn't get a bite all day despite fishing hard.

This certainly wasn't our most productive trip to Namibia, but that's the way with fishing and it was a good enough trip in very good company.

I booked my flights through the Irish online travel company e-travel and they were great both in their customer support (pay the extra €5 for their support package) and the prices. I paid less than €600 return from Cork to Walvis Bay via Heathrow and J'burg, which curiously was less than anything Dave could find in UK starting from Heathrow!

Johan Burger is the best of the Namibian fishing guides by a country mile. He and his wife Joyce run Bushworx and arranged Dave's and Jane's safari tour as well as the fishing.

Thanks to Dave and Jane for use of some of their photos here.