I'd never caught a December mullet before. I'd caught late into November on the south coast of England, but that was always a bit of a struggle and I'd run out of enthusiasm by the time December came. Years ago I took a pre-Christmas trip to Alderney and managed to blank.

December is a busy time of year for me work-wise. Last year I'd missed out on some potential good fishing, finding out after the event there'd been big shoals of mullet at Rosscarbery. So in the current mild weather I was determined to get out ...

I arrived to find good numbers of mullet in the shallows down the west side of the estuary, so I was keen to make a start. As I unloaded my stuff from the back of the car, I was dismayed to realise I'd left my landing net head at home. I had to relocate a hundred yards along the wall so I could fish close to an area where I'd be able to beach hooked fish ... not a problem in itself but the road is much narrower here so I wouldn't be able to fish out of the back of the car, and there was a persistent heavy drizzle.

The session really was unremarkable apart from its timing so late in the year.

I put out both leger rods with pop-up crust baits and catapulted out balls of groundbait into the area they were fishing.

This attracted the attention of the swans that seemed both more numerous and hungrier than earlier in the year. They were a bit of a nuisance but fortunately didn't get their heads down onto my groundbait. After a while they moved on.

The mullet became less visible as the depth crept up towards high water, but dead on high my left hand rod pulled hard over and I was into a good fish that stripped line in four or five powerful runs before calming down and coming in gradually. I edged my way left along the wall and beached the fish where the water shallowed up towards a small island, then jumped down the wall to grab the fish. It was a perfectly conditioned thicklip of 4lb 10oz, my first ever December mullet.

This marked the start of a feeding spell of sorts and over the next hour or so I had three more thicklips that weighed in at 2:13, 3:02 and 3:04. 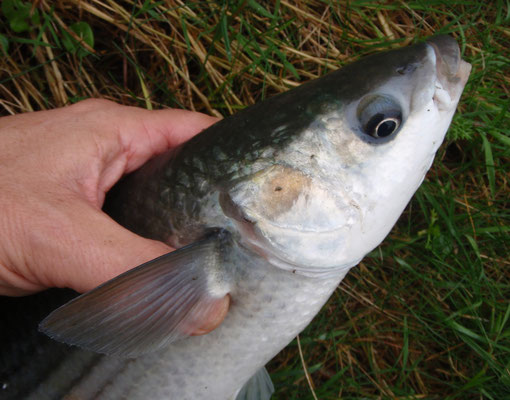 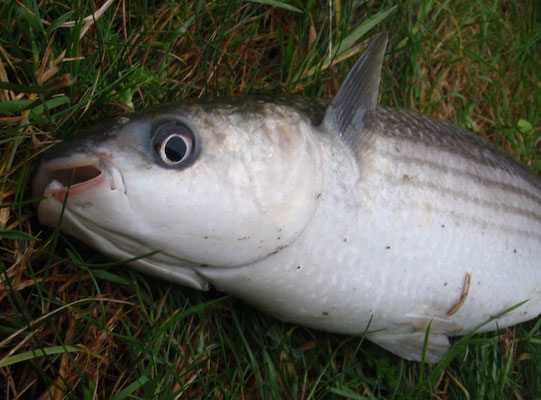 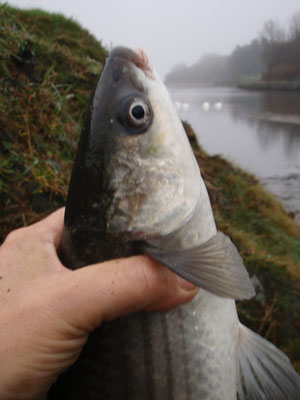 This size class of mullet had predominated earlier in the year but had been largely absent through the summer and autumn when most of the Rosscarbery stock seemed to be big 3s, 4s and 5s - I wonder where they have been since the spring?

As the water dropped away significantly the bites seemed to dry up, and the swans came back. I was getting progressively soaked by the drizzle and I was happy enough with what I'd caught, so I decided to call it a day.