After work meetings in Cambridge I headed down to the south coast for a few days before returning. It proved to be a fairly hectic stay trying to dovetail work stuff with seeing family and friends, but on Saturday I managed to steal a few hours to fish in the morning, before driving back to Cambridge later that afternoon.

I set off across Stanpit Marsh before it was properly light. My friend Dave Matthews had been catching up to last weekend, but the temperature had plummeted this week and the heavy frost on the ground didn't bode well. On the plus side I was treated to a wonderful dawn as I set up to fish the river channel down from Grimbury ...

Before long a light but cutting north breeze had cleared away the mist. I fished through the low water period without a sign of a bite and the only fish sighted were occasional small seatrout jumping. As the tide started to edge up I had a few rattles on the tips; they were difficult to hit but eventually I hooked a couple and confirmed my suspicion that they were dace.

It was nice in the sun and out of the breeze behind my brolly. Alan Butterworth turned up and we chatted for a few minutes before he resumed his walk round the marsh.

As the water reached the peaty bank I had a lunging bite on the right-hand rod, and played in a little thicklip of 2:12. A while later a repeat performance on the left-hand rod produced a 2:13. And that was it, despite fishing on a while longer. Not the biggest fish but both pristine and if they turn out to be the last mullet of my 2016 I'll be happy enough. 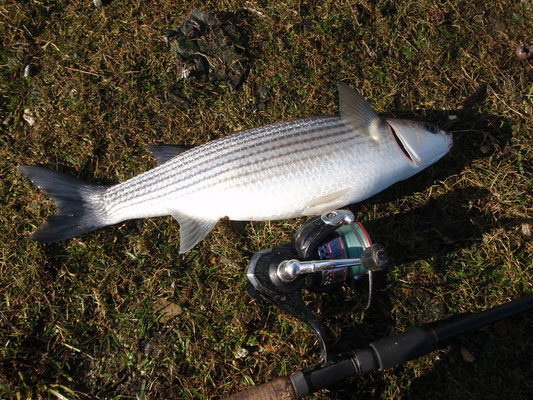 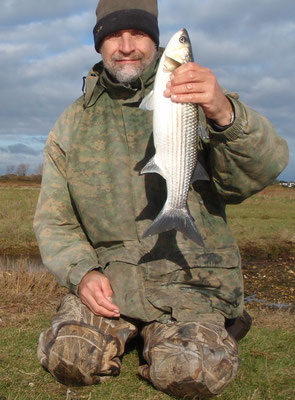