I fished today at an estuary on the Mizen peninsula. There had been a lot of mullet showing there on the same tides a fortnight ago, on a day I wasn't fishing for them, but that was a fortnight ago and today I was disappointed to see hardly any mullet activity as I looked around on arrival. There were a few shoals of fingerling fish surfacing from time to time, but that was all. The  breeze was just about southerly so whether it was still recovering from the east winds of the last two weeks or now winding down for the winter, I don't know.

I set up to float-fish in the deep pool just above the bridge. The float was trotting through nicely left to right, with the breeze in my face gradually pushing it in closer to the bank. Many trots later, the float dipped near the end of the run ... missed it, but I was ready for the repeat performance on the next time through and struck into a weighty fish.

The fish chugged all round the pool staying deep, but never did anything very spectacular. Eventually it weakened and a very thick-looking fish surfaced. Soon after I had it in my net. It weighed 5lbs exactly, and I was well pleased with that as it was only my second "five" from this venue.

I fished on, in all spending about three hours in that swim, but had no further bites. I moved to the rocks on the other side of the bridge, set up my leger rods and cast out onto the shallows on that side of the causeway. I had a couple of very half-hearted knocks over another hour or so before the new tide arrived and started pouring through the bridge arch. The weed that came with it made life difficult so I decided to move again onto the causeway so I could fish directly up the flow instead of across it. As I collected my stuff together I noticed the largest Hereford bull I've ever seen in the small field behind where I'd been fishing, separated from me by a couple of gorse bushes and some bracken! I moved off very gingerly ...

Soon I was set up again on the causeway and fishing more effectively. It remained quiet for another half hour or so, then a drop-back bite on my right-hand rod produced a nice 3:13. A twitchy bite on the left-hand rod turned out to be a much smaller fish that came off once I had it near to the wall. I missed a decent pull on the right-hand rod, then hooked a powerful fish after another drop-back. It kited round to my right and spent some time banging away close to the rocks before catching in the flow that was now in full flood through the bridge arch. I moved right along to get over the fish but eventually the hook came out and I imagine that the mullet was whisked away under the road! I saw the fish several times; it was not far short of the five pounder I'd had earlier in the day. The right-hand rod was soon in action again, this time a fish of 2:12. While I was unhooking it I missed a massive pull-round on the left-hand rod. And then, as quickly as they'd turned on, the feeding spell was over. I fished on a while, but had no further interest at all. As fishing days go, it had been hard work, but worth it. 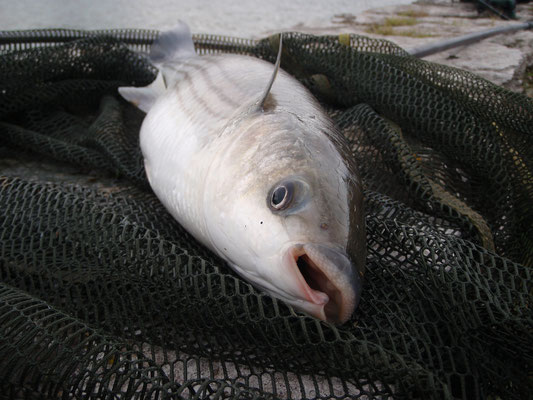 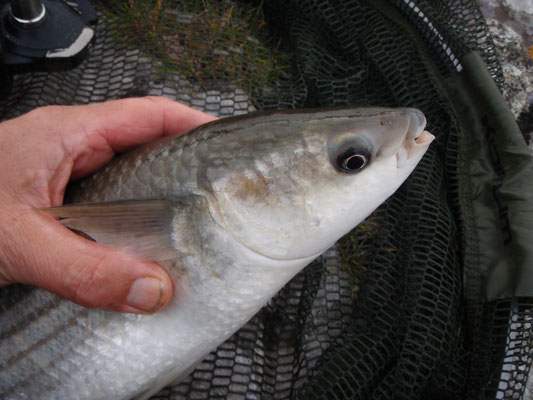