We've been plagued by east winds of varying strength for well over a week now. All forms of fishing seem to become instantly harder with the easterlies blowing; mulleting seems to hold up better than most, but after a few days even the mullet seem to go off the feed.

Wednesday last week I fished a newish mark south and east of Skibbereen, crucially on a west facing shore so I'd be out of the worst. I'd fished the spot briefly a couple of times before and had seen mullet on each visit, but I was yet to catch one there or even have a definite bite. Today I arrived halfway down the ebb tide and immediately saw a couple of mullet working over mudflats near where I parked the car, but I chose to ignore them to go and floatfish some deeper water a few hundred yards away. It was a mistake, and three hours later I returned to the mudflat area without having had a bite.

There was barely a foot of water over the flats now, but I could see a half-dozen or so decent mullet moving around. It was too shallow to floatfish sensibly so I set up my leger rods and cast out a pop-up crust bait on one and flake on the other. I fished an hour or so without a bite but as the new tide started to push up the shingle, some interest at last. I had a couple of very sharp tugs on the flake, but nothing hung on; I missed a half-decent take on the crust; then more tugs on the flake that came to nothing.

By this time mullet were moving close in so, frustrated by my failure to catch on leger, I dropped a float out just past the bladderwrack fringe, fishing flake a foot deep. After a couple of minutes the float bobbed but didn't move away; I left it and after another minute it buried, and I struck into a good mullet that immediately cartwheeled out of the water then ran out strongly.

The fish put up a good scrap. At one stage I had to wade out and free the line from a clump of weed it had swum round, but I landed it without further mishap. I was pleased with this 4lb 8oz thicklip as the first fish from a new venue ...

The east wind strengthened even more over the next couple of days but it dropped for the weekend and on Sunday Sylvi & I went down to Rosscarbery to fish with my friends Pete and Jenny who had arrived from Cornwall on Saturday for a holiday of just under a week. The easterly was just a breeze, but it still looked like being a struggle with the water level very low on the neap tide and the water very clear.

Pete and Jen were fishless by the bridge arch so after chatting a while I left them there and set up my leger rods down on the west shore. The water was almost silly-shallow (at one stage an egret waded through my swim) but I could see mullet moving from time to time so I was hopeful of some action.

About an hour later the first mullet of the day took a fancy to popped-up crust ... but it came off after a minute or so, leaving me to wind in a scale on the hook! Over the next few hours I had four more takes, properly hooked this time, and all held on. The biggest mullet was the last at 4lb 12oz...

Pete and Jenny had a much quieter day. Jenny had a nice fish of 3:10 soon after I left them, trotting a float through on the flow of water coming through the bridge arch.  Unfortunately that was their only action of the day, despite a couple of changes of swim.

Even more unfortunately the east wind picked up in strength overnight and throughout Monday. It was particularly strong on Tuesday when I met them at the mark where I'd had the 4:08 last week. It was semi-sheltered there but we didn't catch.

Other than that they fished at Rosscarbery but struggled for bites, catching a fish each on Monday and just one late in the day for Pete on Wednesday ... his first on the pop-up crust technique. 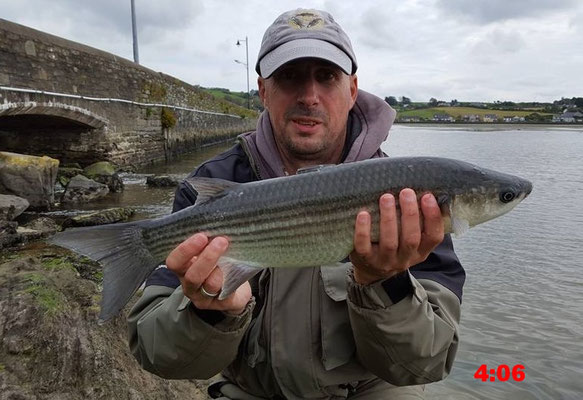 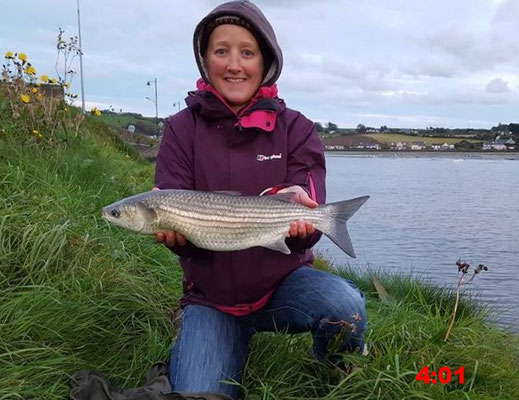 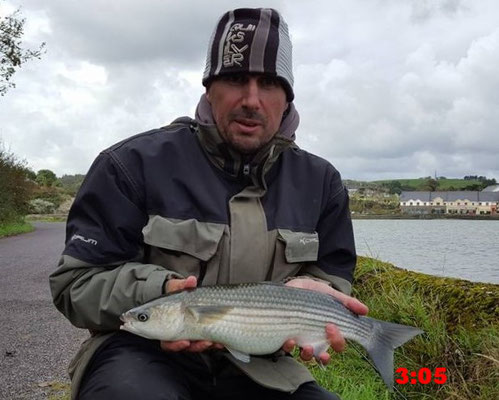 I headed back to Rosscarbery on Thursday, after my car had its NCT in Skibbereen. The car passed, so perhaps a lucky day was in store.

The wind had let up a bit overnight. The water in the estuary was very shallow and the lagoon looked a better option to start.

As it happened I must have struck lucky and chosen a swim with a mullet ready and waiting. I had a bite first cast and missed it, but I was better prepared second cast when the float dipped again.

It was a nice if slightly lean little thicklip of 2lb 10oz, not a monster but my first from the lagoon in over a year so I was happy with that. After returning the mullet I couldn't raise a bite in that spot or two others I tried, so soon after Pete & Jen surfaced for the day we decided it would be better to try the estuary.

Pete & Jen stopped by the bridge arch where Jen promptly had out a 3:11 on leger on her first cast and Pete missed a couple of good takes.

I went down the west side but stopped at the little grassy island, leaving the swim lower down where I'd done well on Sunday for the others later on.

I cast well out as the water was still shallow, and I also had some action on my first cast. Trouble was, I thought the tip movements on my right-hand rod were down to two swans over my bait, and it wasn't till I realised the line was moving off left while the swans were heading straight out that I twigged what was going on. I had to pass the rod under my left-hand rod as the lines had crossed, and by the time I'd sorted myself out the fish was into a snag to my left, a long length of barnacle-encrusted rope part-buried in the mud, and it cut my trace. Great start. The east wind had swung to south-east (right in my face) and was picking up again with the tide. Everything was quiet on the fishing front for the next hour or so, during which time Pete & Jen passed by en route to the swim lower down.

My next bite was a little slack-liner on my left-hand rod. I struck into the fish. It seemed a little subdued and I had it in my net after three or four minutes. The hook had gone through its lower lip from just outside its mouth then into its top lip, so its two lips were stitched together and it may well have had trouble breathing during the fight!

I had weighed the fish and was just doing the photo when I heard the drag going on my other reel - I'd slackened it off just in case, and a mullet had taken the pop-up crust and was taking lots of line. I hurriedly put the first fish into the margins in my landing net, and dashed back to my rod. The fish had run to the left but fortunately far enough out that it was clear of the snags and by giving it lots of wellie I was able to bring it back to my side of the rock. Pete arrived with his landing net to help, but it was another five or six minutes before the fish was ready as it really dug in under the rod tip. It went 5lb 13oz, a lovely fish indeed ...

I set up again expecting the swim to be quiet after all that, but after just a few minutes my right-hand rod lunged over again.

The fish ran left at speed - fortunately I was just baiting up my left-hand rod at the time. Also fortunately it went straight past the snags and once into the shallows on the left side of the island it surrendered quite quickly: 3lb 2oz.

I was beginning to feel a bit uncomfortable about bagging up while the others weren't catching, so I wandered down to see them for a chat and a break.

Pete was at least getting bites but seemed to be in a run of bad luck ... he'd missed another good take, then a fish had broken his 6lb mainline, and while I was there he struck into another ... only to play it in and find it was hooked near the ventral fins.

I drifted back to my rods and had another cast. Incredibly the right-hand one pulled down again after only a minute or two, and after a game scrap I landed another 3:08.

Five in a day was enough. I packed up and catapulted out some groundbait in case Pete might want to move up into my swim, then went down for another chat.

After a couple of minutes, Pete had a little knock on his left-hand rod, perhaps a fish bumping the line on its way to his right-hand bait, because it was his right-hand rod that pulled over.

Everyone was on tenterhooks as Pete played in the mullet, a fairly-hooked 3:10 ...

I left feeling happy that Pete was getting bites on the pop-up crust having changed over to fishing it consistently, and thinking he stood a good chance of a few more fish as the light faded and the wind was dropping again. Alas it was not to be ... he had more bites but they resulted in a broken trace and a fish around 5lbs but foul-hooked again, this time well back from the chin. "One of those days" doesn't really do it justice.