A mixed bag of stuff here covering the last few days; none really seemed to warrant a blog entry on its own.

On Tuesday I grabbed a couple of hours fishing in Bantry while Sylvi did some shopping and had her hair done. The harbour there has a lot of development work going on, including a new pontoon extension for the old railway pier that is currently being used for the Whiddy Island ferry while construction work goes on around its old berth. Swimming and diving are prohibited from the pontoon, but fishing is allowed ...

I set up with sliding float tackle for mullet on the harbour side of the pontoon towards the end. I plumbed the depth - about 14 feet - so set the float to fish around 12 feet and fished breadflake, dropping in loosefeed.

A couple of guys were fishing from the end of the pontoon. One was getting plenty of mackerel on a set of feathers, the other catching them singly on a Toby-type spoon. So it wasn't a huge surprise when my float first slid under after a few minutes and I struck into ... a mackerel. Two more followed, then a few bites that I missed ... maybe a mullet, but probably more mackerel. Sylvi arrived; I changed to a mackerel-sliver bait which upped the bite rate and she landed a few more till we had enough for a good meal.

On Wednesday I headed to a shallow estuary south-west of us. It had fished really well for mullet early on in the season but really poorly recently. Today it was still carrying a peaty stain, the surface was ruffled by a stiff breeze and there was not a sign of mullet moving around. I feared the worst but I did in fact have a few flurries of bites. I should have done better but ended up with just the one fish, 3lb 6oz ...

Unfortunately soon after landing this one the new tide flooded through the bridge arch into the pool where I was and killed the fishing. I'd normally have moved to fish the shallow flats on the other side of the road with leger tackle, but it was so rough by this stage I decided to give it best.

Thursday was a miserable day weather-wise. It stopped raining late in the afternoon and I spent the evening fishing for mackerel from a local pier ...

The float was one of a batch I'd recently bought online, made by Maver. I've not had a lot of call for big waggler floats since I stopped travelling to Alderney but I saw these and thought they might come in useful  here. I remembered being very disappointed with the last few batches of large Middy wagglers I'd used - the stems seemed very fragile and kept snapping on the strike - so I hoped the Maver ones would be more robust. They certainly seem up to the job, though one curious issue is why the 4SSG size apparently takes 5.5SSG shot to cock it properly! Not that I'm complaining, I'd probably have bought a 5 or 6SSG size had it been available, the shot load certainly makes casting the float a doddle and pulls the line through easily till the stop-knot reaches the bottom eye and the float cocks.

Friday was almost a repeat on the weather. This time for my evening session I decided to spin for pollack. There was too much swell running to get onto many of the best rocks, I eventually settled on an area on the south coast where it was just about fishable. I caught a succession of smallish pollack and kept a couple of the better ones, 2 - 3lbs, for a meal. I get the impression bigger pollack are scarcer this year, though in fairness I've not tried a lot having been concentrating mainly on mullet.

Amongst the pollack was a single coalfish about 1.5lbs ... it's early for them, apparently there's a November run (including some bigger fish) that I missed out on completely last year due to work commitments. One of my facebook friends commented that some anglers get muddled up between pollack and coalfish, but when you see them side-by-side the differences are very obvious. He's right, especially the striking difference in the lateral line ... 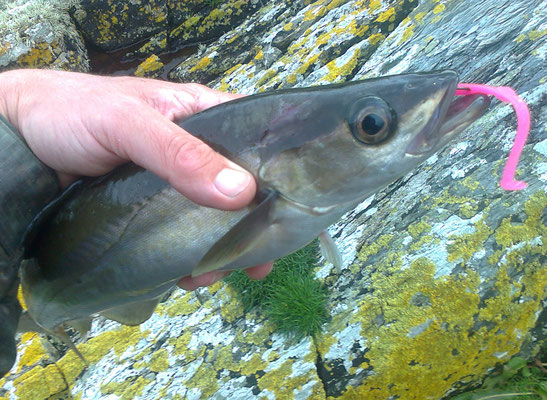 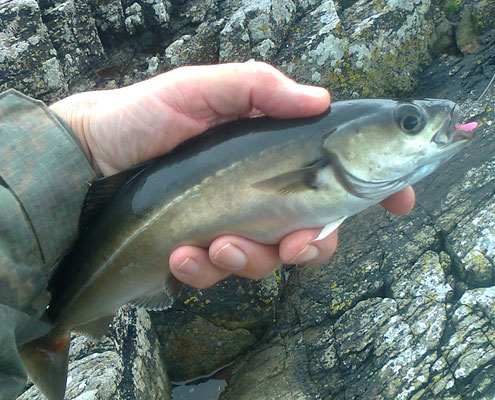 Today, Saturday, I headed south-west again to fish a pier mark near Mizen Head I've been meaning to visit for ages.

On the way I stopped to dig some lugworm and then again by the estuary I'd fished on Wednesday to have a look. It was now crystal clear having been flushed out by the bigger tides and scores of mullet were visible on the flats that had been too rough to fish - typical!

I moved onto the pier, found via a pleasant walk from the road down what appears to be a private drive, then onto a winding grassy track for the final descent down the cliff.

As with so many piers in Ireland, it rather begs the question, why did somebody bother to build it here? But it certainly makes for a spectacular fishing mark. Off to the right, there were some of the biggest and noisiest seals I've ever met in and out of the sea caves. Out in the bay, harbour porpoises showed from time to time.

Alas the fishing didn't really live up to expectations today. The information on the Sea-Angling-Ireland site suggested I'd be fishing over a mixed bottom with the possibility of thornbacks, plaice and bass as well as rock species, but as far as I could tell it was predominantly rough ground. The lugworm attracted only starfish, I had a couple of small pollack on small sandeel baits, and a bullhuss on launce...

I wish whoever had built the pier had thought to put another metre of concrete on top, as it became clear I'd have to evacuate before high tide, and I made my exit as the swells threatened to wash over the deck. I'll be back sometime, but it's one for a smaller tide and/or a flat calm day.