I drove down to Rosscarbery today to fish with Eddie Baker on the last full day of his holiday there. The tides were dropping away in height but I arrived on the high water which may have been somewhat wind-assisted by the strong southerly wind. Whatever - there was enough depth to float-fish along the west bank below the N71. Eddie was already fishing when I arrived, and had just landed a four-pounder. I had barely started fishing a few yards down from him when he struck into another good mullet, and after a long scrap he netted this 4lb 12oz thicklip ... 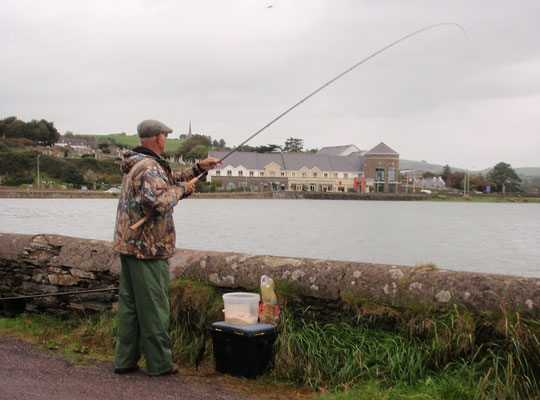 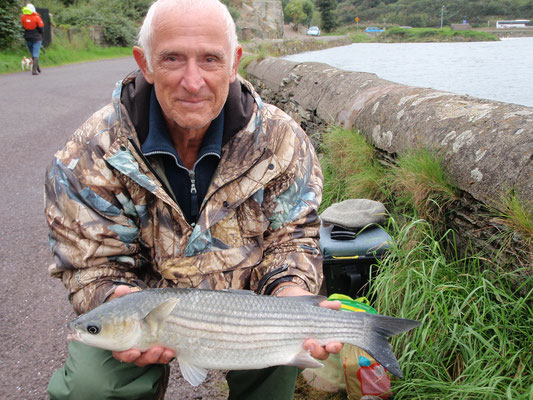 After that I started getting bites in my swim, though I was having trouble hitting them at distance and with a wind-bow in the line and, to be honest, being a bit rusty on the float-fishing after concentrating on legering recently. I was fishing just off bottom but I wasn't sure whether I was getting bites from sizable fish or from the small mullet I could see occasionally on the surface. Eventually I connected with this 3:14 which Eddie kindly netted as well as taking some pics ... 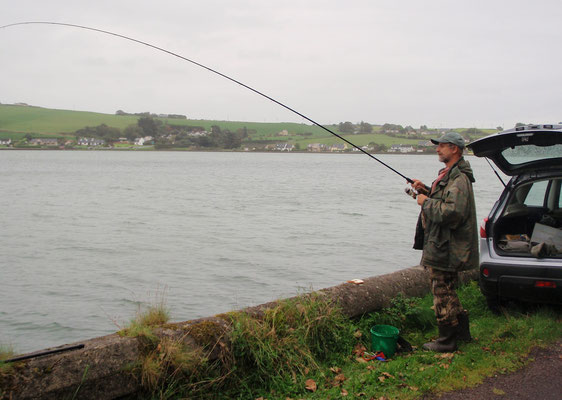 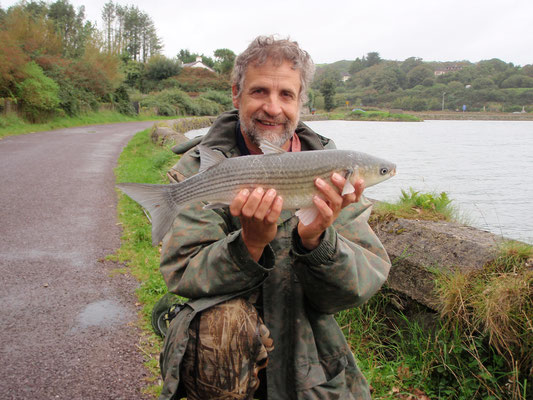 After only a few minutes I was getting bites again, and I must have been getting the hang of hitting them because after only missing two or three I was into a stronger fish that ran out before letting me bring it back ever-so slowly.

Eddie came down again to help me land the fish, as expected a bit bigger than the last one at 4lb 8oz.

The rain that had been spotting became more persistent, and soon it was raining steadily. We fished on and I could see Eddie missing occasional bites. Then suddenly he was into another fish, and the fight seemed to go on for ages. I was about to down tools and go to help him net it when my float slid away and I too was into a good fish. For a while we were both playing our fish at the same time, then Eddie landed his - the best of the day at 4lb 15oz - and mine soon followed, 4lb 1oz ...

Eddie packed up at this stage and went back up to his rented cottage to get dry. I fished on on the float for a half hour or so but could only raise a couple of isolated bites that I missed.

The tide was dropping now and I was getting soaked by the rain, so I set up my leger rods and cast pop-up crust baits well out. I made up some groundbait and catapulted several balls out round my hookbaits, then sat back in my chair in the shelter of the raised tailgate of my car.

It was quiet for an hour, quite surprising but also quite welcome as I got to munch my lunch in peace. Then my right hand rod tip gave a couple of nods and I struck into a decent fish. It was a slightly odd fight in which the fish came in half-way quite easily, gave an unusual salmon-type leap, then several bouts of surface head-shaking as it came gradually closer in. I wasn't all that surprised when it finally threw the hook just outside netting range - pity, a good fish that may have just gone 5lbs.

No great matter; on the very next cast I was in again on the same rod, and this time the fish felt more firmly attached. As I was playing it, Eddie hove into view it - it had more or less stopped raining - and he took some pics of me playing the fish then helped me land it. It was very similar in size to the one I'd lost, and weighed in at 4lb 14oz ...

As I sat chatting to Eddie, attention switched to my left-hand rod which was fishing further out. I missed one good pull-round then hooked a fish that came off after a few seconds. The rain started getting heavier again, and Eddie went back up to the cottage before he got soaked for the second time. I hooked another decent mullet on the left-hand rod which came off half-way in. Then another was briefly on then off.

It seemed like I could carry on getting bites and losing fish all day, but I decided to call a halt soon after 3 p.m. and went up for a cuppa (or two) with Eddie and his wife Suzanne, thanks both of you.

Eddie had enjoyed some great fishing on his holiday. Over three weeks he'd landed 44 sizable mullet of which all but three were over 3lb 8oz ... there are swarms of sub-1lb mullet in the estuary but it's a bit of a mystery where the 1lb and 2lb class fish have gone. Eddie had landed lots of 4s and incredible 17 fish (I think) over the Irish specimen weight of 5lbs including two 6s of 6:02 and 6:04. It's been a pleasure fishing with him and I hope he and Suzanne will be back again in future.