My good friend Steve Smith arrived on Tuesday 6th September for a week of mullet fishing. Steve has had a dreadful year with illness since his trip over last September, but looks to be on the mend again. It was good to see him out and fishing again, albeit a little rusty after his lay-off. His flight into Cork was delayed so the planned afternoon session became a 90 minute evening session.

We went to the spot near Castletownshend where I'd seen the mullet yesterday. It  was even foggier this time. The mullet were there again in some force, but in the end we didn't catch. We had a few knocks and pulls on our quivertips, but couldn't really tell if these were proper bites or just fish bumping into the line. 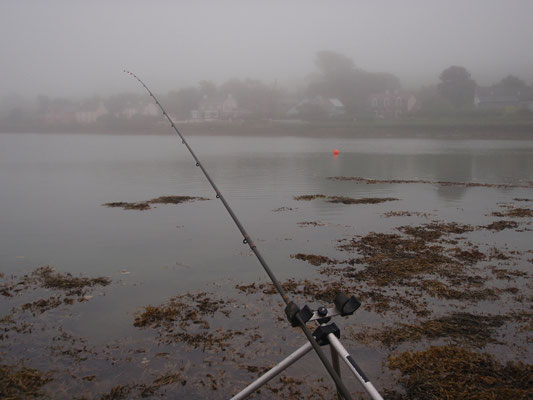 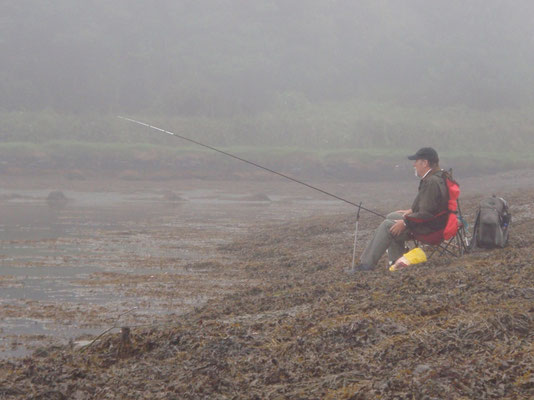 On Wednesday we headed for a rock mark on the north coast of the Sheep's Head to fish the dropping tide. We had a slightly delayed start while I sorted out another float rod for Steve, the tip ring having fallen apart on the one he'd made up earlier. Soon after we started loose-feeding, we started to see mullet swirling in the swim and taking odd pieces of floating bread.

I gave Steve first shot at these fish, but although they hung around for the best part of an hour, they seemed finnicky feeders and Steve could only muster three or four takes, all missed.

After a while the mullet moved on, and although we both fished patiently at various depths we couldn't muster any interest except from occasional small coalfish. Then around low water, suddenly we had mullet back in the swim. We both missed bites fishing a few feet deep, until I hooked one on about my sixth or seventh strike. It was a decent fish but came off after a minute or so, and our swim was dead again.

It was a good half hour before I started getting bites again, fishing deep. We weren't seeing any signs of mullet, and I thought maybe coalfish or wrasse were responsible. I bumped one fish on the strike, stopping the bites again, then just when we were thinking of packing up as the new tide was threatening to wash us off our rock, I struck into a powerful fish.

It didn't feel at all right for a mullet, diving repeatedly for the kelp reef out and to our right and feeling a heavy dead-weight when I managed to recover a little line. My money was on a big wrasse, but eventually a big white belly appeared below us and I winched up the mullet, neatly hooked in its underside. What a pity - it was a good fish too, it would have been my best this year from this mark had it been fairly hooked.

On Thursday we headed for Rosscarbery that had been fishing so well recently for myself and for Eddie Baker who had been fishing there over the past week. We found Eddie on arrival and Steve went with him to float-fish the high tide on the west bank where Eddie had been getting most of his fish, including his 6:02. I decided to let the visitors have the prime spots to themselves and took my leger rods over to the grassy bank by the bridge arch where I'd lost that big fish on Monday evening.

Eddie had already been float-fishing this spot this morning and had only had interest from small mullet, so I cast well out and groundbaited by catapult. I was soon getting knocks and had a couple of decent mullet out in the first hour, 3lb 15oz and 3lb 14oz ...

Next I was into a much bigger fish that streamed line out then found a snag in the middle of the pool. I tried giving it slack line, which it took but didn't free itself. After several repeats I eventually found myself playing just the snag and pulled for a break.

I'd seen Eddie playing a fish but no action in Steve's swim, and while I was retackling he came over to join me. Their float-fishing had been spoiled by hoardes of tiny mullet; Eddie had changed over to leger and promptly had a 5:09. Steve set up on leger next to me but unfortunately he'd missed the best of the action. With the tide now dropping, I had just one last bite, a 3:11 as it turned out. Eddie turned up just in time to take some photos of my playing it ...

It was raining lightly now. I left Steve fishing hopefully and went with Eddie up to his rented cottage for a cuppa, then to buy some lunch for Steve and me. Unfortunately while I was away the rain became much heavier; I arrived back to find Steve sheltering in the bike shed of the hotel across the road, just a bit damp. We got damper still packing our gear away and into the car. The rain eased off again while we sat in the car eating. We didn't fancy the exposed swim by the bridge again, so we parked down the road on the more sheltered west bank and fished a rod each out of the back of the car. There wasn't a great lot of water left and it was quiet, apart from one twitchy bite on my line which resulted in another 3:15 ...

We packed up after that, more than a bit disappointed that Steve was still blank.

Friday was a dreadful day with strong winds and several hours of heavy rain. We went into Bantry to do some shopping in the late afternoon and by the time we were  home it was brightening up. We settled for a quick mackerel session on one of our local piers. Steve caught some chunky mackerel on float-fished sandeel while I caught more but smaller on a shrimp rig, also some small pollack and scad as the light faded. It was nice to see Steve catching anyway ...

Saturday we headed to an estuary mark south and west of us. It had fished well earlier in the year but had been disappointing recently. I was hoping some mullet would have moved in since my last visit but in hindsight perhaps it wasn't the greatest choice for this very neap tide.

There were fish moving around in the deeper pool we fished but most if not all were small. It was very slow with just a few tentative bites that may have been mullet, but probably not big ones. My only better bite yielded this pretty little brown trout.

Later on we moved to the rock mark we'd fished on Wednesday. The worst of yesterday's wind had abated but it was still fresher than ideal and pushing our floats through the swim a little quicker than we would have liked. The only bites yielded small coalfish, pollack and a couple of wrasse.

Sunday we had arranged to fish at Rosscarbery then have a meal in the pub there with Eddie, his wife Suzanne and my wife Sylvi. The water was very low when we arrived and there was a strong southerly wind blowing straight up the estuary. Although it would mean fishing with the wind in our faces, the best immediate chance of getting Steve a mullet seemed to lie in legering from the grass by the bridge arch. We set up accordingly. I soon had a good pull round and a mullet of 3lb 7oz.

Then it went quiet for an hour before another good pull and a similar-sized fish that threw the hook after a few seconds. This turned out to be a blessing in disguise as no sooner had I cast out again than the rod pulled over strongly and I found myself playing a much stronger fish. It ran out powerfully but not far enough to find that snag again, and after a while Steve netted a thicklip of 5lb 6oz for me. At some stage in its life it had lost most of its first dorsal spine and the tip of the top lobe of its tail, but it was all healed up nicely ...

Meanwhile Steve had had not a touch. He was struggling to get any casting distance into the headwind, and this may have been telling with the water close in very coloured. Eddie was about again, he had had three mullet from the tidal lagoon before we had arrived and added another while we were fishing. Steve and Eddie went for a cuppa up at Eddie's cottage, I stayed fishing but the swim didn't produce at all after high water. So when Steve got back we packed up and went for another cuppa!

Refreshed, we decided to head out for another go, this time along the west bank which would be more sheltered. There was more depth than might have been the case on the neap tide, apparently helped by the strong wind. Even so, I think Steve's casting distance again worked against him. He had one half-hearted bite that didn't develop, whereas fishing further out I had two good takes and fish of 4:01 and 3:14. Eddie didn't fish this session but he did arrive with his camera and took some action shots.

Desperate measures for desperate times ... on Monday we visited a tidal pond in Glengarriff. It is usually a banker in terms of finding a few mullet and in that respect it didn't disappoint.

Steve set up some light float tackle and was getting bites straightaway. He missed several before connecting with one, though the immediate thrill of his rod bending over was quickly tempered by the realisation that it would be lucky to make 8oz weight.

Still, it was a pretty little fish and, clearly on a roll, Steve was quickly into another one but slightly smaller ...

After that we moved onto the Beara peninsula but despite finding a peachy-looking swim in Castletownbere we couldn't raise a mullet. We called into the Sheep's Head rock mark we'd fished on Wednesday and Saturday on the way home. The conditions were the best we'd had there, but the mullet simply weren't there either. All very frustrating.

Tuesday - Steve's last fishing day. We headed south-east to fish areas where at least we knew there were mullet around. We started in Casteltownshend village and drew a complete blank - not a mullet sighted in a previously reliable swim. We relocated to the other side of the creek and the mark we'd fished on Steve's arrival last Tuesday. We found plenty of mullet there but they still weren't in a feeding mood; at least they weren't feeding on bread. I'll really have to give this mark some more attention when time allows as there are some good fish present. And so on back to the Last Chance Saloon at Rosscarbery.

The tide was still on the neap side and in contrast to Sunday we were more-or-less becalmed. Having fished its nuts off for weeks Rosscarbery decided to disappoint as Steve, Eddie and I fished four hours for just one decent bite between us. I'd have given anything for it to have come to Steve's rod, but it came to mine. Steve did the honours with the net after a good scrap: 4lb 3oz.