I have to travel back to England tomorrow for a week and Mick will have moved on in his tour of Ireland by the time I'm back ... so one last session together today.

Mick had blanked after I left on Wednesday, and was unlucky to lose two big fish in the lagoon at Rosscarbery on Thursday, but he had four out from the estuary yesterday including a 5:02 and was clearly on a roll as he had a fish on the bank before I'd even tackled up today ... 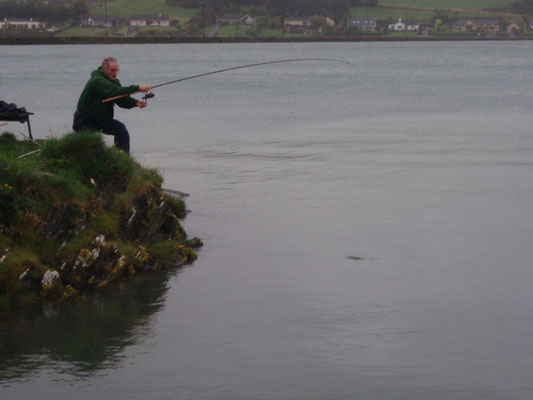 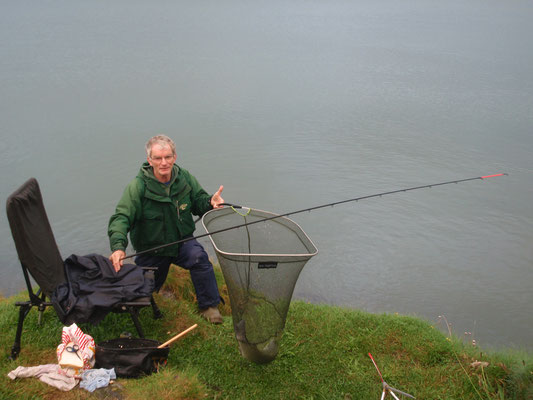 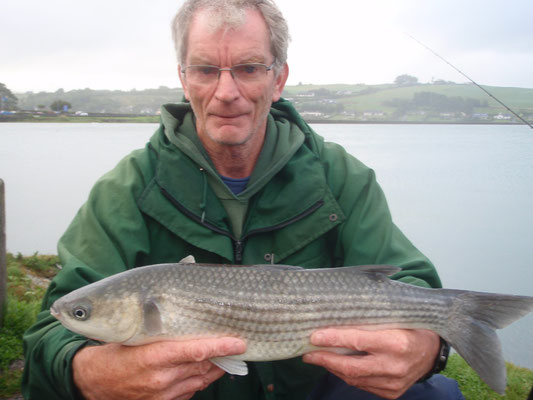 That one was a shade under 4lbs. In fact Mick was off on a stormer of a session and he was into his fifth mullet of the day before I had my first bite some two hours later.

We were fishing on the west bank because it was blowing a gale with intermittent flurries of rain in the wind. I was fishing about a hundred yards to Mick's right in a slightly shallower swim, with two leger rods out in the lee of my car.

When my chance came it was this fish of 2 lb 14oz and I followed it up a few minutes later with one of 2:13.

After that there was a bit of a lull until I had a good pull on my left hand rod. The fish didn't really run but came in quite easily about half way then chugged around. It seemed a strong fish and occasionally it stuck its large tail out. The line picked up a small branch that had blown off one of the trees behind me, and this complicated the fight somewhat as I couldn't always keep a direct line to the mullet. Still, it hung on and Mick came down to help me net it. It was a superbly conditioned 5:04 ...

... but the dog didn't seem all that impressed.

I'd come back to 5-3 at this stage and before long it was 5-4 with an almost repeat performance of the bite and fight (though minus the branch) on the same rod. Another lovely thicklip, this time 5:09 ...

That was my fifth five-pounder of the season. As I returned it I noticed Mick into another fish and that made it 6-4 for the session as we called it a day soon after with the water draining from the pool, the wind picking up even more and the rain becoming more persistent.