Eight days later, the sun is still shining. And the wind has turned west - it's a pity I have work on now! I had to drive into Bantry this afternoon and I decided I could afford the time for an evening session from about half-tide down on the way home.

I chose a rock mark in Bantry Bay near a seafood processing plant.

I arrived to find a huge flock of gulls feeding on cooked mussels that were being dumped still with the flesh in the shells - I suppose they must have boiled up too many.

I helped myself to a few handfuls of free bait, then set up and started fishing. I fed mashed bread and started with bread on the hook.

I had occasional bites over the first hour, some quite delicate that I suspected to be mullet, but the only bites I hit turned out to be small coalfish. Still there weren't too many of the little blighters about, it seemed a good time to try the mussel.

Whether it was the change of bait or just coincidence that a shoal turned up I don't know, but within a minute my float had slowly submerged and I was attached to a mullet. It wasn't huge, 2lb 6oz as it turned out, but it was the harbinger of better fish to come.

As I played it out in the clear water, it picked up multiple "followers", at times as many as a dozen, several looking substantially bigger than the hooked fish.

Unfortunately the only sizeable rock pool was more-or-less full of mussel shells. I returned the mullet as far along the rocks as I could reasonably manage, and said a little prayer it wouldn't swim back through the shoal and spook them.

I needn't have worried. What followed next, down to low water at dusk, was a really enjoyable 90 minutes with regular bites and five more mullet hooked, all landed. In order they were 2:12, 4:06, 4:00, 3:08 and another 4:06 ... good to see some bigger fish on the rock marks here now, possibly back from spawning. The three four-pounders ... 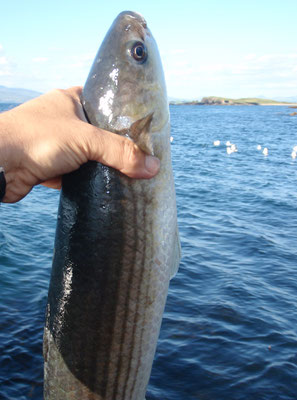 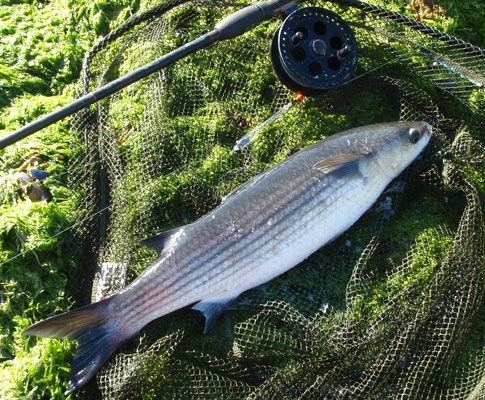 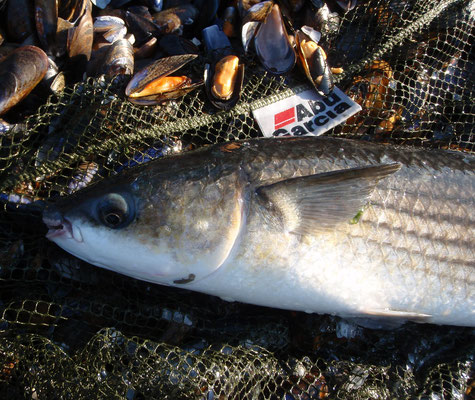