It was a rough old day on the Sheep's Head with Atlantic swells pounding the rocks, so I decided to head for the calmer waters of an estuary on the Mizen peninsula.

I arrived at 4 p.m. which was about high tide, so there was a decent depth over the sand flats below the road causeway. There was a stiff breeze and small wavelets running up the estuary, so I decided it would be best to leger. I set up on a rocky outcrop of the west bank, and cast out two pop-up crust baits.

What was to be a slightly unusual session started ... unusually. On each of the first five casts I had twitchy little bites on the right-hand rod, while nothing registered at all on the left hand rod fishing an identical bait a few yards away. On the sixth cast, a mullet finally hung on and pulled the tip over on the right hand rod again. It was a lively fish though obviously not huge. It ran left, past the other line without tangling it. No sooner had I got to my feet and started shuffling after it than the tip on the other rod, the one that had remained motionless for something over an hour, started banging away! I shuffled back and loosened off the drag, then got on with landing the first fish. It was about 3lbs, I unhooked it and left it in the net in the shallows, then picked up the other rod and played in the mullet on that ... and netted it with the first mullet still in the bottom of the net. The new one was slightly smaller, 2:10 as it turned out and the first 3:00.

After the weighings and photo, I went back to the rods. First bait went out and, incredibly, the rod wanged over before I had even finished tightening the line. It was another mullet of similar size but it came off after half a minute or so.

After the instant action ... nothing ... neither tip moved for over an hour, apart from rebaiting obviously. I thought I'd had my lot but about 6:45 p.m. the left rod lunged over then sprang back without a hook-up. I'd intended packing up at 7:00 p.m. to get home in time for dinner, so I put out a "last cast." Nothing again. As the minute hand reached 12, I started to wind in the left hand rod ... and the right hand rod pulled over. Quick swap of rods and after a good scrap I had another mullet on the bank, 3:01. It was nearly 7:15 p.m. now but I just had to have another "last cast" - and no sooner had I put the rod in the rest and tightened the line than another mullet grabbed the bait. This fish seemed to have more weight about it and it did indeed prove to be the biggest of the day, though not by much at 3:07. Another "last cast"  ... this one proved quiet on both rods and with a drizzle setting in, 7:45 p.m. seemed a good time to call it a day. 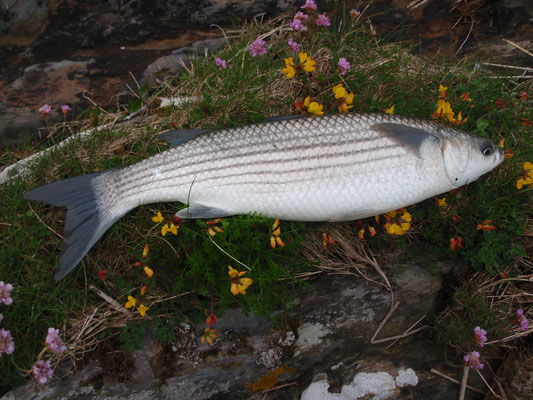 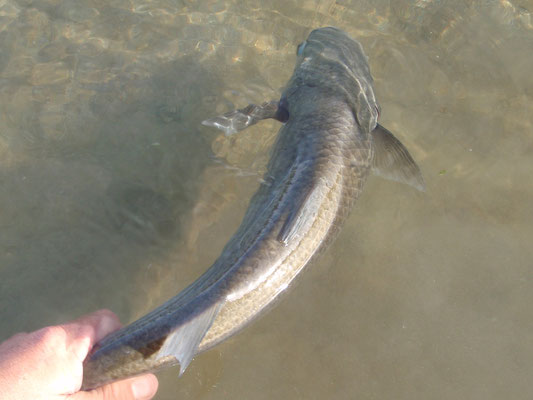