It was a bright if chilly, breezy morning. We decided to have a drive out  and walk the dog somewhere different, and as it was the National Mullet Club AGM back in the UK and I thought it might be a smart trick to catch a mullet to coincide, I put my mullet tackle in the car and we headed for Rosscarbery just in case there were some winter mullet about.

Despite the sunshine there was a perishingly cold south-east wind coming up the estuary. We sat in the car to eat our picnic next to the pool below the road causeway. I kept my eye on the water but saw no sign of fish in an area I'd normally expect to see them if present.

However, as we started to walk the dog down the west bank, we started to see odd mullet in the shallows towards the bottom of the pool ... then a group of fish that bow-waved out as we spooked them ... then a large shoal that was apparently feeding. 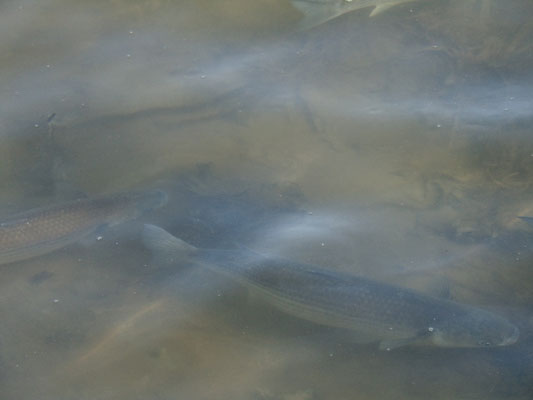 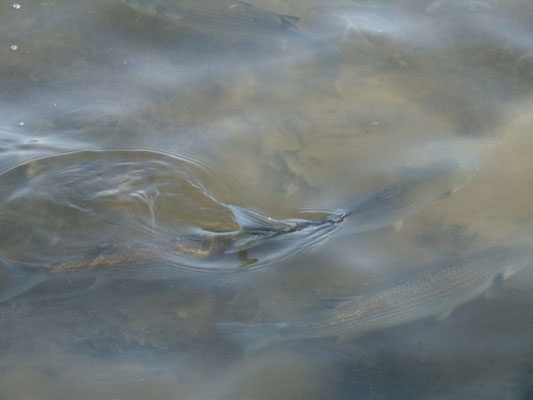 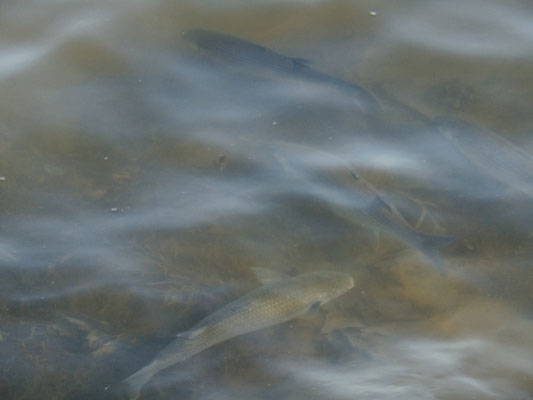 I dashed back to the car to get my kit while Sylvi finished taking the dog for her walk. I crouched as low as possible behind the low wall overlooking the fish, threw out a little mashed bread and sent my float after it, fishing flake about 18 inches deep which I thought would just be laying on the bottom. For the most part my bait was ignored, but after about 15 minutes a fish seemed to linger under my float instead of swimming past ... and the float plunged under.

The fight was a little disappointing to be honest, and after a few minutes I had the fish at the base of the wall where I could just reach it with my net. It weighed 4lb 1oz ...

After that there were still plenty of fish in the swim but it was another hour before I had any more interest, a couple of much less decisive bites that I missed.

Periodically I could see a huge shoal of mullet out in the middle of the pool when they boiled on the surface, usually spooked by a heron or cormorant flying over. A couple of times they went on a mass charge around the pool, an incredible sight, possibly some sort of pre-spawning behaviour. The second time they came close in to the bank where I was fishing, and I pulled my float out of the way to avoid the inevitable line bite and possibly foul-hooking one. As the melee subsided, it seemed "my" mullet had decided to join the throng because my swim was completely empty.