Today was much brighter but the east wind was really howling now. We decided to have a break from the mullet fishing and do some general rock fishing for wrasse and pollack instead.

First we headed to a shallow rocky bay to collect some shore crabs for the wrasse bait. We found plenty of crabs ... but nearly all baby edibles that had to be returned as undersize. The shore crabs were like gold dust ... eventually we got a few but I really need to sort out a better supply, perhaps on the muddier ground towards Durrus. We topped up the crabs with some big limpets knocked off the rocks.

After a bite of lunch, we headed off only a mile or so from home to fish from a rock mark that would be out the worst of the wind and swell in the lee of a headland.

No monsters today but we had a very enjoyable session. I caught some decent pollack on redgills. Steve spent the time floatfishing the few crabs we had and limpets close to the rock edge, catching wrasse up to 3lbs or so. Plenty of the wrasse came to the limpet baits, and they also picked up a number of smallish pollack. 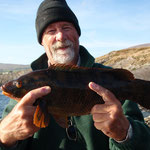 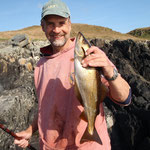 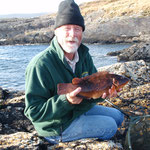 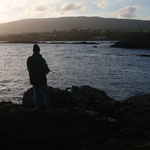